When you think of the Phoenix neighborhood of Tempe, the first thing that comes to mind might be “Sun Devils!” Yes, Tempe, AZ, is home to the Pac 12 school, Arizona State University, but there is so much more to living in Tempe. This small but charming town is packed with history and character. From fun nightlife, to the lush neighborhood streets, to some of the best brunch locations in Phoenix, Tempe has a lot to offer in The Valley of the Sun.

Tempe has Proximity to Other Parts of Town:

One of the biggest draws to Tempe is the proximity to the rest of the Phoenix Metro Area. Tempe is a great location for the frequent flier, because the Phoenix airport is just about ten minutes away. Whether you are getting dropped off or catching a rideshare, easy airport access is paramount to travelers. The epicenter of entertainment, Scottsdale, AZ, is about a five to ten minute drive from Tempe, making it a popular place for young adults to call home.

Of course, as you likely already know; Tempe is home to Arizona State University. The campus is beautiful and inviting, and dotted with unique and fun places to grab a bite to eat or a cup of coffee. Best of all, dogs are almost always welcome!

The stadiums in Downtown Phoenix are ten to fifteen minutes from Tempe, making it perfect for the sports enthusiast. Whatever you like to do in Phoenix, you’re close to it all in Tempe.

Since the dawn of man, desert water features have attracted life. Though we have all the modern amenities of 21st century living, some things never change, and it’s ever apparent in Tempe Town Lake. The beautiful lake reflecting the wide open blue sky beckons residents and visitors to come and enjoy the oasis. Everywhere you look you’ll see families out and about, people walking or biking, children buzzing about on scooters, and even wildlife enjoying Tempe Town Lake. Boat rentals range from paddle boats, to SUP boards, to Tunnel-of-Love inspired swan boats. Gallivanting on shore or hitting the water, it’s easy to waste away the day at Tempe Town Lake.

The northern end of Tempe is full of condominiums, apartments, office buildings, and other high rises. It’s a clear departure from the spread out nature of much of the Phoenix Metro Area. With the luxury of waterfront property in the middle of the desert, you can imagine much of the housing in Tempe Town Lake is expensive. Sleek, modern design is prominent, and you will get much less space here than you would for the same price elsewhere in the city. The proximity to both beautiful views and the outcroppings of entertainment that surround Tempe Town Lake are clearly a strong enough draw to assure plenty are willing to pay the price to call this area home. 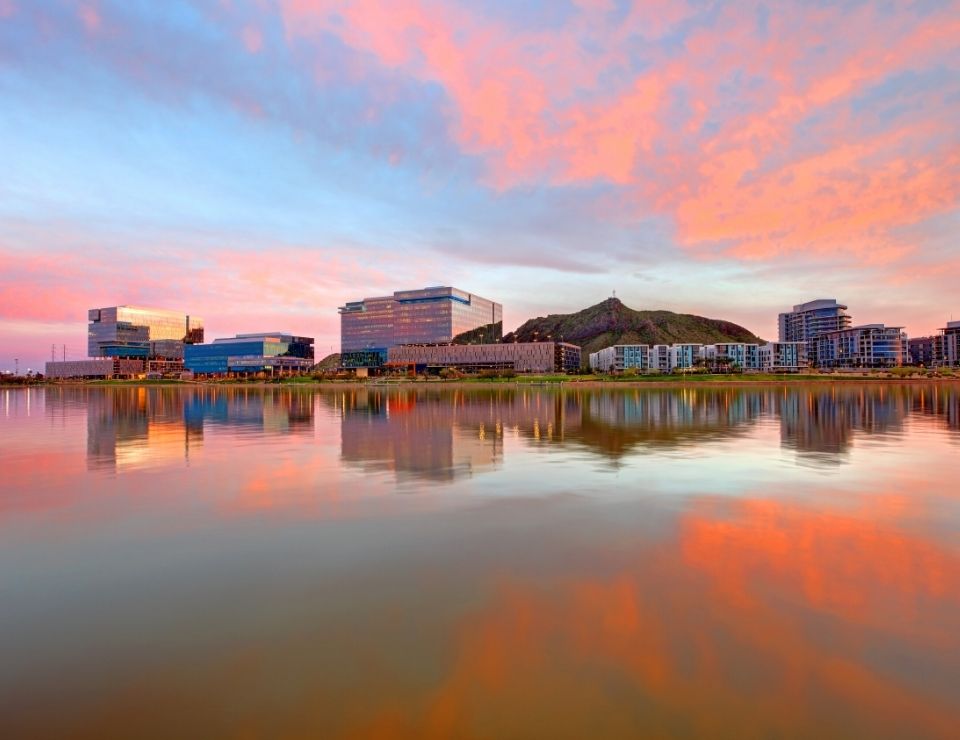 The north and south sides of Tempe are visibly defined due to the highway, I60, running horizontally right through the middle of town. Tempe’s north side is the oldest part of town. With the boundaries of Tempe being pushed inward by surrounding suburbs, you see a lot of upward growth here. This is why there are more and more high rises being built in North Tempe. There’s nowhere to go but up! The north side is also where the ASU campus is located.

South Tempe is a bit more family friendly (though anywhere in Tempe is wonderful for raising a family.) On the south side of town you will find more residential infrastructure. Neighborhoods abound, and buyers will see plenty of new construction homes in South Tempe. If you like Tempe, but want a yard and a large home, South Tempe will definitely be a better fit for you than the north end of town. 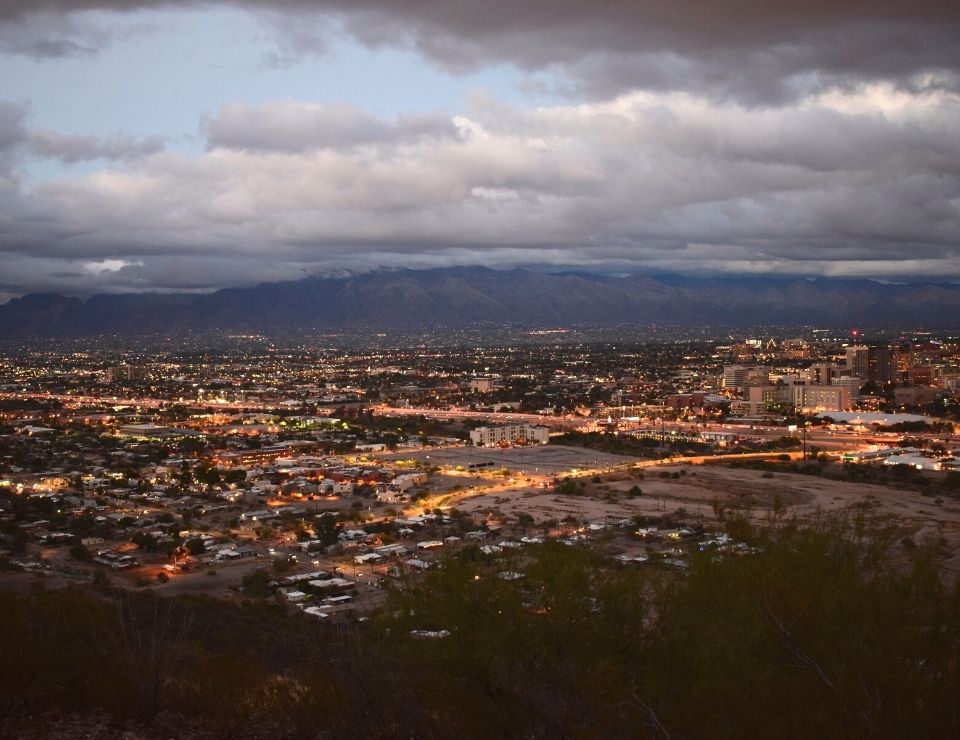 You can’t discuss the nightlife and entertainment scene in Tempe without mentioning Mill Avenue. Mill is the entertainment district of Tempe, and the heartbeat of this college town. As you might expect, you will see a lot of young adults and college kids around Mill, especially because it’s so accessible. On game days this area comes to life with Sun Devil pride. The walkability of this part of town makes for an easy after work pub crawl or a stroll in and out of a few shops. The light rail runs right through the area, so it’s easy to get to Mill Avenue without having to worry about parking or dealing with a car the next day if you plan to enjoy a drink.

If you are looking for a great way to beat that Arizona heat, check out some of the museums in Tempe. Arizona State offers an interesting art museum, and there is of course plenty of fascinating American history to be discovered at the Tempe History Museum. If “feeling the history” is right down your alley, you simply must take a tour of the beautiful historic Niels Petersen House, a stunning Queen Anne style Tempe home constructed in 1892.  As gorgeous as it is, it’s hard to imagine the original residents milling about in that lovely home with no air conditioning in the desert heat! 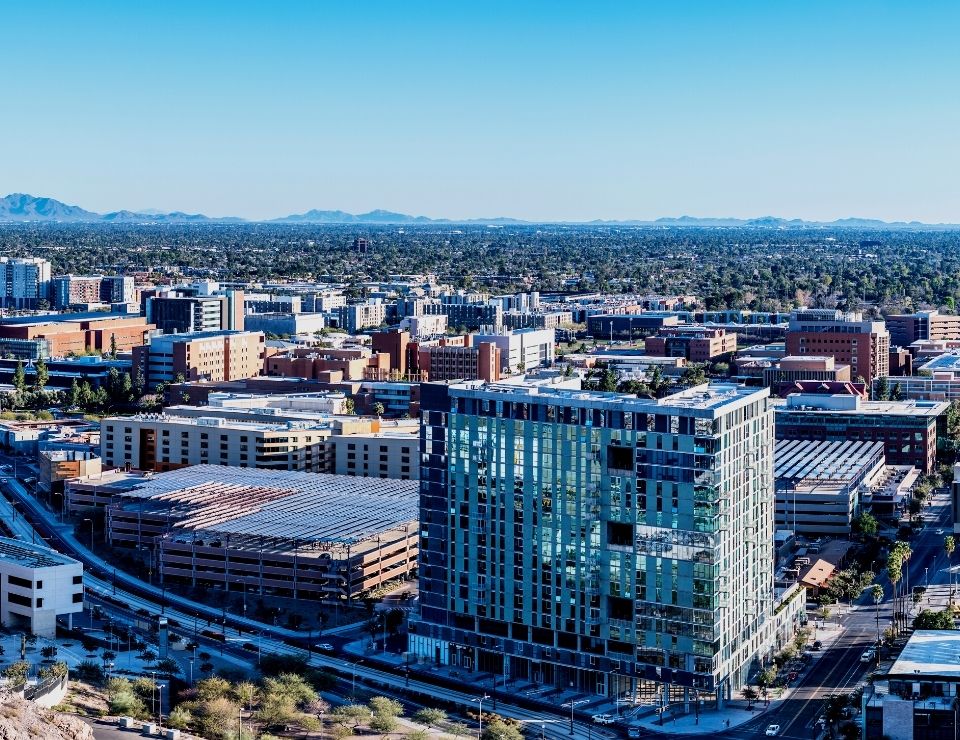 As mentioned previously, in North Tempe the housing is more limited, and you will find a fair amount of apartments and condos. There’s definitely a clear divide between those who feel the new infrastructure is great for the area, and those who consider these concrete giants to be huge eyesore in what was once a sprawling desert view.

The single family homes in North Tempe all tend to be mid century construction, which keeps the area affordable enough if you DON’T want to live in one of the new luxury buildings. This is especially true about the neighborhoods bordering the ASU campus. The new housing being built in South Tempe isn’t cheap either, but it does come with a few more modern amenities, and usually bigger plots of land.

When people are relocating to the Phoenix area, Tempe often gets overlooked as a potential neighborhood to call home. It’s sometimes written off as a college town, with old housing that is falling apart and wildly expensive because the students (or their parents, at least) will pay for it. This is to an extent true. Much of the housing in Tempe is older, and it won’t be as affordable as other parts of town. Neighborhoods such as Chandler or Glendale will have newer, bigger homes, with nice yards for a significantly smaller price point. But if you’re willing to open your mind to homes that might not look like all that much on Zillow, you can find some really unique older homes in Tempe that have a lot of character and charm. Who knows, there could be a cute little bungalow out there with your name on it!

Another draw to living in the Tempe area is the lush, mature landscape and greenery. Because this is one of the older parts of Phoenix, many homes have large, established trees and bushes in the yards. The streets and even shopping areas have a greener feel as well. If you are moving to Phoenix from a part of the country that has this green feeling, you will definitely notice the difference in most of the Phoenix Metro Area. In this land of cactus gardens and rock landscaping, the greenery is a true respite.

Learn More: Top FIVE Things to do in Phoenix, Arizona

We’ve mentioned multiple times that Tempe is an older part of town. But don’t for a second think it’s lost in the past. With the draw of young people to the university, as well as the spectator sports, Tempe is up to the task when it comes to staying on the cusp of the new and exciting. Shopping centers and gyms are popping up all over Tempe. You can find everything from standard weight lifting, to trendier workout options, like spin classes or the ever popular Orangetheory. Artisanal coffee shops are all the rage in Tempe, so you can find a favorite “local spot” almost anywhere in town you might choose to live.

The concept of social drinking and dining has really been embraced by Tempe. The Yard, for example; is an excellent place to grab a flight or a bite (or both) and relax in the hip, indoor/outdoor environment. The Yard also offers live music, games, and cozy, intimate seating arrangements. If you are looking for a fun girls night out or family friendly event, you can find plenty of fun activities in Tempe. Residents can enjoy everything from cooking classes, to Wine and Paint events, to the latest craze – axe throwing. Who doesn’t want to make some homemade pasta then huck an eight pound farm implement through the air?

Looking to move to Tempe, Arizona?

Thinking of making Tempe, AZ, your new home? Reach out to me today, I would love to help you find your next home in the Phoenix Metro Area!

← Pros and Cons of Living in Gilbert, Arizona Living in Central Scottsdale Arizona → 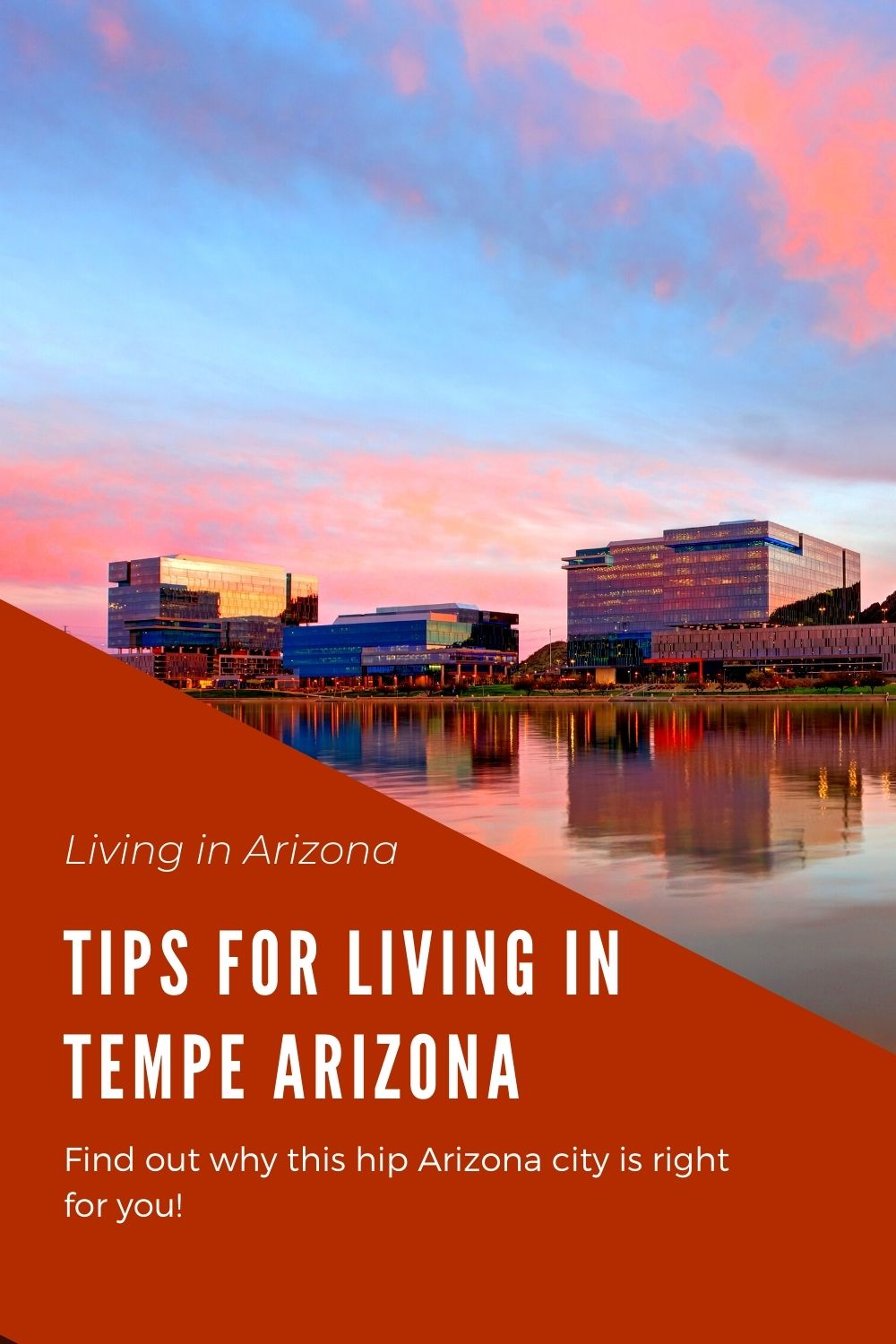 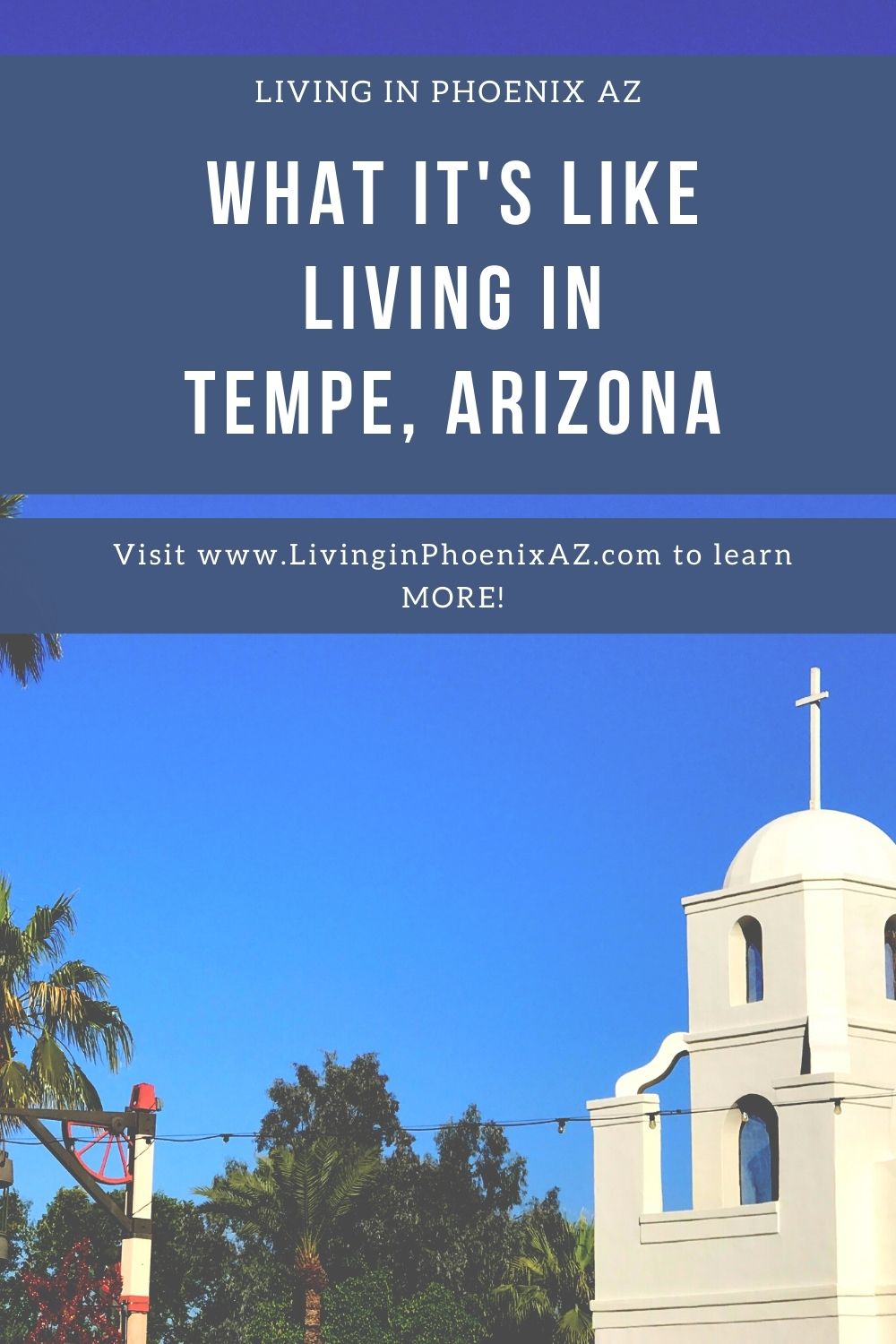 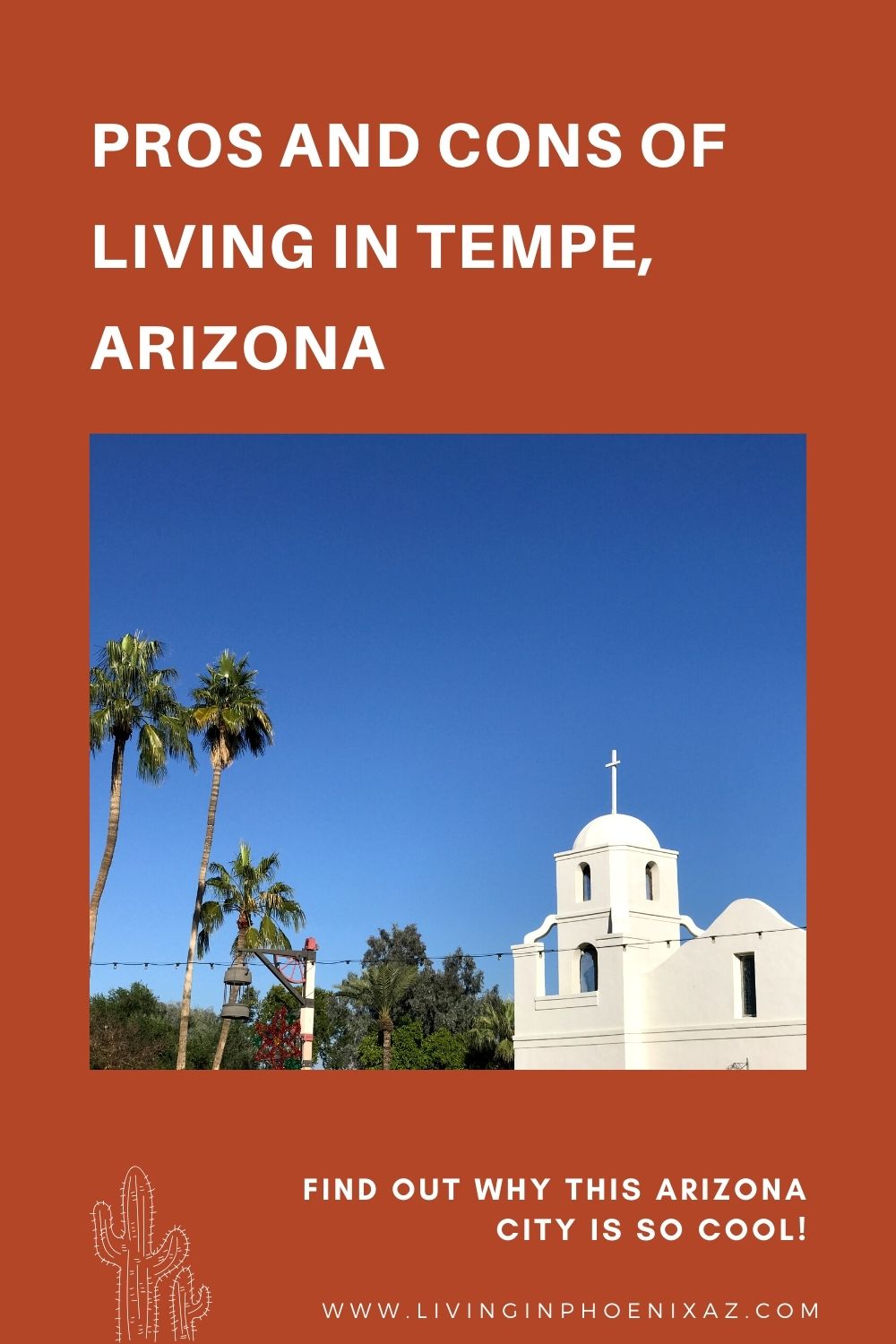 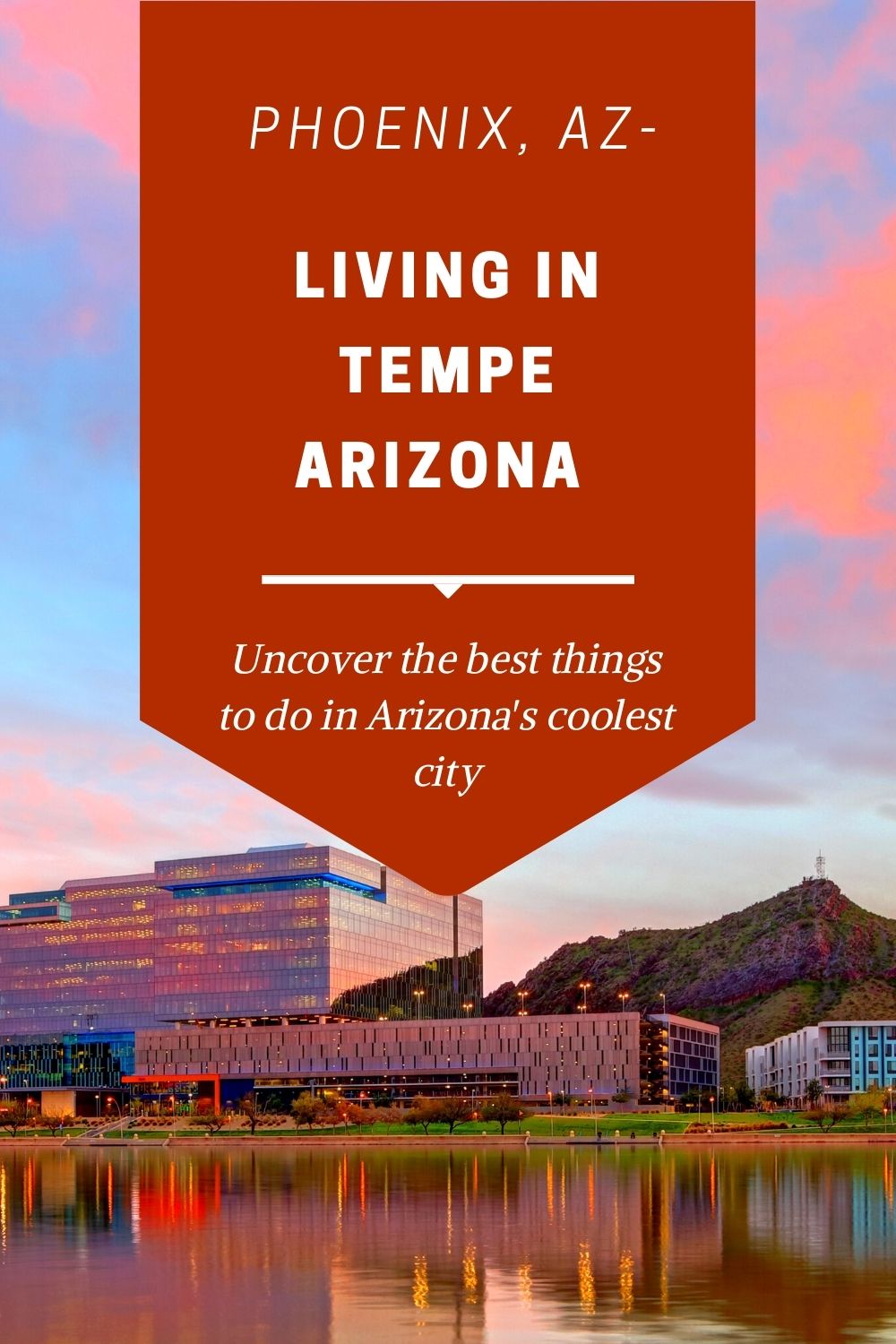