The Five Worst Neighborhoods to live in Phoenix, Arizona 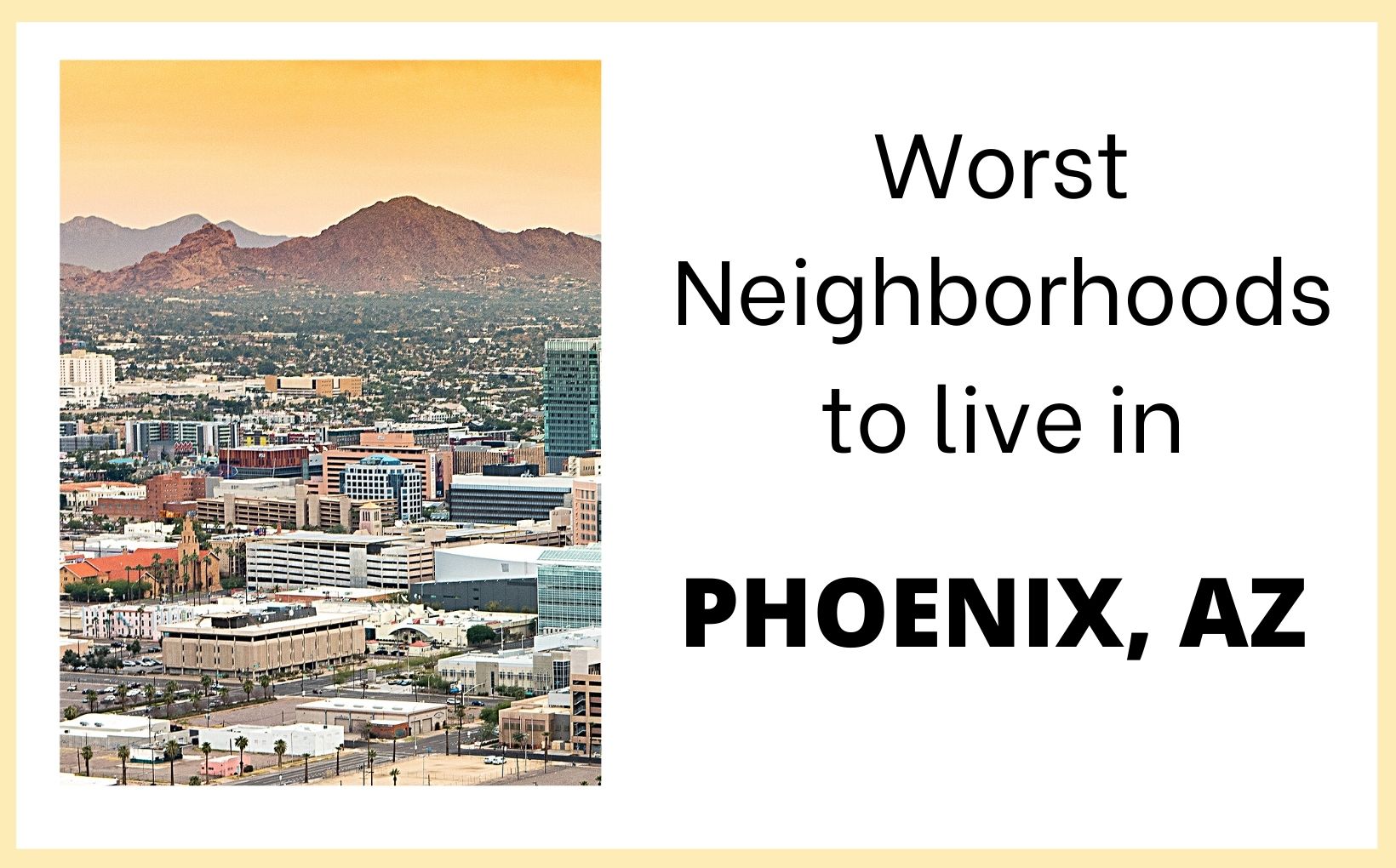 Consistently ranking as one of the best places to live in America, Phoenix, Arizona seems to have nothing but fans everywhere you look. But with so many great neighborhoods in Phoenix, it can’t all be roses. What about the worst Phoenix neighborhoods? In a city so big, there’s always going to be a few places that are…well let’s just say a little less than savory. Sure, the entire city seems to emanate easel worthy sunsets and tacos at every turn, but if you’re thinking of calling it home, let’s check out some of the neighborhoods to avoid in Phoenix.

*Disclaimer: By no means do we claim to know absolutely everything about Phoenix and its suburbs. These findings are strictly based on data, crime rates, school ratings, and other hard facts. You might live in one of these neighborhoods and think it’s the best, safest place in the world, and that’s great too! These are just (statistically speaking) some areas that could use a little work in one or more categories.

Why do people say you shouldn’t live in southern Phoenix?

Much of the southern portion of Phoenix has a bad “look” to it, and a lot of that has to do with old housing that needs work, yards that are chain link bordered and full of junk, and sidewalks that are splitting and broken. But many of the neighborhoods in the southern part of the city are just that, old.

A great deal of these homes are full of residents who have lived there for sixty years and have no plans to leave. You’ll find a lot of blue collar families and elderly families in neighborhoods like Alahambra and Encanto, and often once you get to know the area, you see it’s pretty safe as long as you stay aware. And shouldn’t we all be doing that no matter WHERE we live? 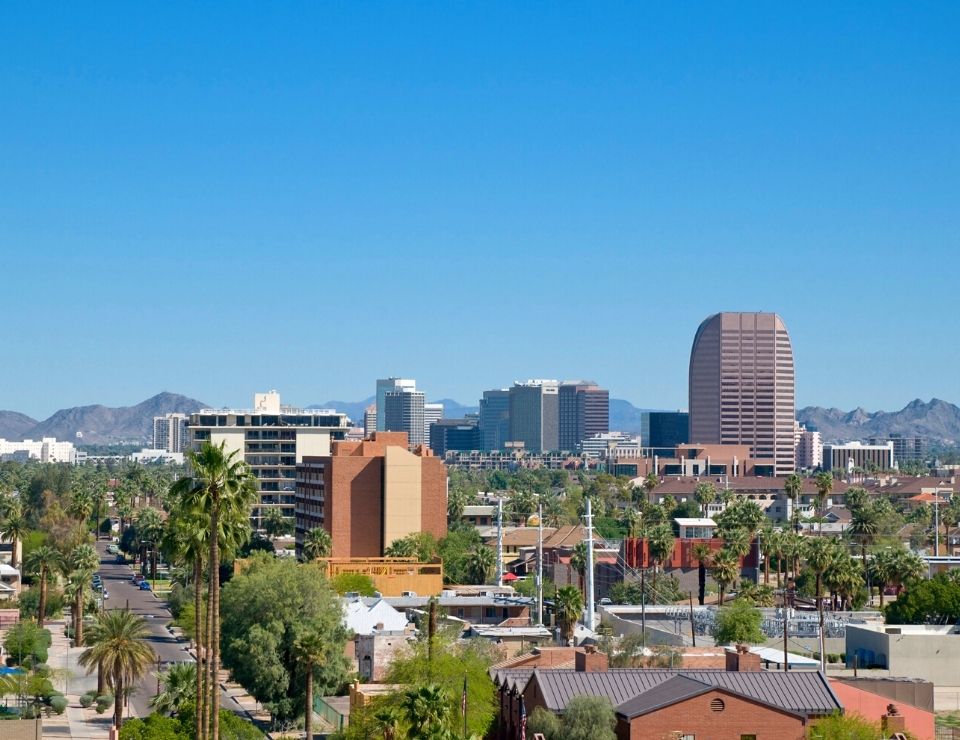 Neighborhoods to avoid in Phoenix

Central Village is consistently rated the least safe neighborhood in Phoenix. It’s also one of the oldest areas of town. The historic infrastructure can be really interesting, and there are some really beautiful old homes in this area. Unfortunately, like many highly populated inner city areas, the further you get into dense populations, the higher the crime rates go. Central Village has been riddled with crime for decades, but it’s actually getting better as the years go by. Still, it’s extremely common to see break-ins, muggings, and even shootings in this area. The crime rate in Central Village is over 500% higher than the national average, a hard fact that can be particularly hard to swallow.

Within Central Village is the Downtown Phoenix area, including Chase Field, where sporting events are held. With the traffic that downtown draws, there are definitely times of the day in which the area is safer than others. Midday on a Saturday during a ballgame is probably totally fine, but the same area at 11:00 pm when fewer people are around might be a different story. The downtown area was designed with walkability in mind for just this reason, and many find it to be completely comfortable to visit, even if they wouldn’t want to live there. 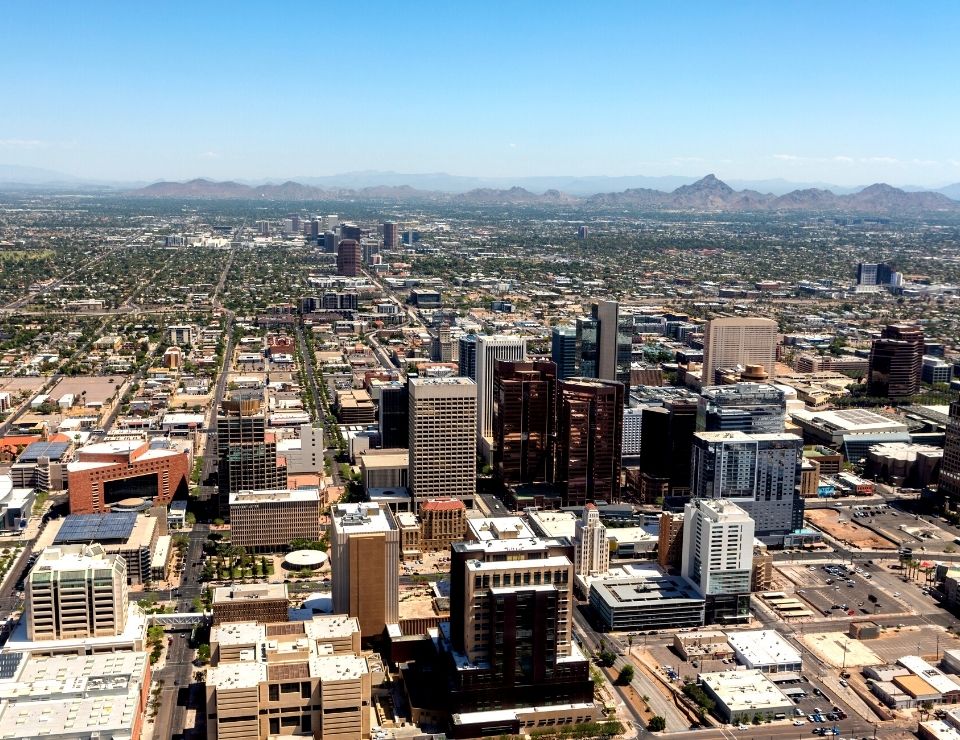 This beautiful, nature rich area includes over 16,000 acres of preserved natural desert forestation. Its beauty can be deceiving, as South Mountain has been historically unsafe for many years. In the past, South Mountain was home to the largest concentration of low income families in Phoenix. It still ranks as highly impoverished, though like Central Village, it’s getting better. Still, there’s a pretty prominent gang culture in South Mountain, and the chance of a resident being the victim of a crime is 1 in 22.

The closer you get towards the actual mountain part of South Mountain, the safer it gets. There are indeed some beautiful homes nestled at the foothills of the mountains, putting residents right at nature’s door if they want to get out and enjoy some hiking or backyard dining al fresco. Like any neighborhood, just be very aware and do your research before moving in. 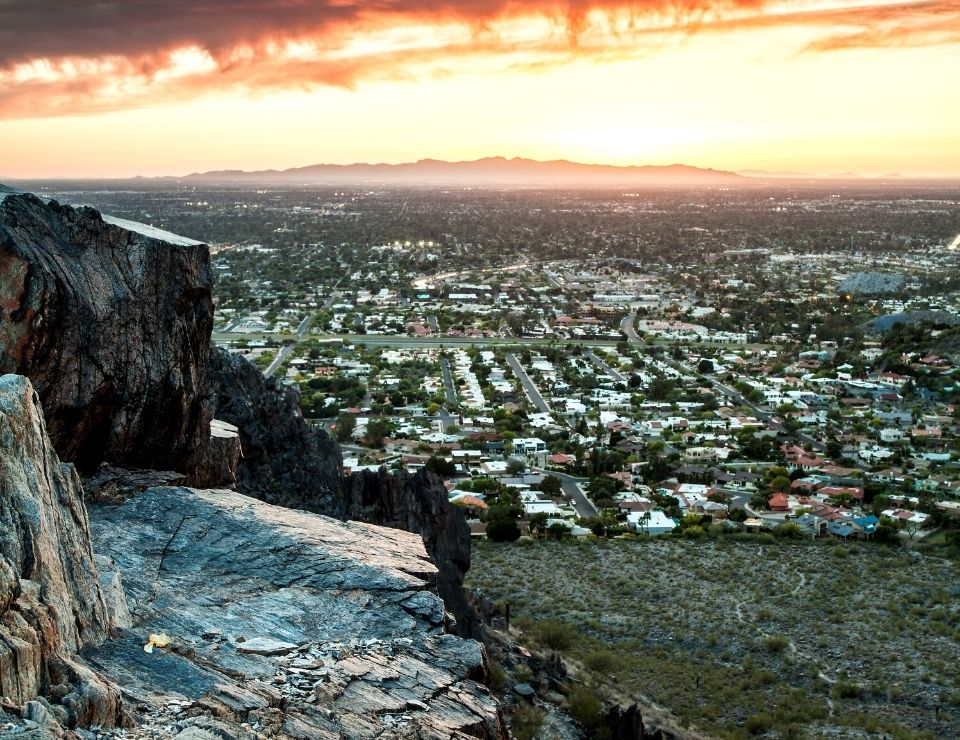 In the 1950’s, Maryvale was mapped out and projected to be Phoenix’s first master planned community. Designed to be a comfortable and safe place for middle class families, the “Pleasantville” vibe just never really took hold in this neighborhood.  Throughout the decade it continued to be a rather unsafe area, with some times being worse than others when violent crime rates were at all time highs.

With other neighborhoods popping up around Maryvale (especially Glendale) and bringing up property values, it’s gotten significantly better. There is still a lot of crime, but it tends to be vandalism and property crime, as opposed to violent crimes like shootings, muggings, and domestic violence. According to residents, you still hear a fair amount of gunshots in Maryvale, so obviously violent crime hasn’t been completely abolished.

Maryvale borders the bottom edge of the Glendale neighborhood, a well known safe place to raise a family and call home. Glendale is one of the most popular areas in Phoenix and it’s done an excellent job cultivating a family environment, which has certainly elevated the living situations in the cities that it borders.

Learn More: What it’s like living in Glendale, Arizona

The urban village of Alhambra was one of the first subdivisions in Phoenix, and much like Maryvale, saw most of its growth in the mid 20th century. In the 1940’s and 1950’s, this neighborhood experienced a boom in population as military families stationed at the nearby Luke Airforce Base thought it looked like a great place to call home. To appeal to these families on a meager military budget, lower income housing was constructed, much of it still standing today. With 60+ year old housing, it remains a pretty affordable place to live. The affordability keeps it in the low income category, and many low income areas are subject to crime.

The crime rate in Alhambra is 165% higher than the national average. Much of the crime here is theft. As a rule of thumb, locals say the safest part of Alhambra is east of highway 17. Reviews from locals are mixed, saying everything from “dangerous and unsafe to walk alone at night” to “safe place, just low income.” You can take the info with a grain of salt, and decide what safe feels like to you.

Encanto is a quiet neighborhood, and though it makes our list of worst neighborhoods to live in Phoenix, it’s definitely the lesser of a few evils. The crimes in Encanto tend to be nonviolent home invasions and property theft. It’s common to have things stolen or graffiti’d in Encanto, but pretty rare to be mugged at gunpoint. Some of the older homes with unkempt yards give the area a look that’s less than visually pleasing.

Encanto is full of people of all ages, but there’s a particularly large number of families that have been there for a really long time, and like the area for all its quirks. Many locals say they feel completely safe biking and walking around the neighborhood. While it’s a quieter neighborhood, it’s still not a place where young children should play alone in the street. After all, remember Phoenix is a big city, and like Los Angeles or Chicago, it’s not the same for children growing up in the city as opposed to suburban sprawl in the Midwest. Still, Encanto remains a place where you can affordably own a home, as long as you make sure to lock the doors at night, and maybe lock up the bikes. 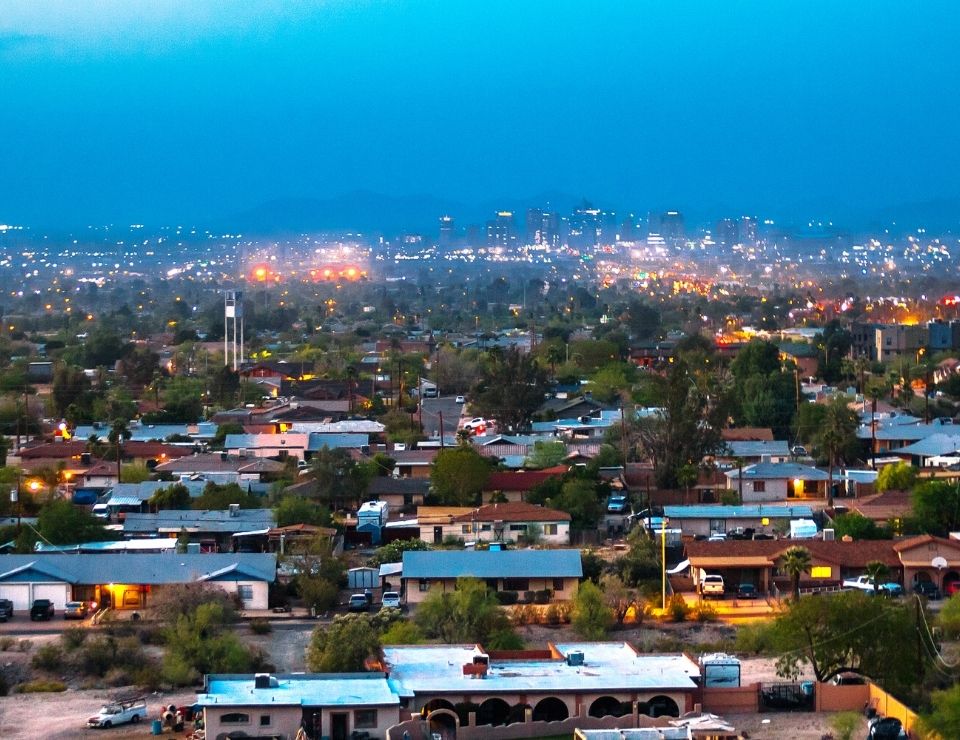 Note on History of Crime in the PHX Area

You might have noticed that many of these areas have a common theme, they’ve been crime-ridden for decades, some longer. It’s important to note that the ability for an area to break out of the impoverished, high crime category is almost as difficult as it is for people to break free of the poverty cycle in itself. When neighborhoods become more expensive, it forces low income families out, and they have to retreat to areas of town that are still affordable. Therefore, these people can never really be a part of the neighborhoods up and coming.

Areas that have remained more affordable stay a hot bed for people who are within the poverty cycle, and cannot break out. In this cycle it’s extremely difficult to shake ties with gangs, criminal histories, or petty crime, especially if your needs are not being met by your income means alone. Because of this, many of these neighborhoods are likely to remain unsafe. If you plan to move to one of these areas for any reason, do your research. They are not “bad places full of bad people,” they are just host to a very diverse group of individuals from an array of socioeconomic classes.

Having exposed the less than perfect aspects of Phoenix, there are so many wonderful things this beautiful desert metropolis has to offer! If you’re thinking of moving to the Phoenix Metro Area, reach out to us, I would love to help you find your dream home and make living here your reality!

Subscribe to stay up to date about Living in Phoenix 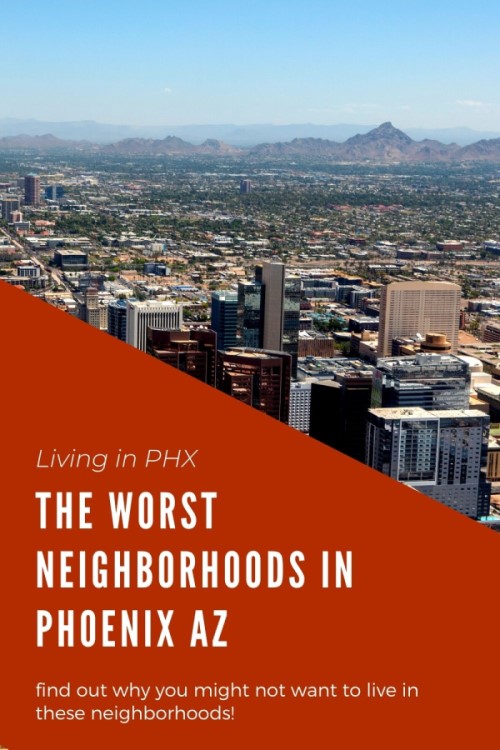 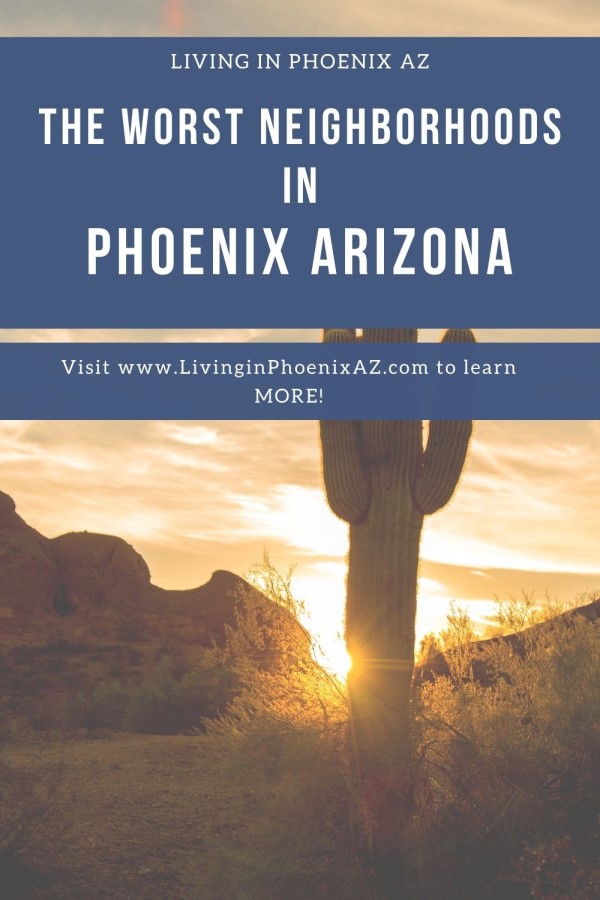 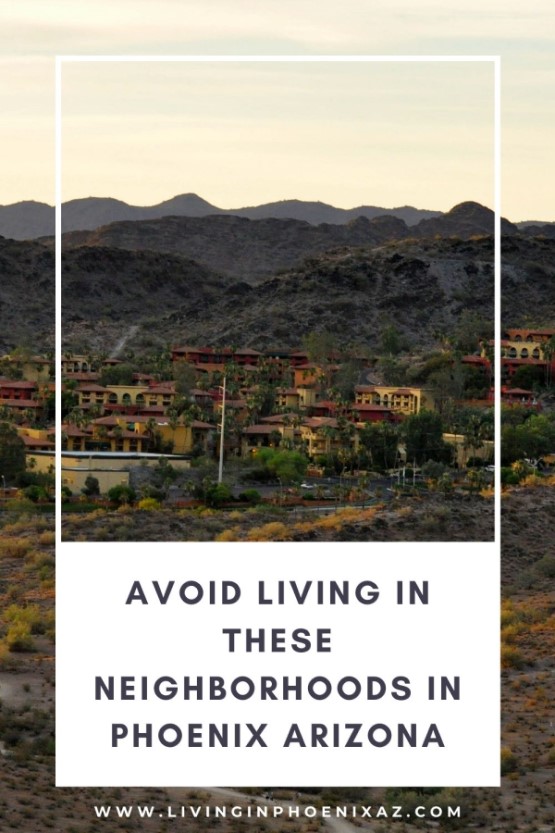 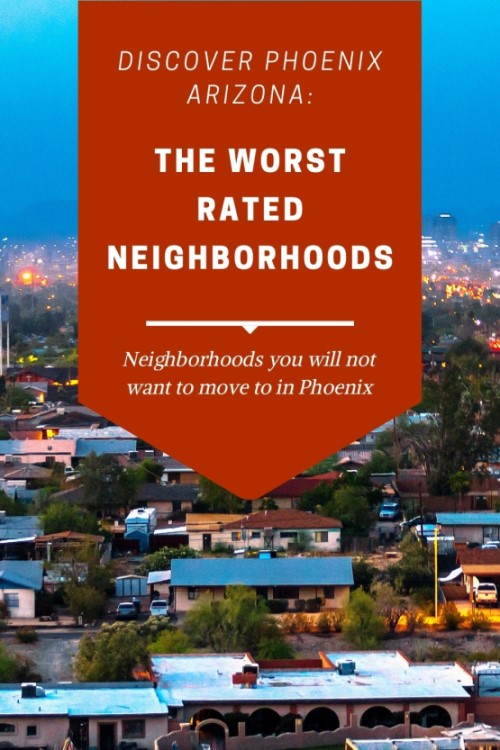