As the Phoenix Metro Area grows annually, Americans are uprooting from all over the country to find a new home in the Valley of the Sun.  With a growing population comes an unfortunate ever present reality, a higher crime rate. The crime rates continue to rise in the area, but we have a list of some of the safest neighborhoods in Phoenix, Arizona.

Whether you’re coming for the excellent weather, affordable living, or superb school systems, don’t let the fear of crime keep you from this desert oasis. Like anywhere in the United States, there are less than savory areas, and also beautiful, safe parts of town. Doing a little research before you’re wheels up for the west can make all the difference! There are great parts of town with extremely low crime rates, so let’s check out five of the safest neighborhoods in Phoenix, Arizona.

A quick look at the crime rates in Phoenix could alarm the newcomer, as some studies show crime rates to be as much as four times higher than the national average. While this is alarming, a few caveats to keep in mind can help put your mind at ease.

#1 First of all, Phoenix is a huge city. It’s almost as large as Los Angeles. With that many residents, crime rates just naturally go up.

#2 Also, remember that the size of the Phoenix Metro Area also means that the area you want to live in might not be anywhere near the parts of town with the highest crime rates (such as Downtown Phoenix, Central Village, or Glendale.)

#3 Finally, most of the crime statistics about Phoenix are highly localized to inner city areas; but that won’t show up on a percentage of crime chart, so the entire city reads with the highest crime rate of one small area.

The above is why it’s important to know which of the many areas of Phoenix is the safest to live in (don’t worry there are plenty, we’re just going to cover a few of the safest neighborhoods here). And in fact, year over year, Phoenix’s crime rates have DECREASED by 6%! Don’t let the stats of Phoenix’s crime rates, dispell you from experiencing what the Valley of the Sun has to offer.

Learn More: What is the cost of living in Arizona vs California?

Five of the Safest Neighborhoods to live in Phoenix, Arizona 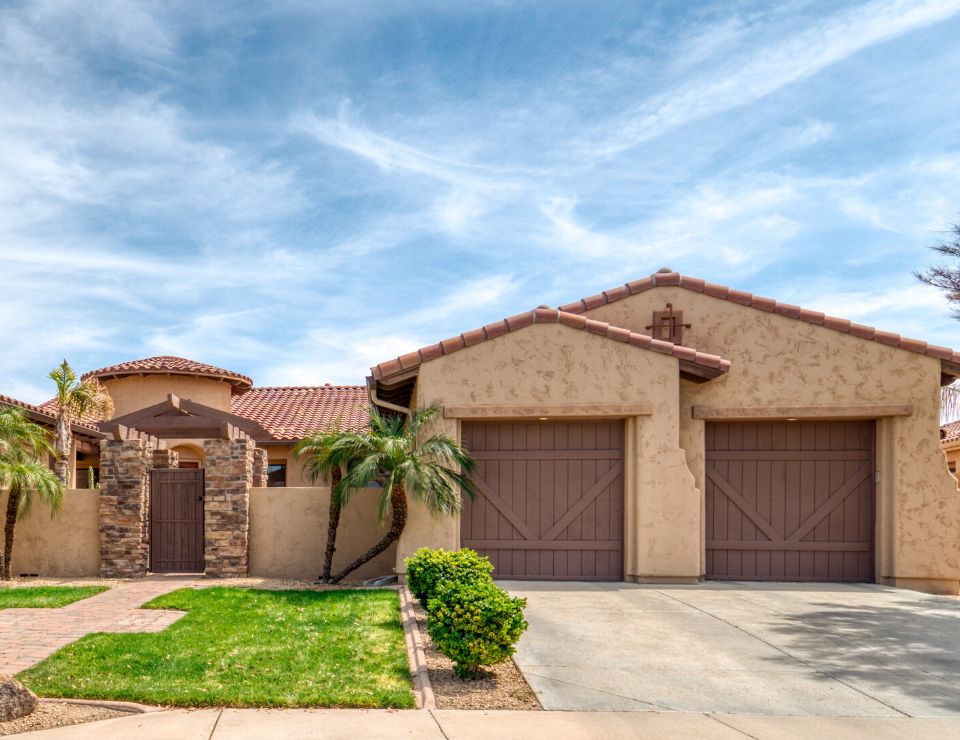 A lush part of town with beautiful, sprawling scenic desert views (hence the name), this Phoenix neighborhood combines both nature and urban living. A perfect place to raise a family, Desert View has plenty of parks and playgrounds to enjoy. Desert View is known as one of the smaller urban villages in Phoenix. The population is just above 50,000.

Crime in Desert View is 69% lower than Phoenix, and 48% below the national average. Adding to the safety of Desert View, the crime that does take place is primarily property crime. The violent crime rate in Deser View is 63% lower than the national average.  No crime is good crime, but the fear of being mugged while you’re walking the dog is perhaps more unsettling than the fear of vandalism to your mailbox or a bike being stolen from the yard.

And beyond its low crime rate, Desert View is known for its beautiful views of the Sonoran Desert and surrounding mountains. 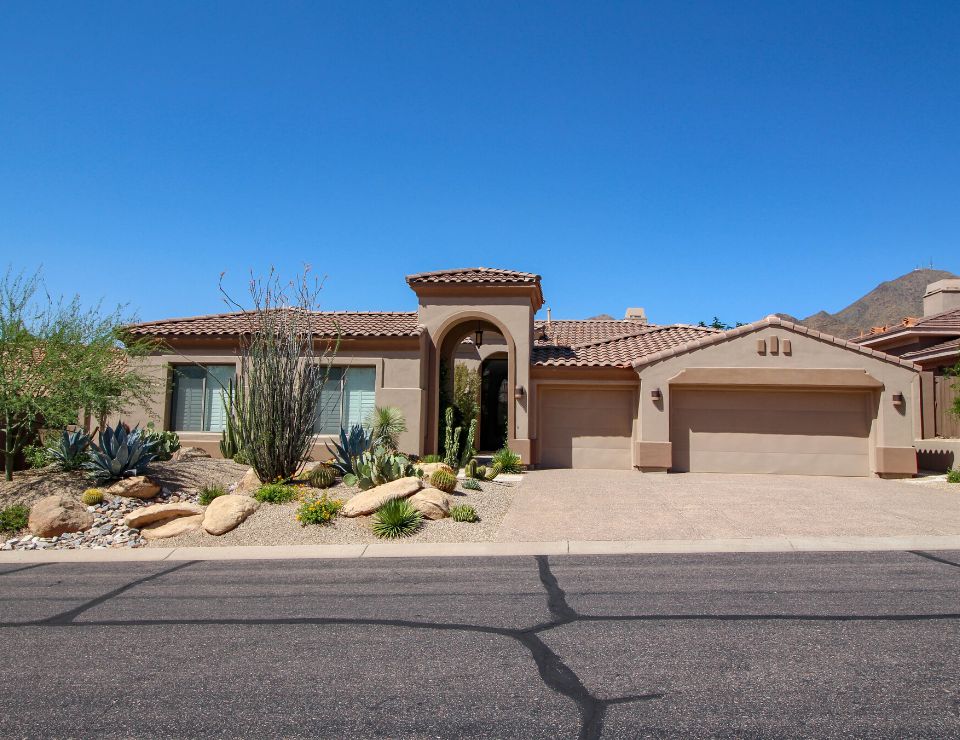 Just west of Desert View is the equally beautiful & safe neighborhood of Phoenix, North Gateway. Like Desert View, this area has stunning views of the vast Sonoran Desert, where residents can enjoy living close to nature with excellent amenities.

Though similar in landscape to Desert View, North Gateway is made up primarily of master-planned communities. These well designed neighborhoods specifically cultivate an environment with every amenity one could need close to home. Large scale residential neighborhoods such as these have beautifully built in entertainment, healthcare facilities, dining options, drug stores and grocery stores laid out from conception.

It tends to be pricier to live in a master-planned community, which is understandable when you consider all the wonderful things you’ll have close by, from tennis courts and parks to a down the street drug store for late night emergencies.

Though you should never say never, crime rates in master-planned communities are noticeably low, this area is known for it’s safe community feel. 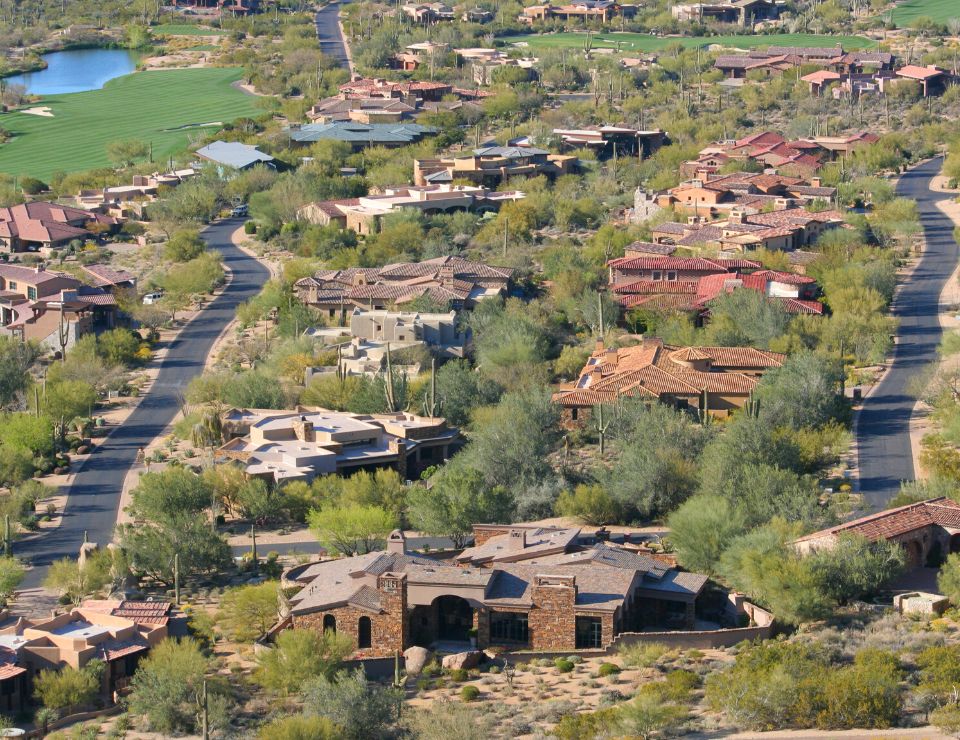 Located between Paradise Valley and Desert View, the Deer Valley neighborhood of Phoenix provides residents with more than enough options for keeping busy!

Outdoor enthusiasts love the proximity to nature preserves and parks such as Cave Buttes Recreational Area and the Deer Valley Petroglyph Preserve; an area over 47 acres rich with desert history. Hikers, mountain bikers, and other outdoor lovers who live in Deer Valley can take advantage of the beautiful Arizona weather while staying close to home.

If you find entertainment of the indoor kind more enticing, check out the Norterra Shopping Mall, or Six Flags Hurricane Harbor. With so many fun activities, it’s easy to see why people flock to Deer Valley. But despite its growing size, the crime rate remains low, at 17% lower than Phoenix, and is safer than 66% of Arizona cities.

Along with families, Deer Valley continues to be popular with retirees, in fact; one in five Deer Valley residents is over the age of 55! 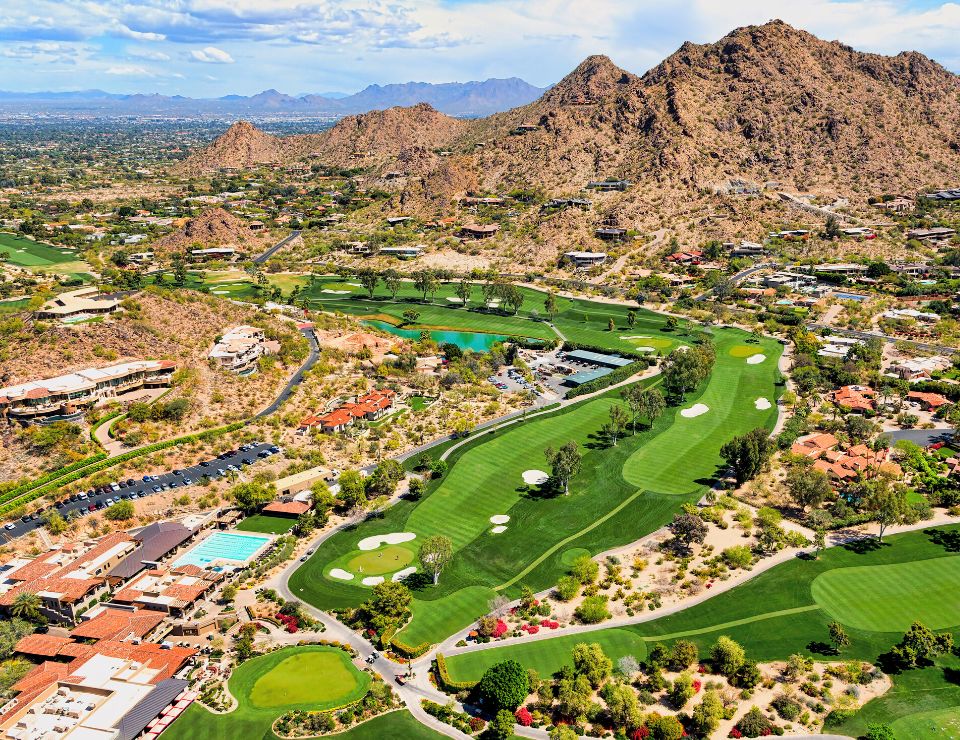 As Arizona’s wealthiest municipality, it’s no shock that Paradise Valley is one of the safest places to live in Phoenix. Golf courses, dining and shopping amenities, and eight full service resorts grace Paradise Valley, cultivating a little Beverly Hills of the desert.

In 2018, Paradise Valley reported just three violent crimes, giving it one of the lowest crime rates in the state. And it’s right on par with the national average crime rates.

This part of Phoenix was originally farm land, the name Paradise Valley being coined by cattle ranchers driving their stock through the area. Today, the land looks much the same, and the homes often enjoy large lots with more land than you would find further into the city. Plus it offers so much for residents and locals to do! There are paths for hiking, horseback riding, and bicylcying, and if you’d prefer the indoor lifestyle you can enjoy the shopping that Paradise Valley offers too.

Popular with retirees, Paradise Valley is as quiet as it is upscale, so leave the partying for another part of town. 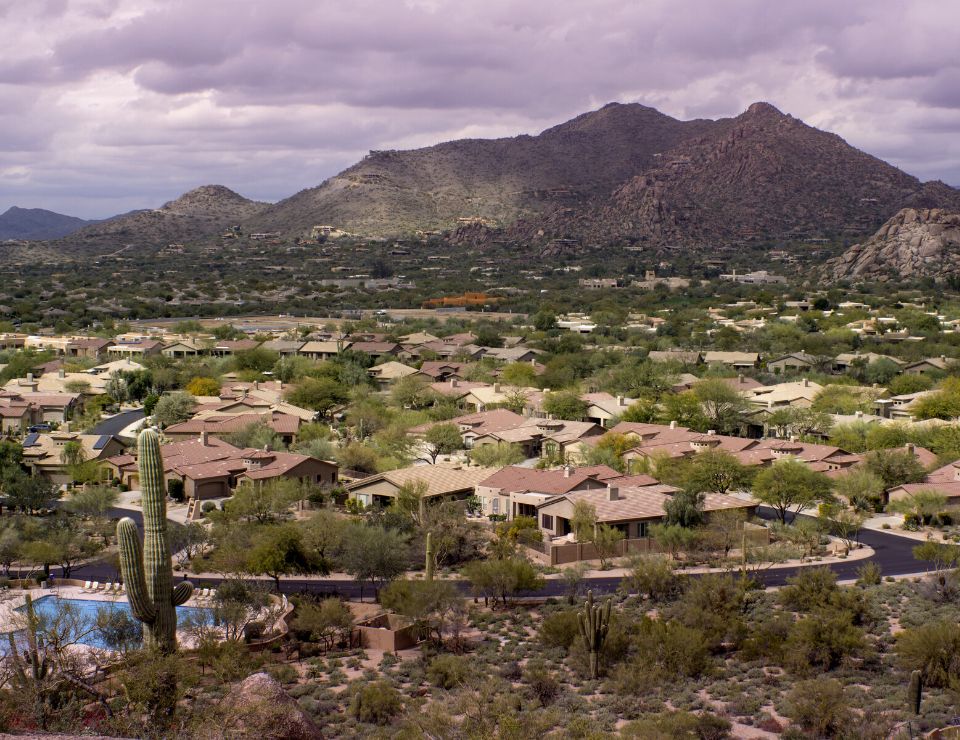 Bordering the southeastern end of the Phoenix area, this neighborhood finishes our list, but perhaps saves the best for last! Charming Spanish architecture makes Ahwatukee Foothills an aesthetic and desirable part of town. This Phoenix neighborhood was developed in the 1970’s and was originally designed to be a retirement community, likely due to its quiet and serene natural surroundings. This community includes master planned neighborhoods that have built around man made lakes and golf courses (truly a retirees dream!).

Ahwatukee Foothills lies just outside the South Mountain Park and Preserve, providing not only plenty of adventures for the outdoor enthusiast, but beautiful views for those wanting to enjoy from the comfort of their homes.

With a laid back western atmosphere, but plenty of urban sprawl, residents of Ahwatukee Foothills consider the area to be both people and dog friendly, and the perfect place to raise a family.

With a crime rate 57% lower than Phoenix, and 28% below the national average, it’s clear why Ahwatukee Foothills is a perfect family choice to call home.

Learn More: 10 Things you NEED to know before moving to Phoenix, Arizona

Looking to move to Phoenix & need a place to stay?

If any of the above neighborhoods sound like the ideal place you want to buy a home Phoenix, but you don’t live locally I always recommend visiting and staying in the area to be able to experience it for yourself. Check out these hotel deals in the Phoenix area & let me know if you’re coming to town so I can assist you with your home search

Areas of Phoenix With the Highest Crime Rates:

We’ve touched on plenty of the safe areas around Phoenix, but you might still be wondering if there are areas to be avoided? Let’s preface by saying absolutely not.

Areas with higher crime rates still have so much to offer, and are often hotbeds of culture and activity. Remember our first rule of crime rate; higher populations will always mean slightly higher crime, as there’s just more people!

With that disclaimer in mind, statistically; the areas of Phoenix with the highest crime rate are: Alhambra, Encanto, and Central City (including Downtown Phoenix).  While you’ll find plenty of personal opinions claiming that Downtown Phoenix is unsafe, this vibrant area still shouldn’t be checked off your list of places to at least visit if you live in Phoenix. With a plethora of dining and entertainment, the Chase Baseball field, The Arizona Science Center and the Children’s Museum of Phoenix, there’s more history, art, sports, and culture packed into this one area than perhaps the entirety of the Phoenix metro area! 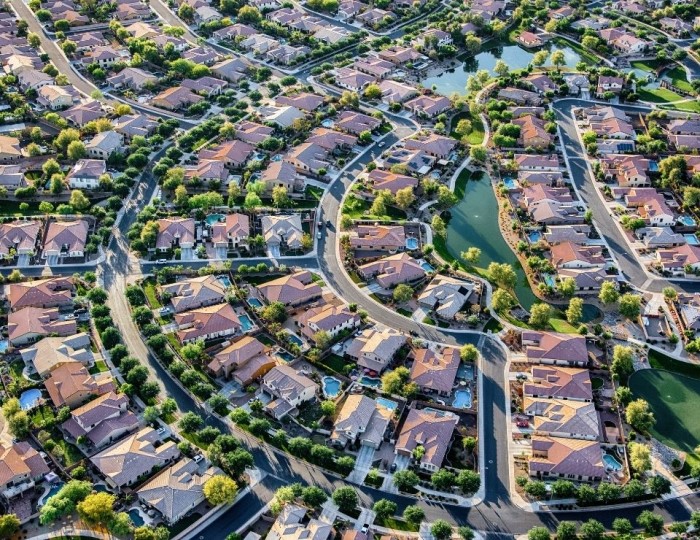 If you want to live close to these amenities, you absolutely can; it just might require a different awareness. For a city dweller these instincts may come second nature, such as securely locking your home when you leave, making sure windows are secured well, and closing curtains when you’re away so you aren’t advertising a vacant home. Many people install security cameras as well, to keep an eye on things when they are away.

Downtown Phoenix is extremely walkable, so if you’re going to be walking home from a baseball game or dinner late at night, be aware of your surroundings, and catch an Uber if you are alone. Don’t leave valuables clearly visible in a car parked on the street, asking for your car window to be broken. These are all just good practices if you choose to live in areas with a higher crime rate.

City living, just like suburban living, or rural living, comes with its own set of perks and drawbacks. Once you decide on the lifestyle that’s perfect for you and your family, the rest will fall into place.

Thinking of moving to the Phoenix Metro Area?

With so many beautiful, affordable, and safe options in the Phoenix Metro Area, you might be ready to pack up and head out in search of your new home! Reach out to us at AZ LiveStyle Group when you’re ready, I’d love to help you find the perfect neighborhood for you, and within it, the home that’s just been waiting for you!

← Should you rent or buy a home in Phoenix Arizona?  Luxury Community Neighborhoods in Mesa, Arizona → 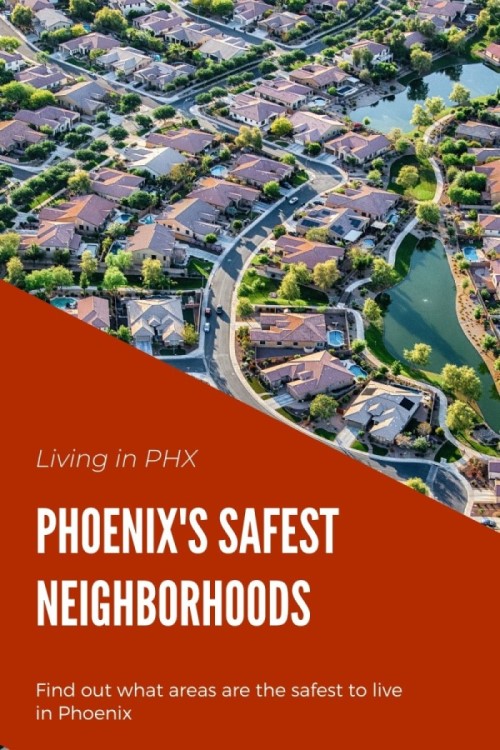 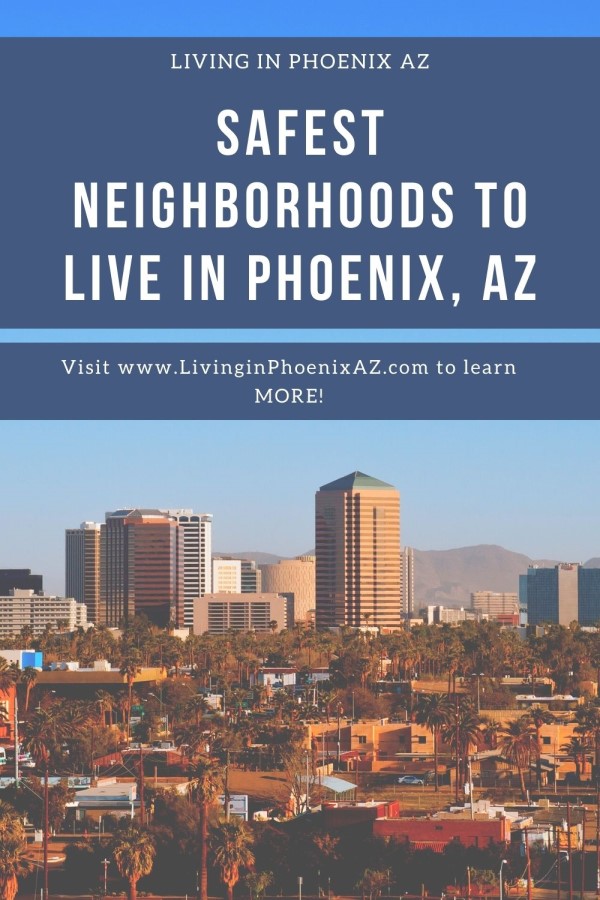 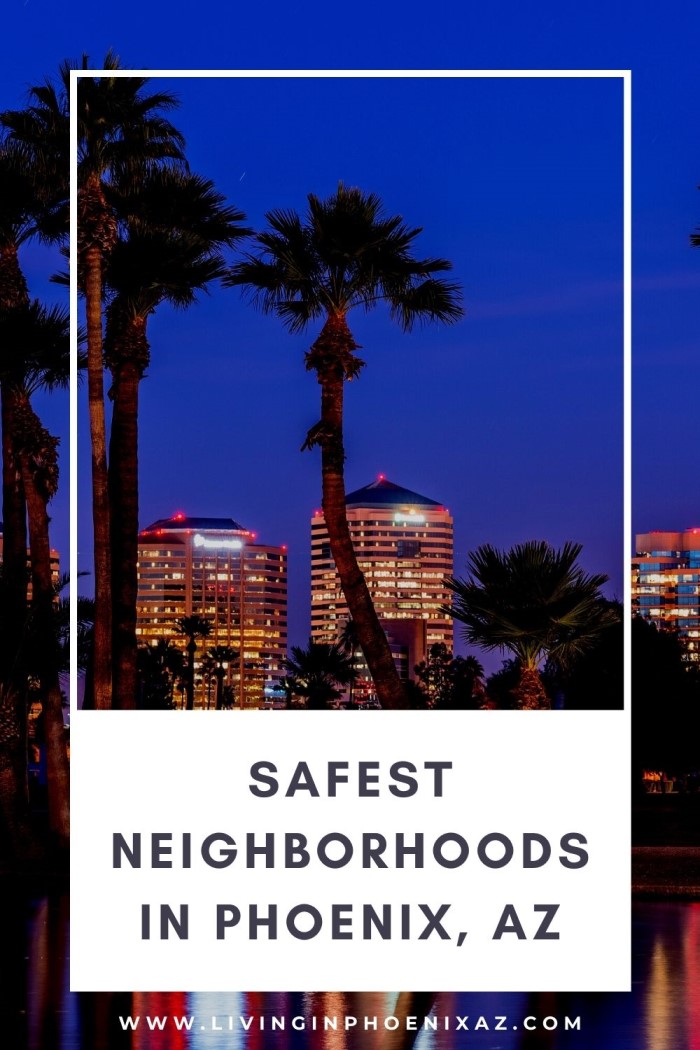 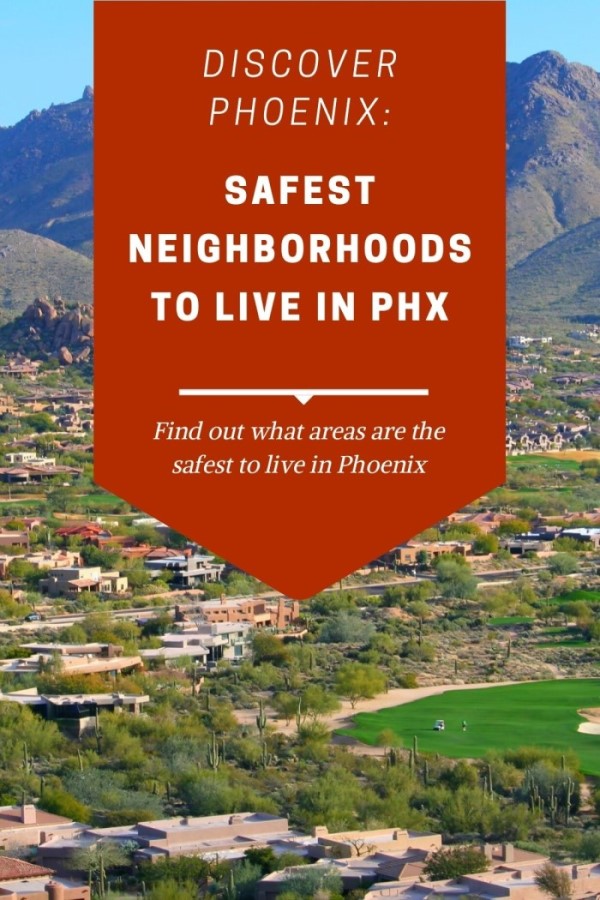