Reasons why everyone is moving from California to Phoenix, Arizona

Over the past half decade, families have been moving from California to Phoenix, AZ, at a shocking rate. In 2018, this particular move was the second most popular move in the United States. But for those looking to leave The Golden State, the options are endless. There are 49 other states they could head to, so what is coercing them to move to Arizona from California?

Let’s take a look at five of the top reasons people are trading in their surfboards for saguaros!

Five Reasons Why Everyone is Moving from California to Phoenix, Arizona

First and foremost, California has the second highest cost of living by state, only behind Hawaii, which thrives primarily on the tourism industry. The cost of living in California is just exorbitant. From insurance, to healthcare expenses, to gas prices, all the way down to more expensive drinks in the bars, everywhere you look, Californians pay more than the average American. As these expenses add up, they can be particularly frustrating to residents because the cost benefit analysis of these items doesn’t change per location.

For example, a beachfront home on the California coast should cost more than the exact same home in a residential area of Oklahoma. You are getting much more with the former. But you aren’t getting more with the gas, groceries, home utilities, or vehicles you buy in California, these things are the same everywhere you go. You are just paying more for them there because of where you are buying them.

The affordable cost of living has long been a draw to the Phoenix area. The public schools are exceptional, so parents don’t have to invest in pricy private schools to ensure a good education for their children. Groceries and dining out are reasonably priced in Phoenix. Homes are more attainable to the general public, and your dollar goes much further in regards to the size and quality of the homes you can buy in Phoenix compared to those in California.

On average, the California cost of living is about 30% higher than it is in Phoenix. At the end of the day, wouldn’t you like to have 30% of your money back that you would have spent to have the exact same thing somewhere else? 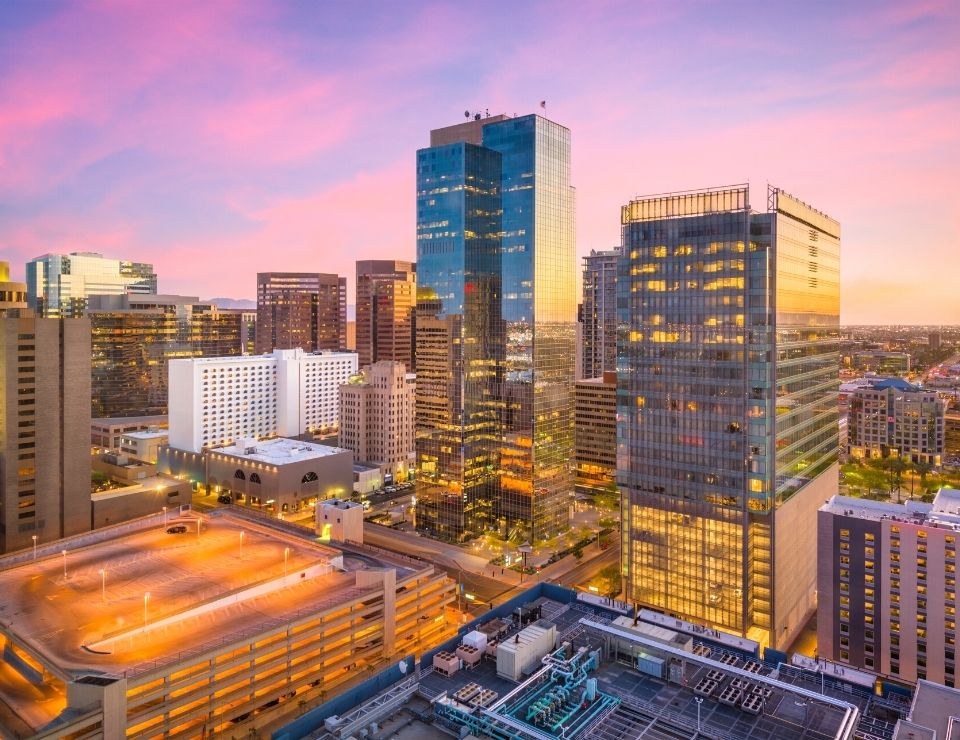 Learn More: What is the cost of living in Phoenix, Arizona?

2. Housing Prices in Phoenix vs California:

Unlike renting a home (in which you are losing money constantly) buying a home is an investment. Unfortunately, this is an investment that’s simply inaccessible for many people living in California. Though homes are more expensive in the large cities like Los Angeles, this is also where most of the population of this colossal state lives. Affordable homes in places like Bakersfield, CA, mean little for those who must live and work in the big cities. The median home price in Los Angeles is about $650,000, and many homes easily push a million. These aren’t big homes, either. With such prohibitive price tags, many Californians pay rent their entire lives, losing much of their paycheck perpetually.

In many neighborhoods in Phoenix, for $300,000 you can get a three bedroom, two bath home with a nice garage and relatively spacious yard. You’ll likely have ample storage as well, something that proves to be a constant issue for Californians. If your budget is lower than this, there are still plenty of great options for smaller or older homes that might fit your budget in Phoenix, but you will struggle to find that in California, where even the old and small houses price out most people. 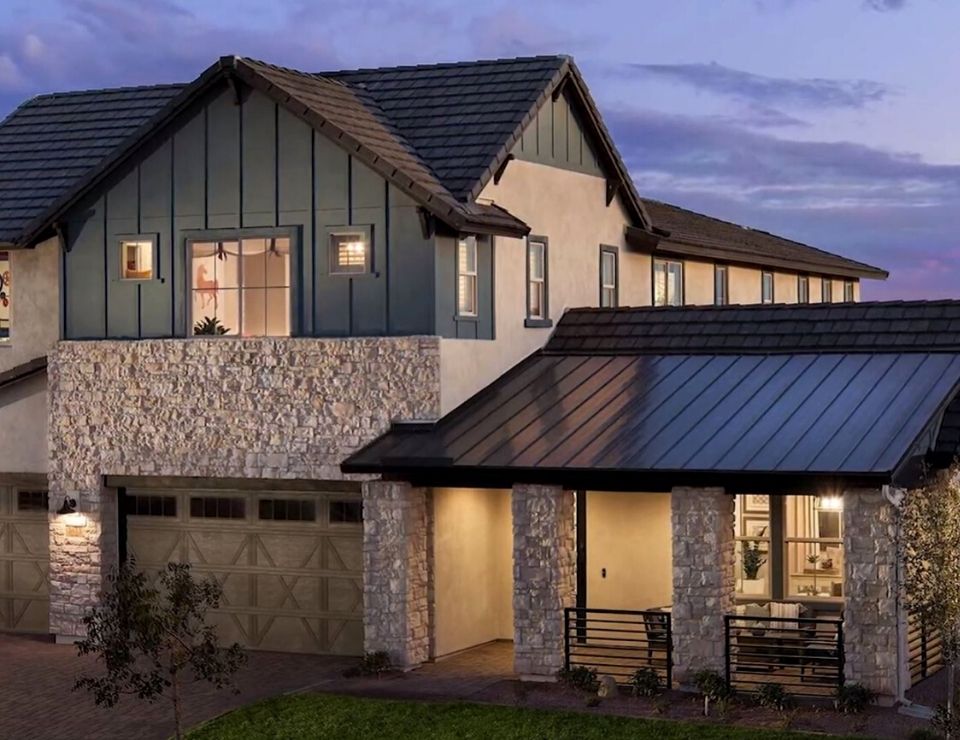 As any California local will tell you, “The weather is great, and the traffic is terrible, and neither will ever change.” The latter of this old adage actually might, though; because traffic is getting worse in California, if that is even possible. The roads are of course less congested outside of the city, but the average Angelino spends 120 hours in the car each year, or five days. To put that in perspective, five days is also the average American vacation length. Other big cities in California, such as San Diego and San Francisco, might not be quite as high, but it’s so close we can call it comparable.

If you happen to be a member of the increasing “work from home” workforce, don’t think the traffic in California won’t affect you. It seeps into all facets of your life. Californians simply cannot get out of town on a Friday after work unless they leave no later than 2:00 p.m. If you need to get to a doctor’s appointment during morning rush hour, you better leave early and just sit in your car in the parking lot. The traffic hinders everyone, not to mention the smog pollution is affecting the entire state, even those who don’t contribute to it.

Traffic in Phoenix is by no means perfect, and Phoenicians will tell you it’s getting worse, and that everyone needs to stop moving here and clogging up our roads! But it’s still comparatively better, and residents don’t have to sacrifice city life for lesser cars on the road. True, there is far less traffic in the middle of Wisconsin, but many would consider that not exactly a fair trade.

You’ll still see peaks in congestion, like rush hour and holiday weekends, but for the most part you can get from one end of the Phoenix Metro Area to the other in around an hour. Phoenix has also done an excellent job of creating aesthetic highway and overpass infrastructure, inspired by local history and art. It’s generally kept clean as well. So even if you’re sitting in some traffic, you have pretty things to look at!

Phoenix has some of the best schools in the state, and their consistently high ratings only get better each year. Each suburb has plenty of wonderful school options for public or private education. Among these great schools, you’ll find a number of Blue Ribbon Schools.

“The National Blue Ribbon Schools Program was established in the early 1980’s, and strives to recognize and reward schools that exemplify the makings of an exceptional, well rounded education. The Chandler Unified School District and the Scottsdale Unified School District are some of the top rated school systems within the Phoenix area, but they surpass others by only a small margin.

If you are moving to Arizona and have Googled the education systems in the state, you might be alarmed to find the state average to be very low. If you are moving to Phoenix specifically, don’t let this concern you at all. Arizona is a relatively big state, and much of it is rather unpopulated. In these more remote areas, the school systems do not benefit from things like a plethora of tax dollars from a large city population; access to enrichment options like field trips to museums or historical sites, and a variety of other factors. In the Phoenix area, education is taken very seriously, and the city prides itself on great schools, great sports and arts, and a high graduation rate. 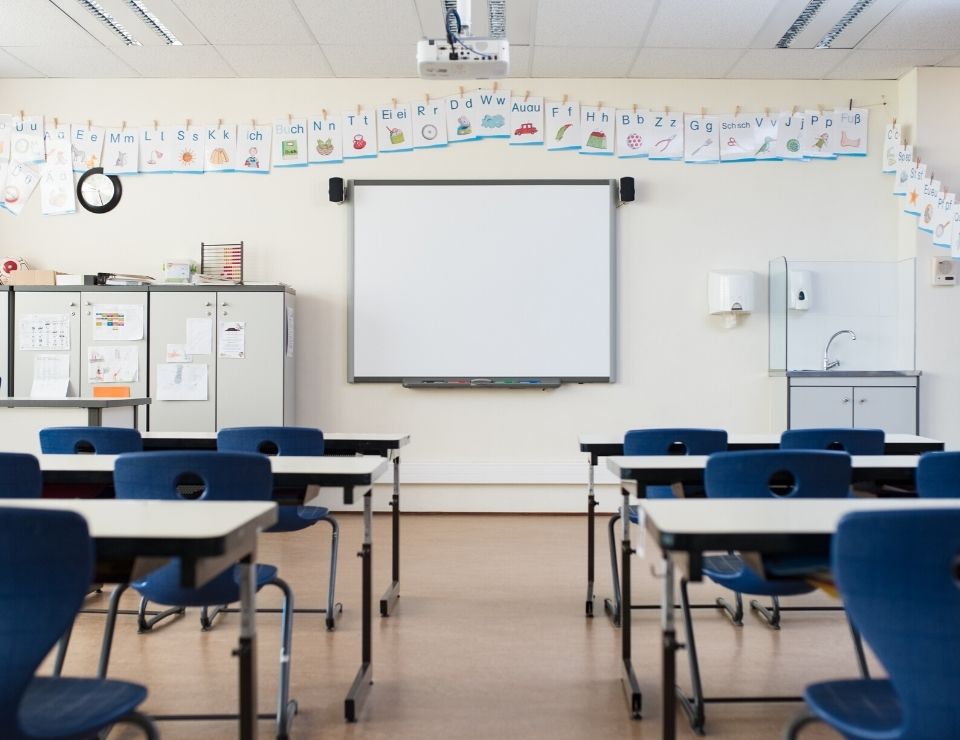 Learn More: What are the best school districts in Phoenix?

California is stunning, there are no if’s, and’s, or but’s about it. It is the only state in the U.S. to have two expansive deserts, both rocky cliff and beach-break beaches, a mountain range that is home to the tallest mountain in the lower 48, and forests that are home to some of the oldest trees standing on the country, most of whom are older than the United States itself. But all of this majesty comes at a price, one that many Californians cannot keep up with. Especially when there is beauty elsewhere, for a fraction of this price.

The landscape in Arizona is different than that of California, and it can’t really be considered a comparison. More so, both areas can be admired and respected for their strengths and differences. 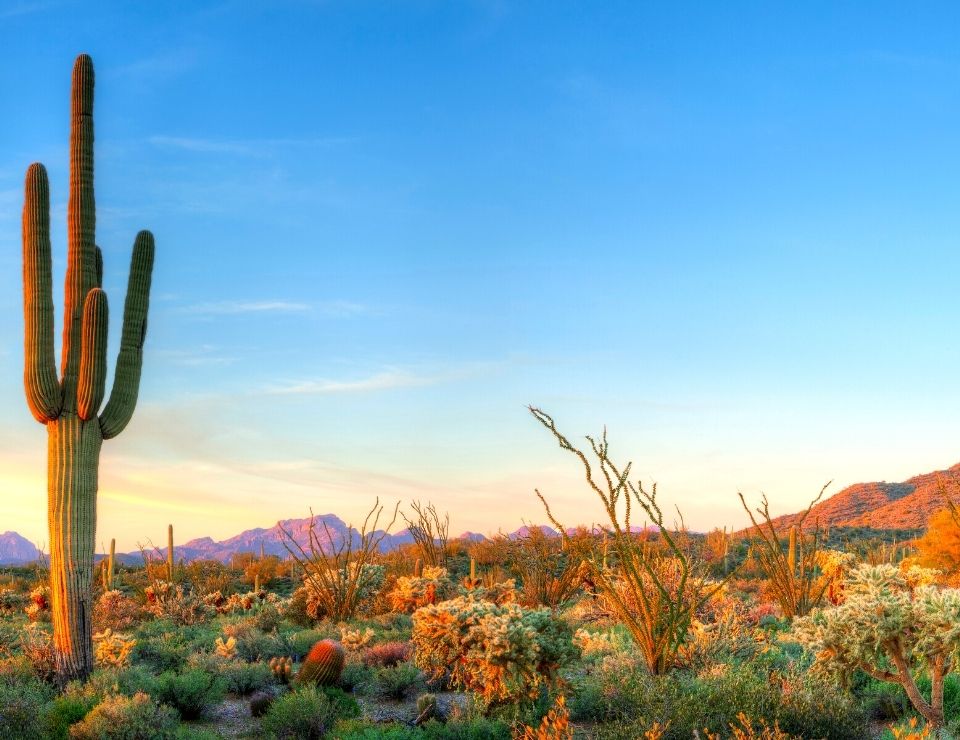 For Californians relocating to Phoenix, it can be hard to leave the beaches and mountains. But the desert has much to offer as well. From the austere beauty of wide open and lonesome spaces, to buttes doused in brilliantly saturated hues, to sparkling blue oases like Lake Powell, there is a whole new world of the beautiful outdoors for transplants to explore and fall in love with.

If you are willing to drive a little further from the city, you can find even more interesting and different landscapes. You can even find snow and mountains, for the California skier who fears they just cannot be ripped from the sprawling Sierra. With year round temperate weather, California transplants will enjoy taking advantage of all the hiking, golfing, boating, camping, and plenty more that Arizona locals enjoy 24/7/365!

Thinking of Moving from California to Phoenix, Arizona?

Are you a California resident considering packing up and heading east to The Grand Canyon State? Reach out to me at AZ LiveStyles, I would love to help you find your new home in the Phoenix Metro Area! 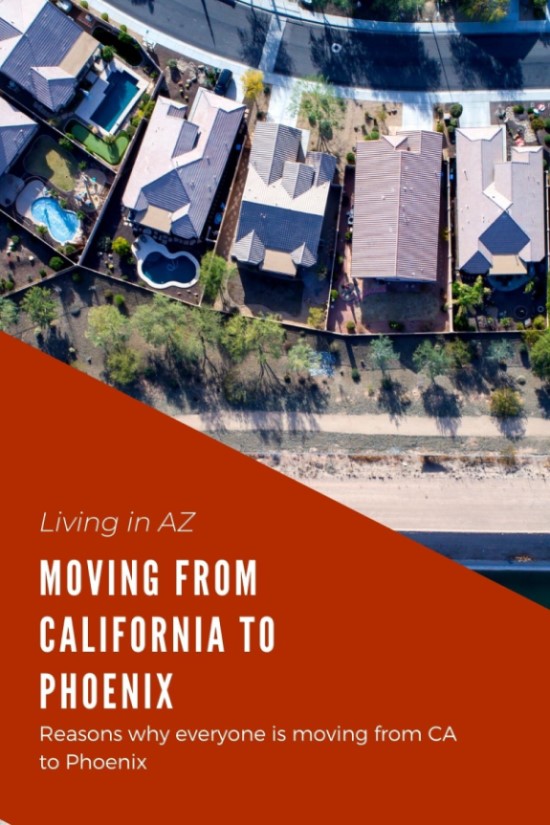 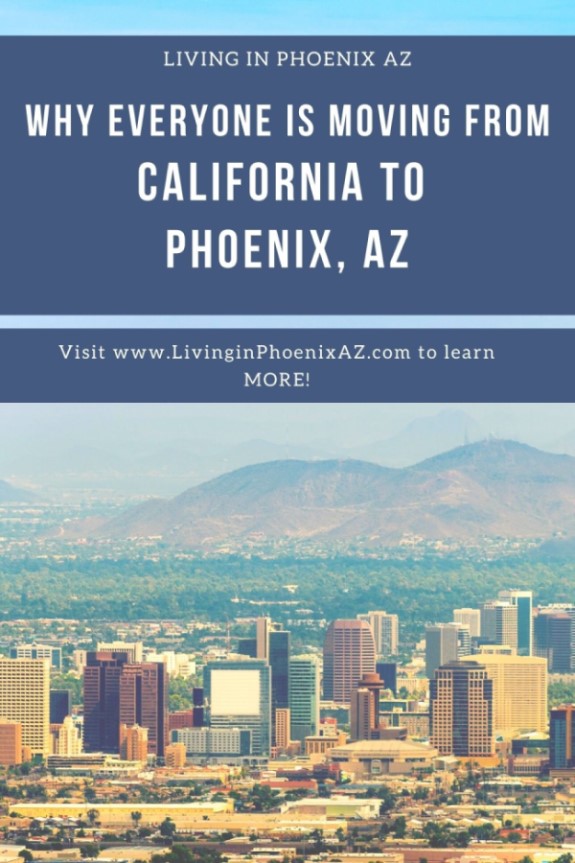 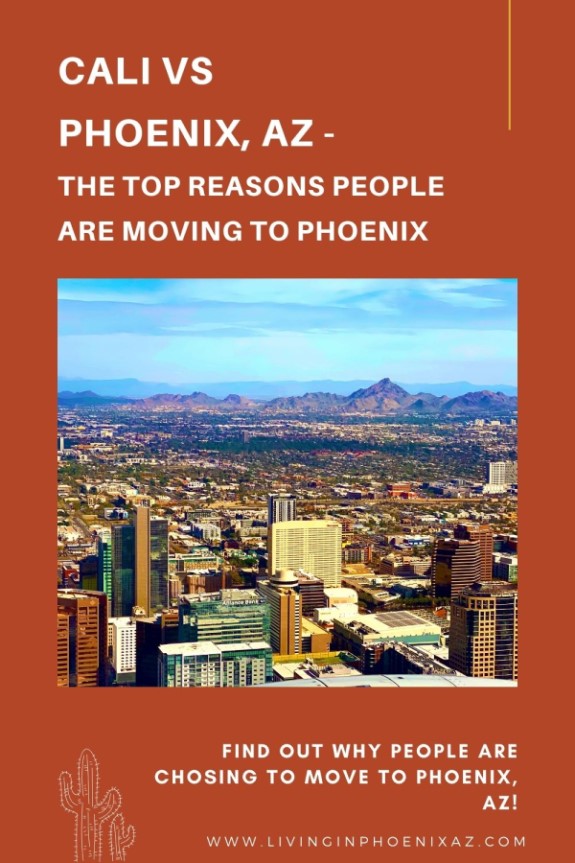 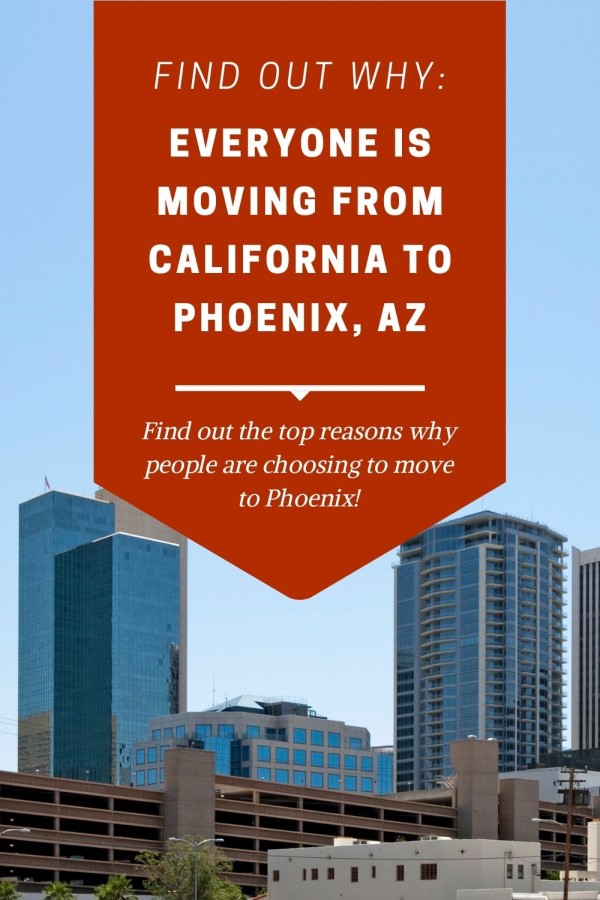