Myths of living in Phoenix

There are a few established perceptions about living in Phoenix, and if you’ve ever heard anyone even mention the city, you probably know them.

“There’s no traffic, but it’s growing and getting worse.”

“Homes are affordable, but all the millennials have moved there and now it’s expensive.”

The list goes on, but it’s rather contradictory, and you can’t believe everything you hear. To set the record straight, let’s look at some of the facts and bust some of the myths of living in Phoenix. You might find things aren’t always what they seem in The Valley of the Sun!

Phoenix is in the middle of the Sonoran Desert, so yes; it does get quite hot. But it also cools down considerably every night, even in the summer. The desert actually gets very cold in the night, dipping down past freezing in the wintertime. This means that even on the hottest days, once the sun sets you can open the doors and windows and let the breeze in. During the hottest part of the summer, there are plenty of days over 100 degrees, so the lifestyle here does take a little bit of planning.

For instance, you shouldn’t do your yard work at 1:00 pm in July, but you could probably get out there pretty comfortably at around 6:00pm. The greatest upside to the warm climate is the incredibly comfortable winters in Phoenix. This cool, 60 degree average is the perfect weather for hiking and exploring the beautiful landscape in Phoenix and the surrounding areas. Plus, it’s pool season all year round, who doesn’t like that?! 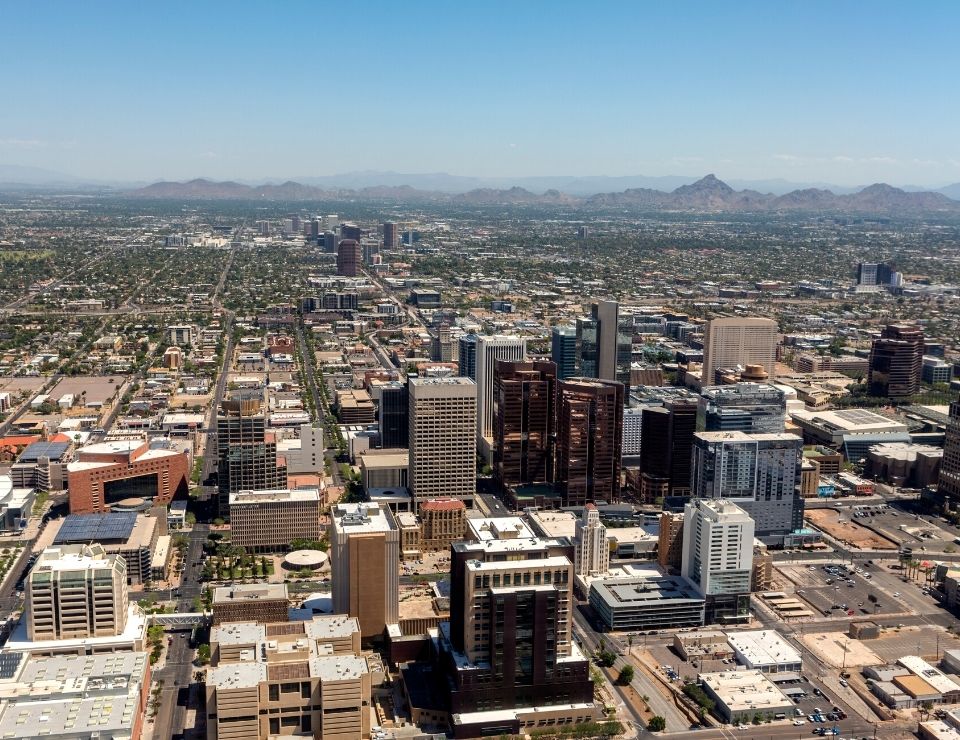 Phoenix AZ Myth # 2: There are no seasons

Parts of this notion are true, but it’s not as bad as it may seem. It’s true that you won’t see the leaves change in the fall, or wake up to a blanket of fresh fallen snow on Christmas morning, but there is still seasonal change. Like we mentioned above, the winter cools down significantly. You will feel the seasons change, and you’ll absolutely need at least a light coat or jacket when it cools down, so don’t give all your winter gear away before packing up and heading west!

Though the seasons do change in the southwest, one thing to note is that they don’t exactly follow the Gregorian calendar in the way you might imagine. The fall in Phoenix comes a bit later, almost around Christmas time. While much of the country is experiencing a very chilly Thanksgiving, it’s still very likely to be hot in Phoenix. As long as you don’t break out your turtlenecks on October first, you should be fine. 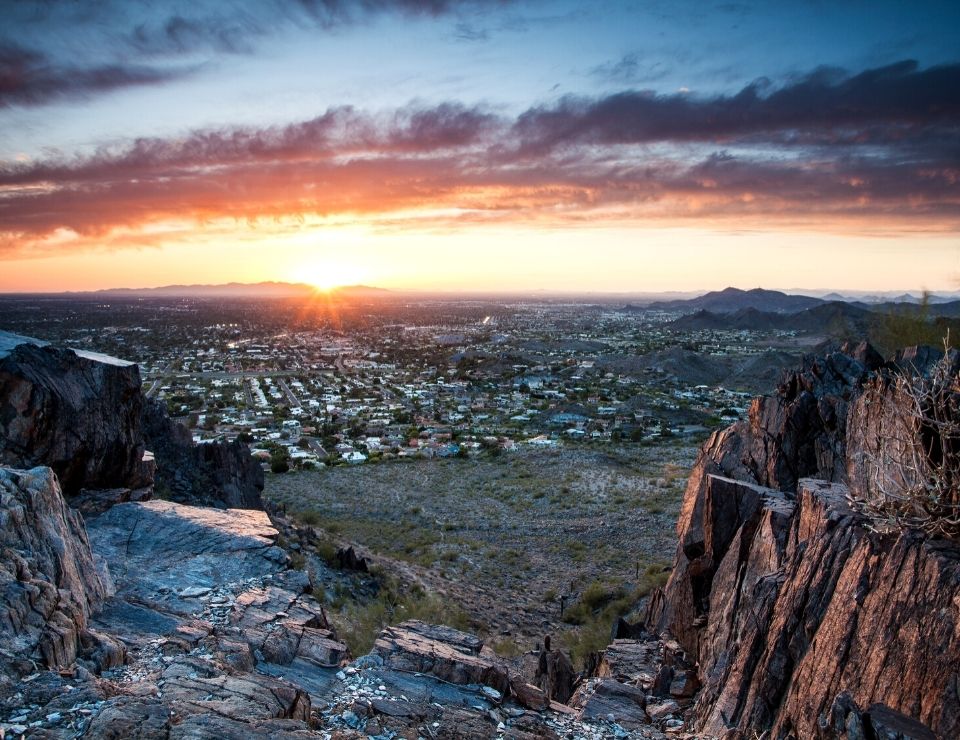 Learn More: 10 Things to know about living in Phoenix, Arizona

Phoenix AZ Myth #3: The locals are all senior citizens

Phoenix has been a snowbird destination for a long time, there’s no denying that. But it’s also one of the biggest destinations in the country for Millennials and Gen Z transplants. Different parts of town attract different demographics, just like any metropolis. Retirement areas are replete with senior citizens. But places like Tempe, where Arizona State University is located; are full of young people.

Also worth noting is that many of the older people in Phoenix are not there because they are elderly, they just came to Phoenix a long time ago and never left. A drive around town will show there is a lot of midcentury architecture in the area. Phoenix experienced a housing boom in the 50s, 60s, and 70s, and many of the people who came to Phoenix and moved into those homes never left. Think about it, if you lived in the perfect place to retire, would you move anywhere else? Especially if your whole family was settled in the area? Probably not! Find the neighborhood that best suits you and don’t worry too much about the age of everyone else in the city.

Phoenix AZ  Myth #4: You will spend a fortune on your electric bill

You will have to pay a relatively high electric or gas bill at some point in the year no matter where you live. If you live in the mountains, the gas bill to keep your house warm can get pretty pricey. If you live in the desert, the electric bill to keep the home cool is going to get steep as well. And for everyone in between, you are still using your AC and heat throughout the year so it’s probably evening out at the end of the day.

The cost of running your air conditioner all summer in Phoenix will definitely cause your electric bill to go up during the hottest months, but the lack of wattage pulled in the winter will help counter that expense. There are also investments you can make into your home to boost efficiency, such as using solar panels to capture the power of that radiant desert sun and put it to work for you!

Animals and bugs are absolutely everywhere. The Midwest is infested with Brown Recluse spiders. The southeast has a large population of rattlesnakes and cottonmouths. On both coasts you’ll find black bears wandering into neighborhoods like giant, clawed possums, tipping over dumpsters to root around for a snack. All of these animals could harm you in a way that’s potentially lethal, but they likely won’t. The same is true for Phoenix.

While it might have a greater concentration of venomous critters, like scorpions, rattlesnakes, spiders, and coyotes, none of these creatures are busy trying to pick the lock on your front door and come crawl into your bed. You will see them from time to time, but that’s usually in their own habitat. If you are hiking, or are out for a stroll at night (the time when crepuscular coyotes are hunting for dinner,) your likelihood of seeing them is greater. Just give them space, they were here first.

*You might have heard the opposite statement as well; that you will never have a bug problem in Phoenix because it is too hot and dry for them to thrive. This isn’t true either. But one of the good things about the particular selection of insects you’ll find in Phoenix is that bugs that require significant amounts of water, especially standing water; can’t thrive here. This means there are far fewer mosquitoes in the desert, and if you come from an area infested with them, you will quickly notice their absence!

Phoenix AZ Myth #6: It’s easy to buy a big home and a lot of land in Phoenix

While this statement might have been true decades ago, it certainly isn’t the case anymore. Phoenix is one of the fastest growing cities in America, and it wasn’t even a small town to begin with. Though housing prices here are more affordable than they are in comparable cities like Los Angeles, it still isn’t cheap. You can get a nice home here with a yard and maybe even a pool for a decent price, but don’t expect to be buying the ranch anytime soon, unless you can foot the exorbitant price tag.

The areas of town in which you can buy larger plots of land are on the outskirts of the metro area, and these areas are even more expensive than lots in the rest of the city. There’s a reason all these mansions out in the desert are dotted around few and far between…the residents like their privacy, and they can afford to have it! 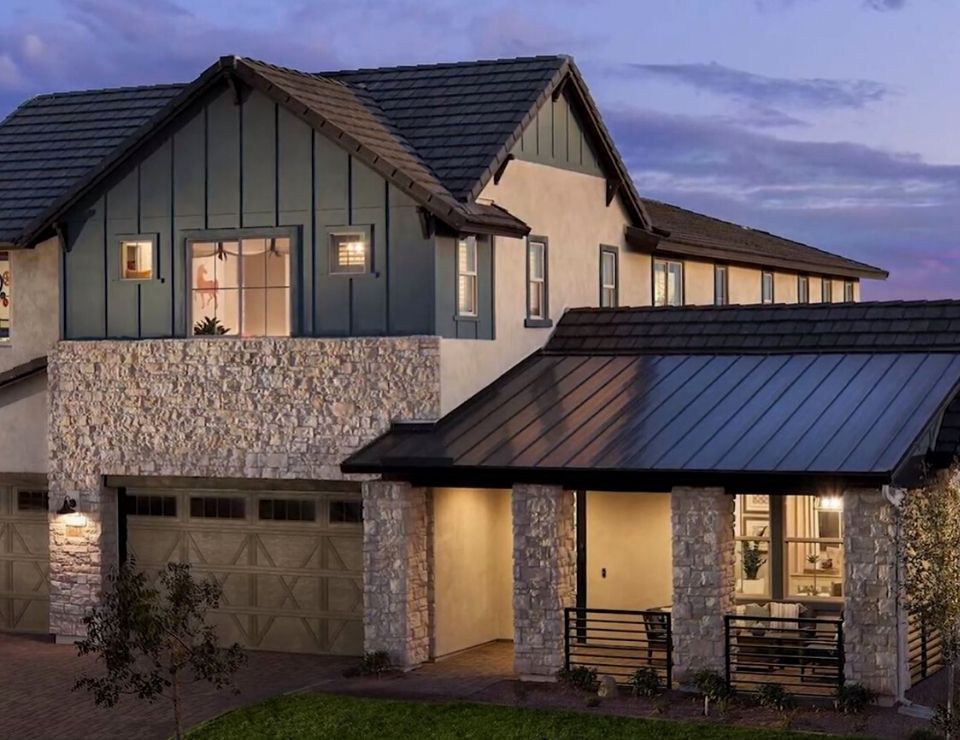 Phoenix AZ Myth #7: There isn’t enough water for everyone

This myth has been blown out of proportion for decades, and perhaps only still exists because it’s managed to hang around for so long. There is plenty of water in the Phoenix Metro Area. The area is not in a drought, and the people aren’t going to be out of water in ten years or less.

Statistically, Phoenix is actually one of the wettest desert cities in America, with an average rainfall of about 8 inches a year.  Phoenix only exists because of the “excess” of water it procures. When Phoenix was first being settled, the amount of rainfall, coupled with the weather that would push down through the rolling hills of the Sonoran Desert onto the town made it an oasis in the desert. As people have since the dawn of time, they figured out there was water in this area, and decided it would be the best place to settle down and build a town. Mother Nature has done just fine ensuring there is water in the desert, and the plants and animals have all adapted to use it conservatively, something humans can always take a lesson from.

Now that we’ve busted some of these long standing myths about living in Phoenix, let’s talk turkey! If you’re considering moving to the Phoenix Metro Area, reach out to me today. I love helping people find their dream home in the Valley of the Sun!

← Where to live in Scottsdale, Arizona Reasons why everyone is moving from California to Phoenix, Arizona → 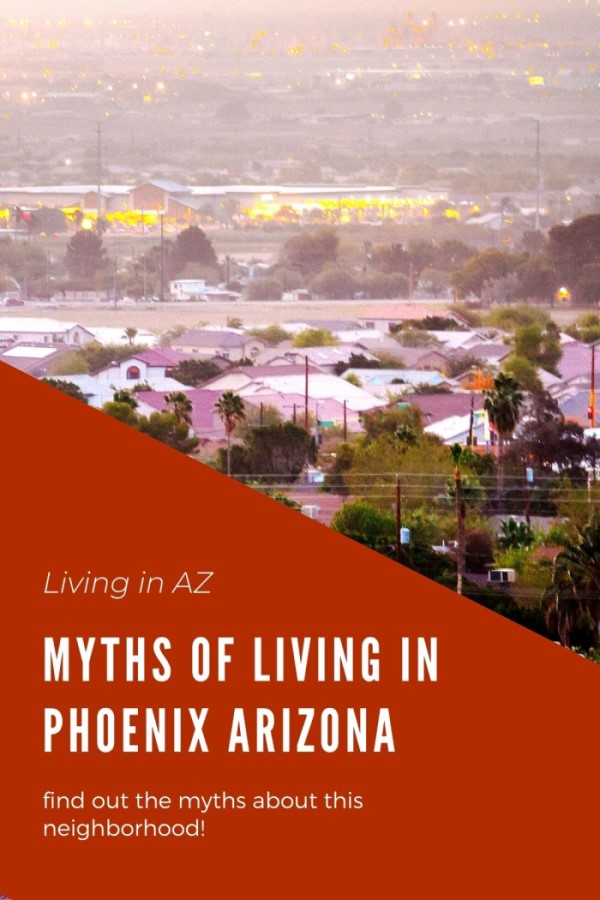 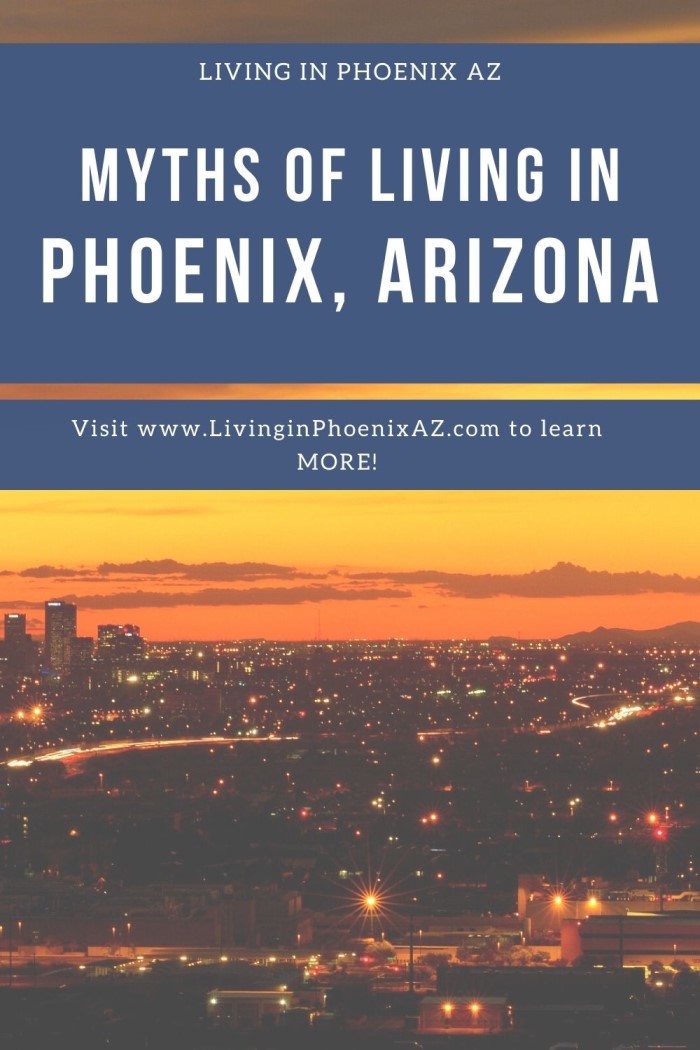 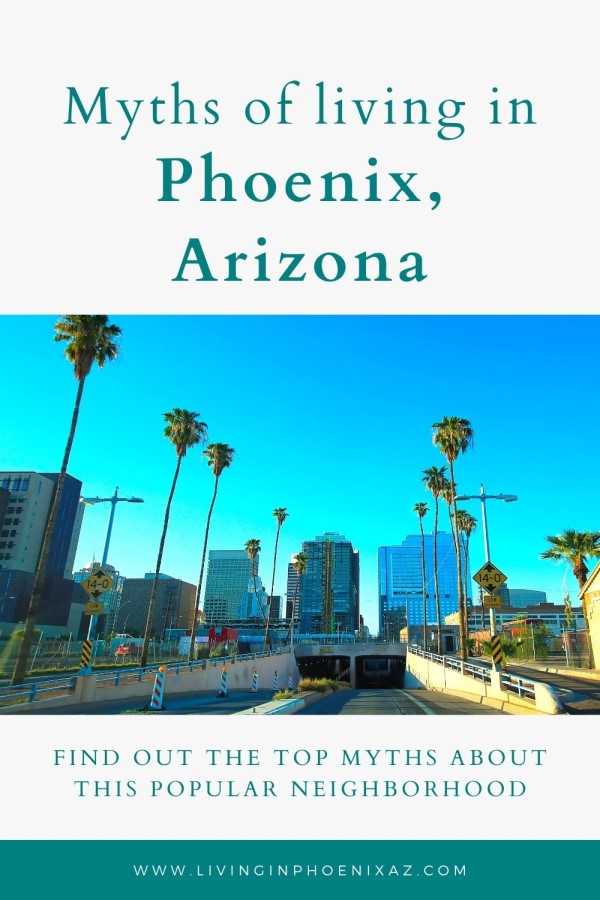 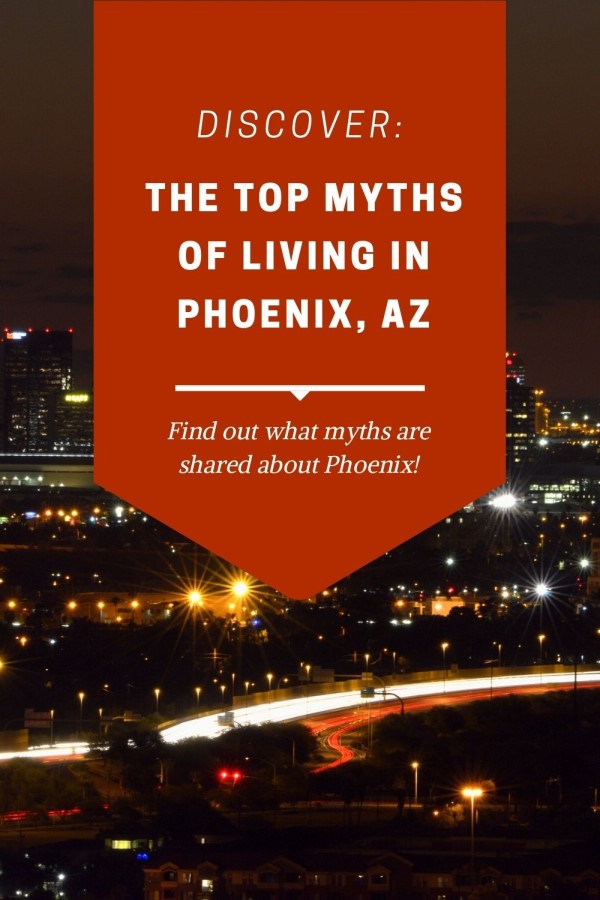