Living in Phoenix vs Living in Denver

Phoenix and Denver are two of the most popular, fast-growing areas in the United States. It’s no surprise that people are moving to Arizona or Colorado with all that these beautiful states have to offer. Pro sports, entertainment, and the great outdoors make both of these places prime real estate, so let’s check out some of the comparisons of moving to Phoenix vs Denver.

Living in Phoenix vs Living in Denver

Lifestyle differences between these two cities:

These two cities, with millions of residents each, have the best of both worlds: the amenities of living near or in a metropolis, with the respite and opportunity of wide-open spaces just around the corner. Undoubtedly, the lifestyle of any given area has a profound effect on the desirability of living there. One thing both Phoenix and Denver have in common is a healthy and active lifestyle. Few people move to either of these areas that hate being in the outdoors. With hiking, skiing, biking, boating, fishing, and more, there is so much to do in Phoenix and Denver that residents can stay busy year-round.

What you like to do in the great outdoors may determine which place is a better fit for you, however. If you are a snow sports enthusiast, you won’t find as much to do in Phoenix as you will in Denver. Skiing and snowshoeing aren’t necessarily right outside of your door in Denver, but they are much, much closer than they would be in Phoenix. If you want to be able to enjoy warm weather for more of the year, Phoenix could be the place for you.

The weather for hiking, biking, and camping in Phoenix is more comfortable for a greater portion of the year, meaning though you might not get any fun in the snow, you can theoretically spend more of your time outside all year round. 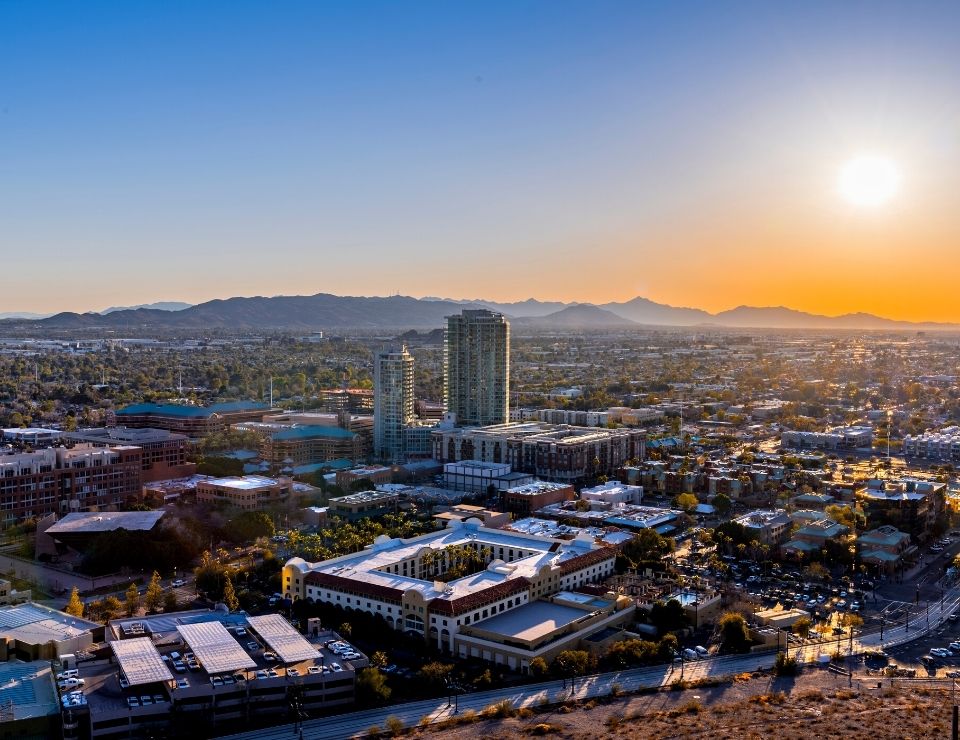 Weather in Phoenix vs Denver:

The temperate weather is no doubt one of the biggest draws to Phoenix. Many Americans wishing to escape months of snow and ice are more than welcoming of the desert heat if it means they never have to shovel a sidewalk ever again. Denver, however, has a little bit more of everything, and the weather can be very unpredictable. A very warm fall and winter could mean 70 degree days in December. There could also be snow on Halloween. It’s hard to say what the seasons will be like from year to year.

Even though both Denver and Phoenix have beautiful weather, they both present some problematic weather as well. Snow and ice storms are not uncommon in Denver. Crippling summer heat that nearly forces you indoors is commonplace during the long summers in Phoenix. These two places seem to have opposite “nice weather” schedules. Summers are lovely in Colorado and sweltering in Arizona, but winters in Arizona are temperate and mild, while in Colorado they are often full of snow and ice. 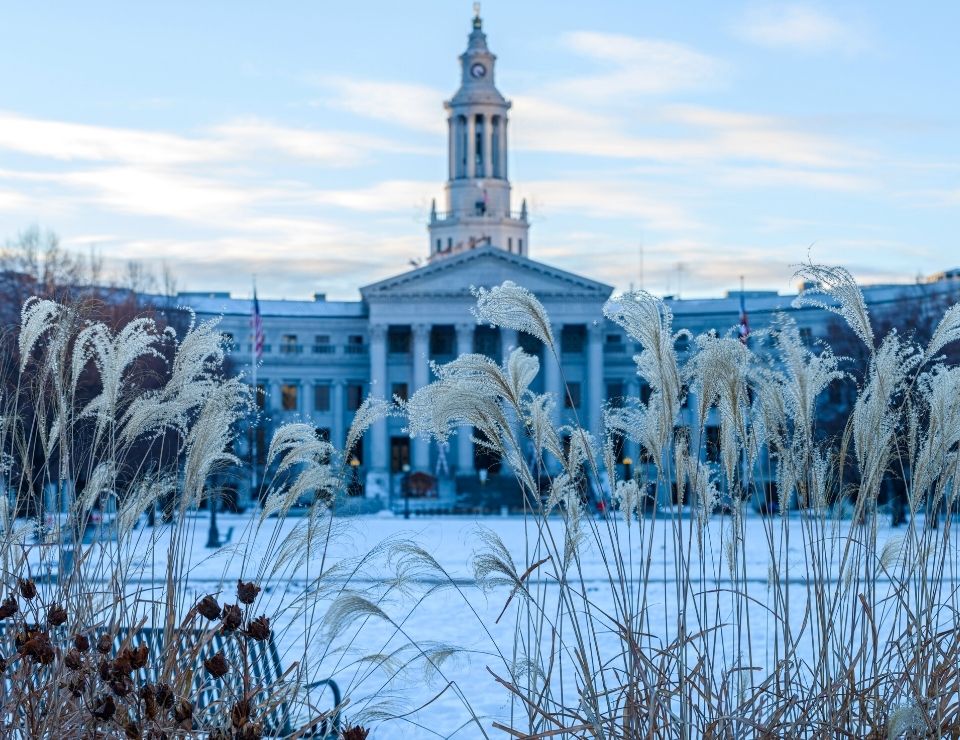 Phoenix vs Denver Holidays and Seasons:

When the barbeques have been packed away in the garage and the swimming pools all covered, many people anticipate the festive seasons to come. Bright orange pumpkins smiling on doorsteps, Christmas lights that will soon emerge from their slumber in the attic. The holidays certainly have an aura that is palpable. If you are one that waits for this time of year all year long, Denver might be a better fit for you than Phoenix.

Obviously, Denver experiences a chilly fall and snow during the winter months. Phoenix, on the other hand, sees neither. In fact, though the winter months are very comfortable, the fall can often still be very hot in Phoenix. When your pumpkins rot in the heat on your doorstep, and the Christmas lights must be strewn across cacti instead of fir trees, some people feel the holidays just aren’t the same. If you think you need the crisp changing leaves in the fall and the serenity of the falling snow, Denver will be a better place for you than Phoenix.

Cost of Living between Phoenix and Denver:

We will dive into where exactly the cost of living expenses go when you are living in Phoenix or in Denver, but most of your day-to-day expenses are comparable to the rest of the United States. Gas, dining out, and entertainment will all likely be more expensive in these cities. Groceries, medical bills, and other small expenses are usually not much more. Before you write off the “not so bad” cost of living, though, consider the cost of housing. Buying a home (or even renting) is going to be a large chunk of your cost of living, and it is only going to go up as the years go by. 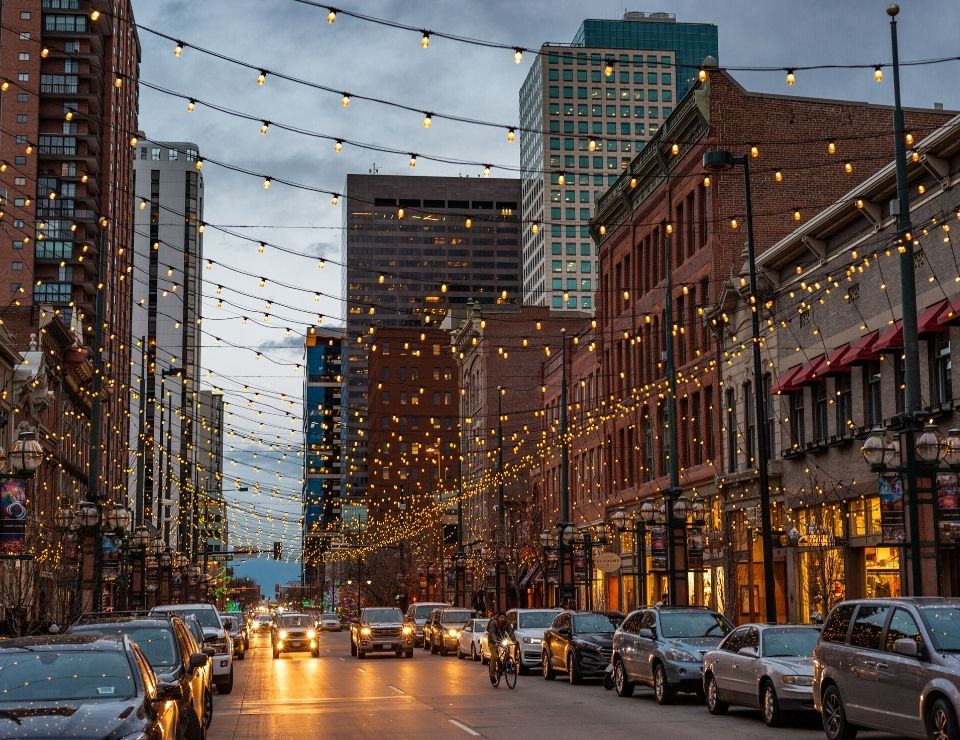 Both Denver and Phoenix have seen huge population booms in recent years. That being said, the roads and infrastructure of Phoenix seem to be more capable of supporting this growth. Phoenix is also an extremely large, spread-out metropolitan area, with plenty of room to reach out in every direction.

Both cities experience rush hour traffic and increasing traffic each year, but some highways and parts of town are worse than others. For instance, during ski season in Denver, you will almost always experience weekend traffic from Friday through Sunday as weekenders and visitors head to the front range.

Gas isn’t cheap in either state, but at least residents of Denver or Phoenix aren’t looking at gas prices of the likes of their neighbors to the west, in California. Gas prices fluctuate, and on any given day they might be more expensive in Phoenix or Denver, but for the most part they are just a little bit above the national average. When it comes to commuting and what that will cost, if you live in Phoenix, you won’t be paying for toll roads. In Denver, depending on where you are headed, these tolls could really add up quickly. 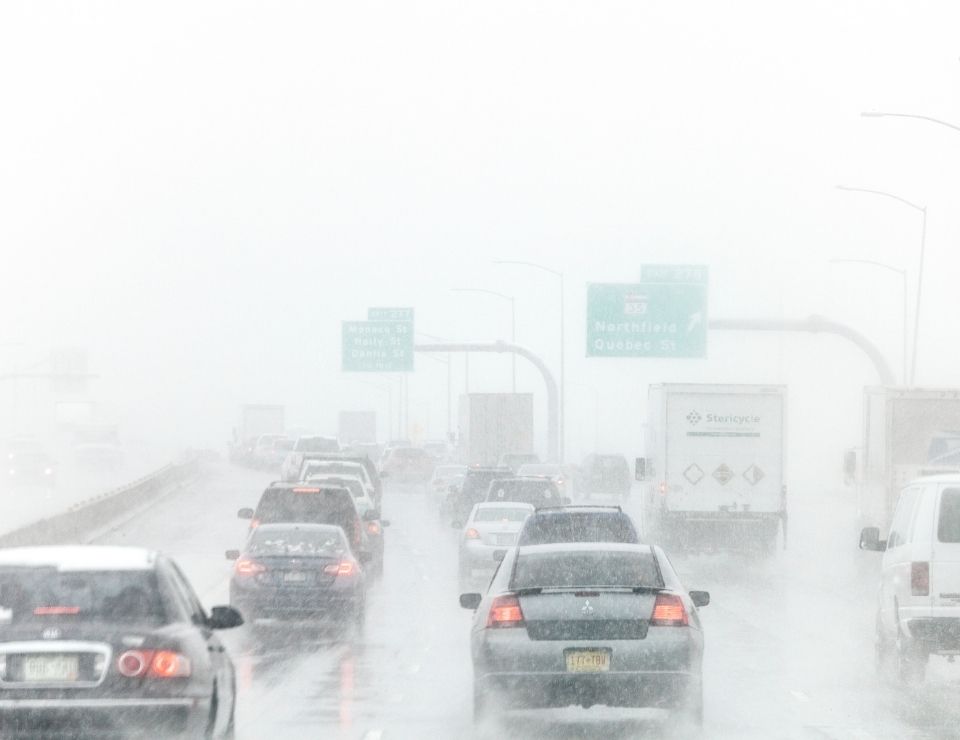 Learn More: Where to live when Moving to Phoenix, AZ

In both Denver and Phoenix, the housing is more expensive than in most cities in the U.S. This is always more true of the homes closest to amenities and in desirable living areas. While Denver and Phoenix are expensive places to buy a home, the nearby suburbs within thirty minutes or so are much more affordable. Even at its most affordable, these cities have seen such an increase in housing prices in the last two years, buying a home has become cost prohibitive to many.

In Denver, the current median sales price for a detached home is about $530,000 to $550,000. Slightly lower, this same median price in the Phoenix area is about $410,000. You could find a living situation in either city for much less, but this likely means a condo, where you will have to do some careful math to make sure you aren’t paying just as much in condo fees throughout the year as you would if you just owned the home and surrounding lot.

One thing that is prominent in both housing markets is the purchase of homes for use as short-term rentals. Renting the home as a vacation rental, or even for a few months at a time, is a very common investment strategy in both Denver and Phoenix. This is even more common in Phoenix, where so many residents are only living in Arizona for part of the year.

Colorado is home to mostly year-round residents. The rental market has snatched up so many homes that some cities are putting caps on homes that can be bought without the intent of being a primary residence. The competition for owning rental homes is driving home prices too high for many to even afford a home to live in, let alone an extra one to rent out to strangers on a short-term basis. 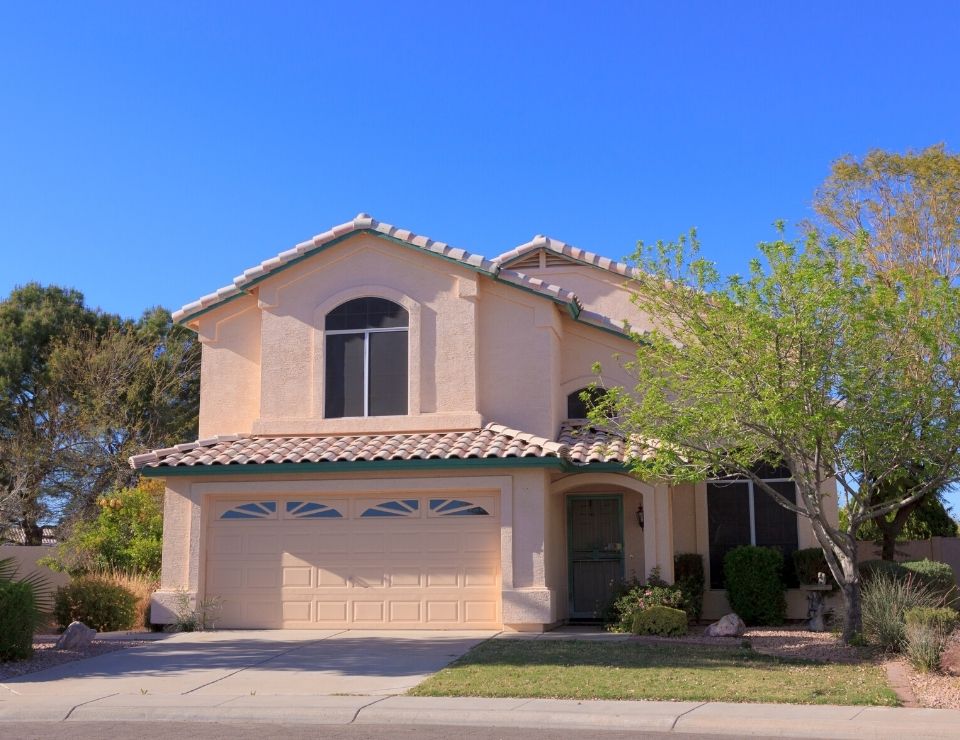 What to consider before making the move to Phoenix or Denver:

When it comes to comparing these two cities, there isn’t a wrong choice. Both are beautiful places to call home. One of the most important things to consider when moving to either is your sustainability in either location. Both cities have so much to offer, they are only going to keep growing. This means the cost of living is only going to keep going up as the years go by. If you are relocating from either coast with outrageous living expenses and housing prices, you might already find these cities to be very affordable.

But if you are coming from somewhere else, such as the Midwest, you need to look at a long-term budget and make sure that your employment situation is going to support living in these cities in a few years. Whether you plan to be there for just a couple of years, or the rest of your life, being financially prepared is one of the greatest securities and the key to a happy and healthy life.

Living in Phoenix vs Denver, Colorado

Are you thinking of moving to Phoenix? If so, reach out to me at AZLiveStyles, I would love to help you find your next home in the Phoenix Metro Area!

← Moving to Arizona vs. Colorado 5 Things to know about the housing market before Moving to Phoenix → 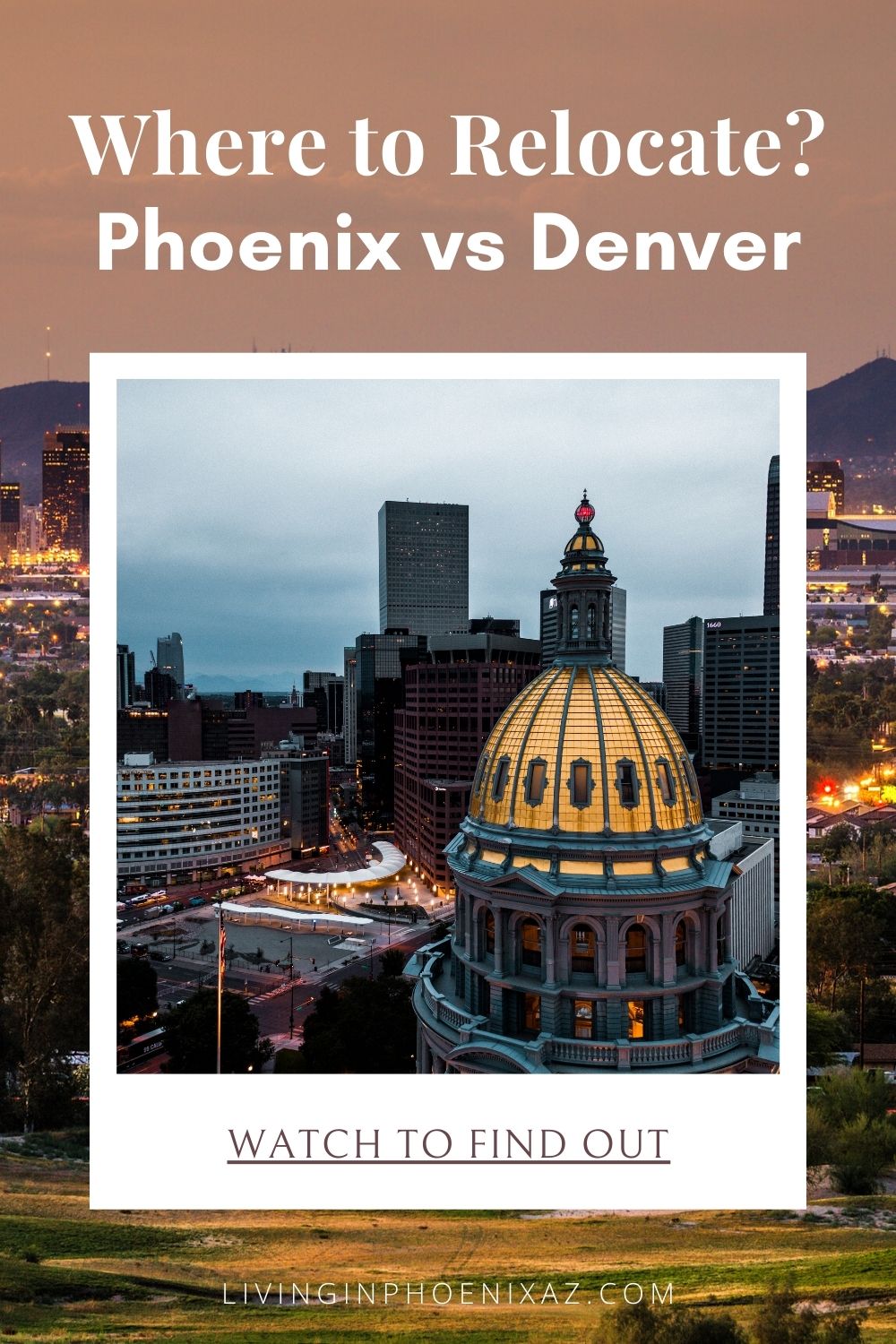 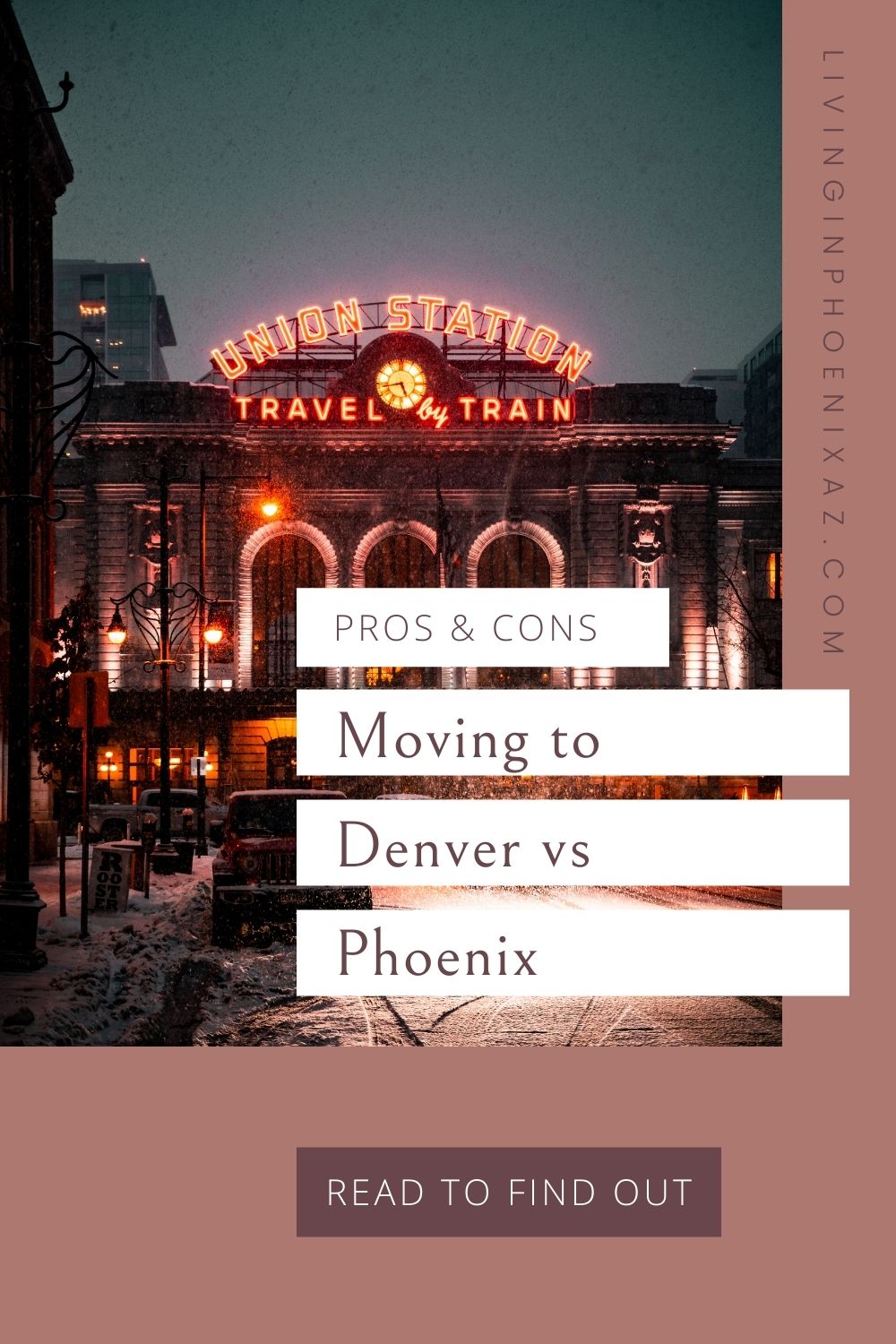 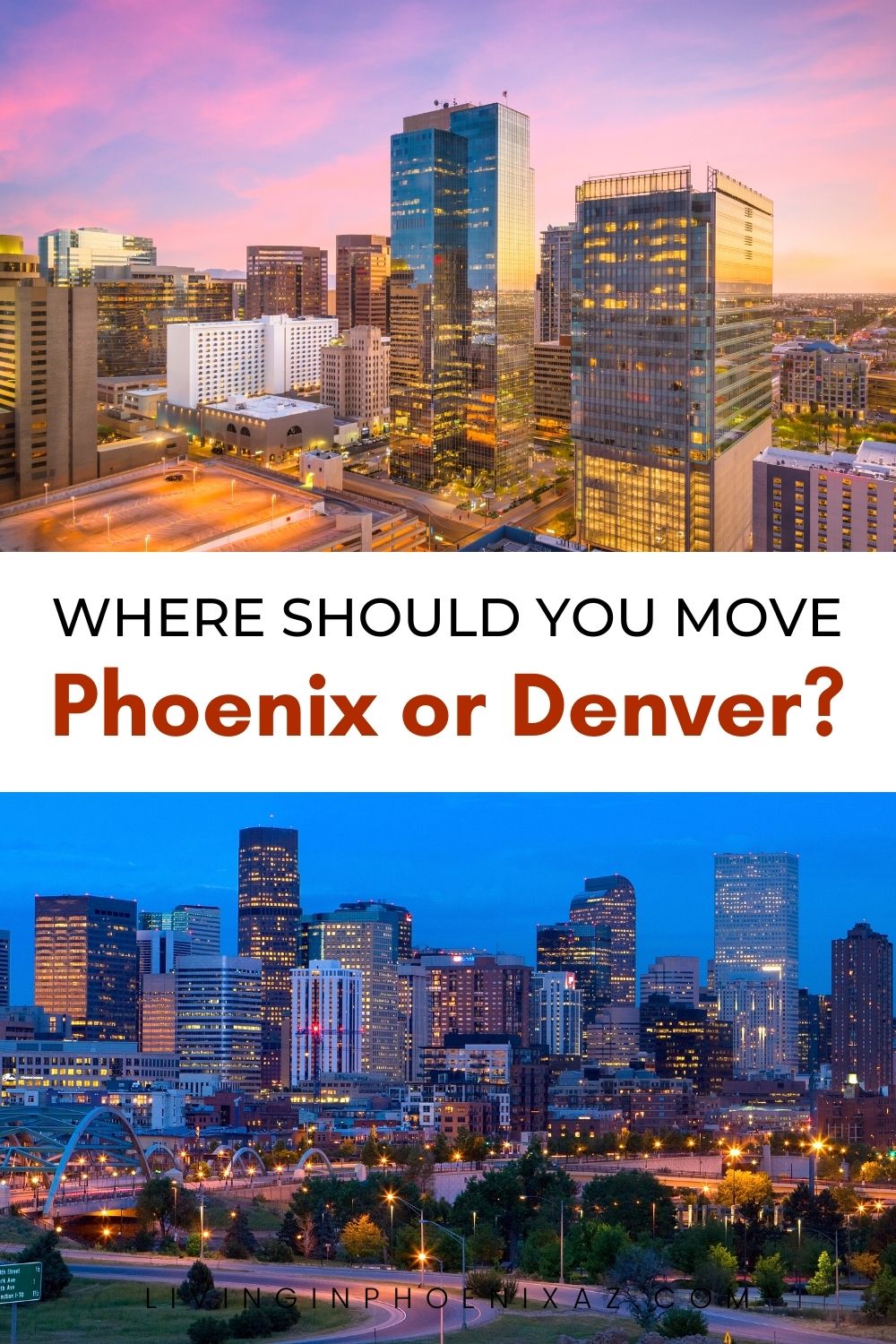 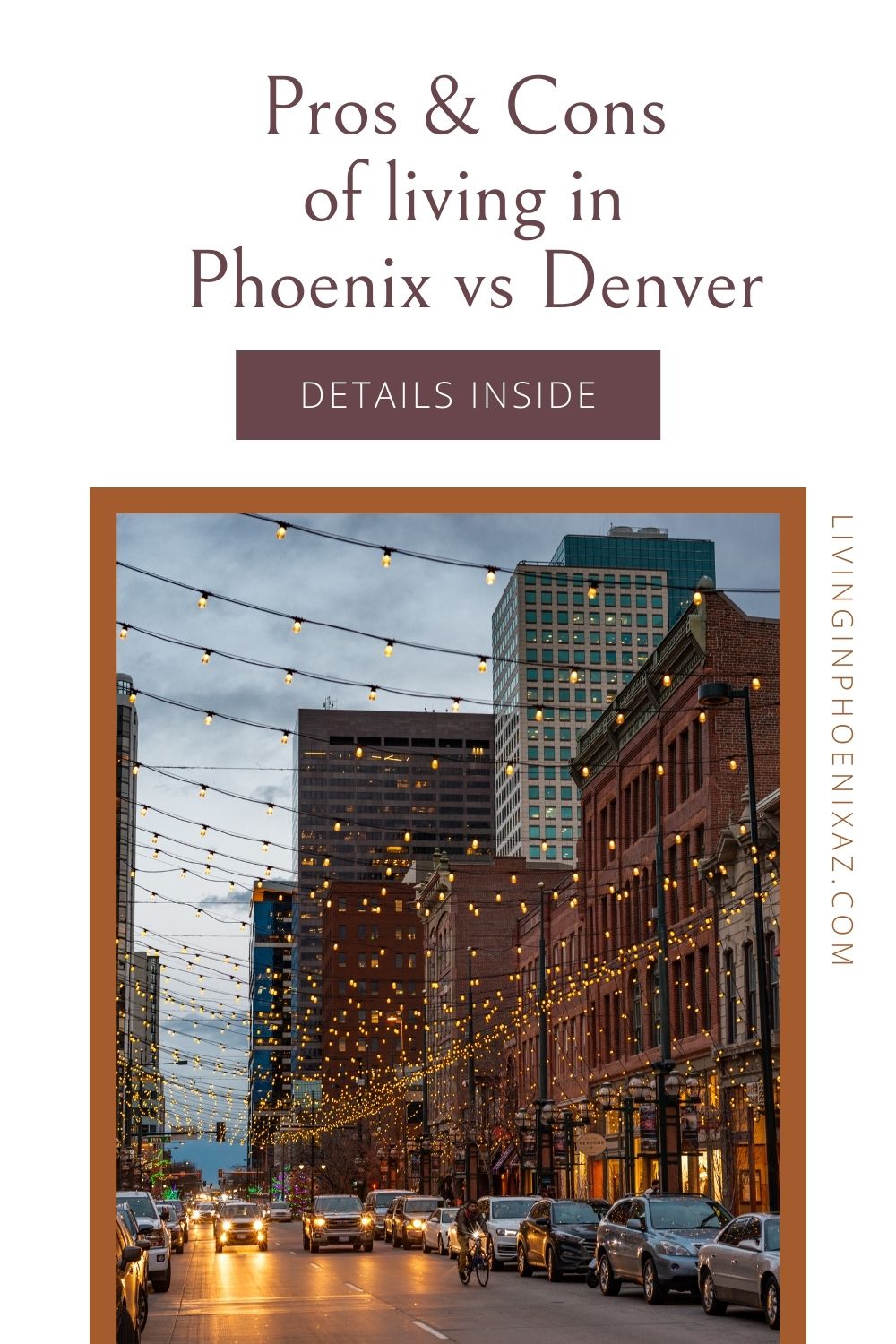