Get to know the areas of Phoenix

So, you’re moving to Phoenix, Arizona? Congratulations, Phoenix is one of the best places to live in America. It’s also one of the biggest, and finding the right Phoenix neighborhood to call home can be daunting. With so many options (and so many opinions!) it’s hard to even know where to start. No matter where you chose to settle down, living in Phoenix is beautiful, relatively affordable, and offers a high quality of living. Let’s take a broad spectrum look at some of the best suburbs of Phoenix and what life looks like there.

East Side or West Side of Phoenix?

The Phoenix Metro Area is really, really big. Trying to narrow down a single neighborhood if you are moving to Phoenix from out of state can be nearly impossible. You can try throwing a dart at a map of Phoenix and hoping fate favors you as it chooses your next home, or you can try to isolate a few areas of town based upon your personal needs and lifestyle.

Darts are great, but they belong in dorm rooms and dive bars. To narrow things down a little, let’s take a look at life in the East Valley vs West Valley.

The East Valley of Phoenix is densely populated and bustling with activity. The Phoenix airport is located in the center of town, so for those who travel often, the east side can be advantageous. Scottsdale, Tempe, Mesa, Gilbert, and Chandler are all popular East Valley suburbs. Generally speaking, the east side of Phoenix is more established and perhaps more conventionally popular than the west side.

If you are a young professional who wants to mingle at the bars, or you just want more options for entertainment like sports and shopping, the East Valley could be a good fit for you.

Closest to the epicenter of the action, Scottsdale is the closest of the east side suburbs to Phoenix proper, and has one of the most well-known entertainment districts in Phoenix: Old Town Scottsdale.

Tempe is nearby and shares a similar vibe, as Tempe is home to Arizona State University. Mesa, Gilbert, and Chandler all offer much to do and see, but have a bit more of a family-friendly atmosphere.

The East Valley has great schools, beautiful neighborhoods, and the sense of community in this part of town is welcoming to both families and singles alike. 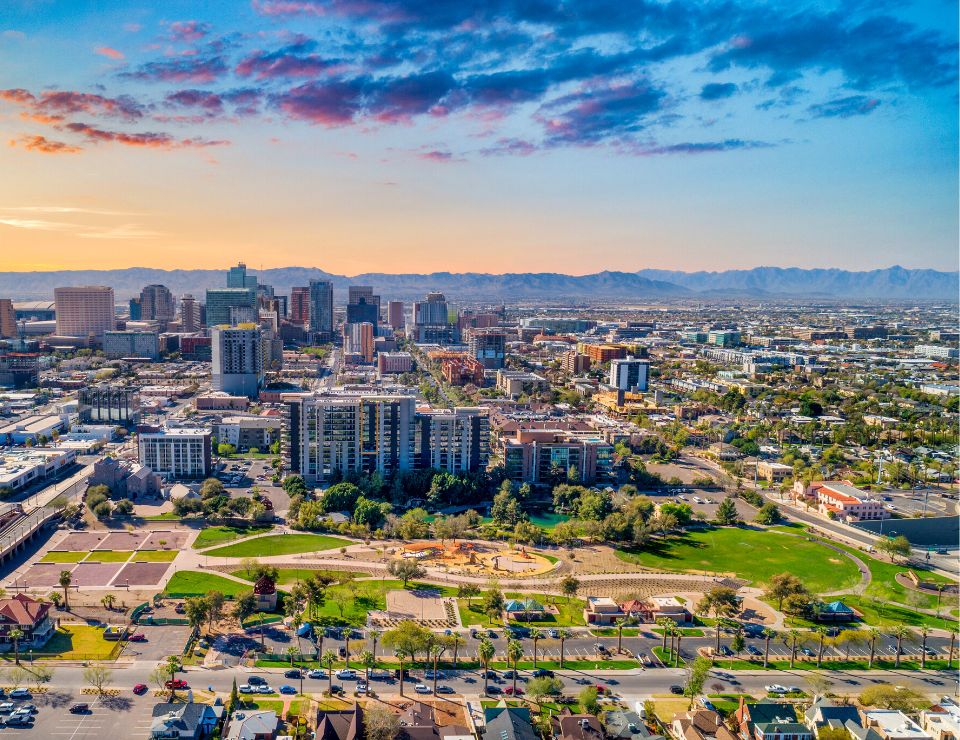 Learn More: The Six Cities are leaving to Move to Phoenix

As the Phoenix Metro Area has grown over the years, the expansion has had to push westward into the open desert. This means the West Valley is newer and more spread out. Opinions vary, and some Phoenicians consider the west side to be less desirable, or “full of nothing to do.” This certainly isn’t the case, having things to do is all about your desires and your lifestyle. If you want to have a bigger home, larger yard, and maybe room for a boat or more cars, the West Valley is a much better place to find that.

Glendale, Peoria, Surprise, and Goodyear are all popular west side suburbs that offer most of what you can find on the east side, but at a fraction of the price. Traditionally, the West Valley has been considered the more affordable side of Phoenix, however that’s changing rapidly.

As neighborhoods like Glendale and Peoria grow and become hubs for relocating families, the housing prices have shot up over recent years. The west side also tends to be viewed as a place for families, not singles. This doesn’t mean you can’t live on the west side if you don’t have a family, but there might be fewer options for entertainment with your peers. 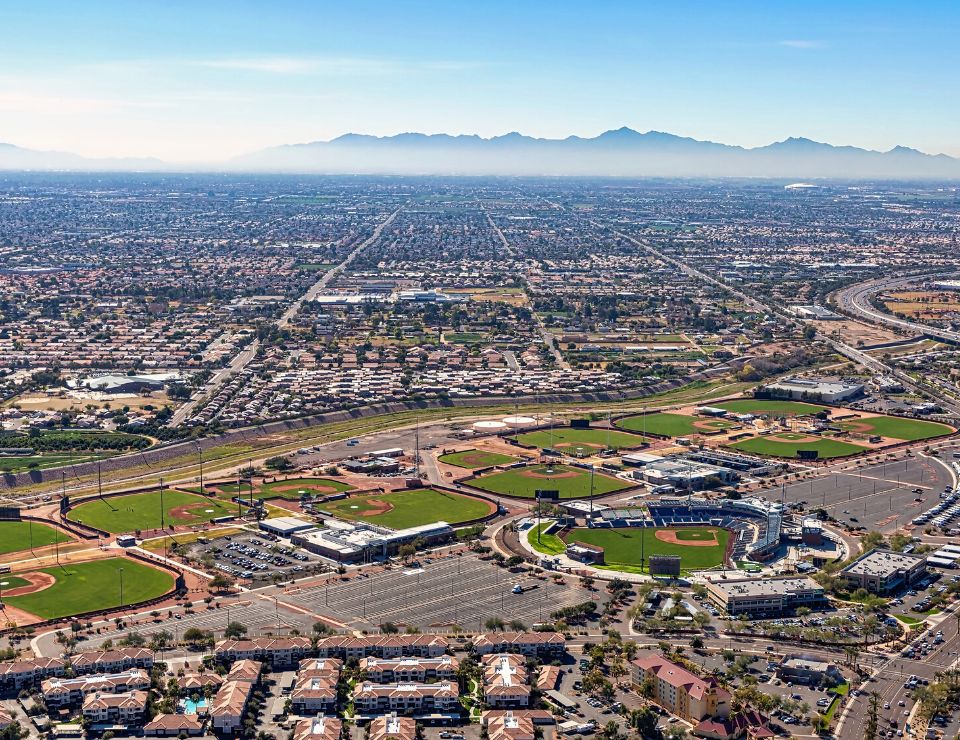 Let’s dive into the Neighborhoods of Phoenix to know about

Like Arcadia, Scottsdale is one of Phoenix’s oldest neighborhoods. Scottsdale is rather large, too, divided into northern and southern parts of town. If you want to live close to all the action of Old Town, you’ll pay a premium for the location. Even if you live in one of the older neighborhoods in Scottsdale and Tempe, you’ll pay more for smaller homes that may be in need of repair. This is just a competitive part of town to find a home in. 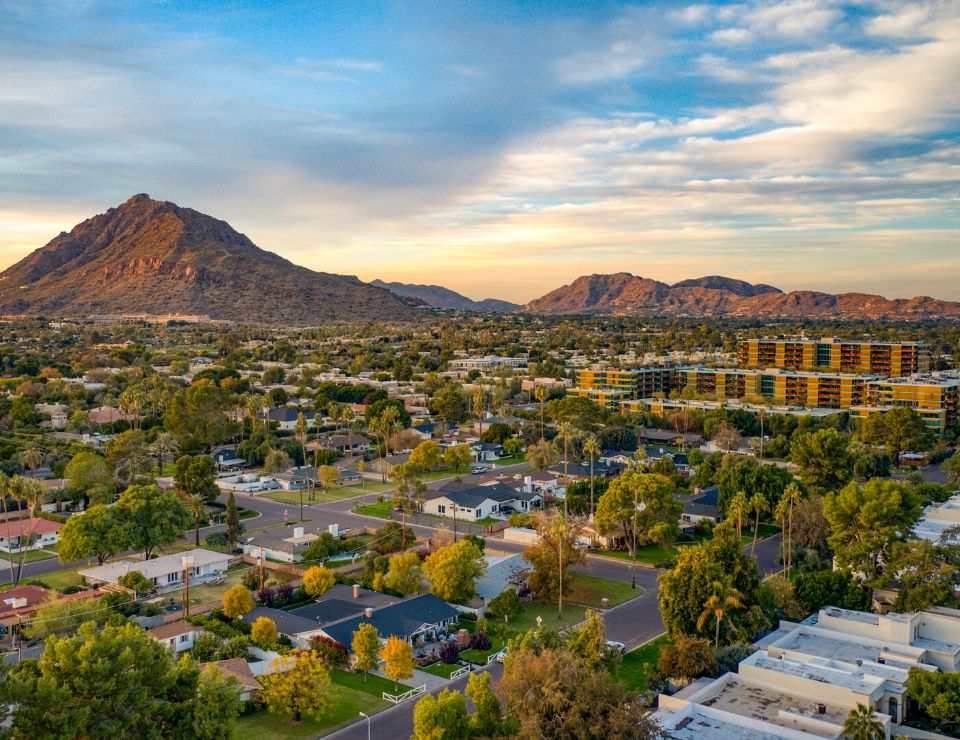 Learn More: Fun things to do in Phoenix, Arizona

We’ve touched on some of the most expensive places in the valley, and some of the best entertainment, but there is more to the east side than bars and big houses. Gilbert and Chandler are well known neighborhoods that offer all the amenities of the east side with a family-friendly spin. The schools are exceptional, and there are plenty of ways to get out and enjoy a weekend day with the whole family. Both Gilbert and Chandler have well established entertainment districts, so you don’t have to go all the way into the city to find a great place for dinner or go catch a movie.

If you want to live on the east side but you aren’t looking for an expensive neighborhood or plenty of nightlife, Mesa is certainly worth checking out. Mesa is a great place to raise a family, as the East Valley schools are hard to beat. There isn’t as much going on in this part of town, but the neighborhoods are beautiful, and the environment is friendly. Mesa is a great location if you want to be near enough to everything the East Valley offers, but not right in the middle of it. 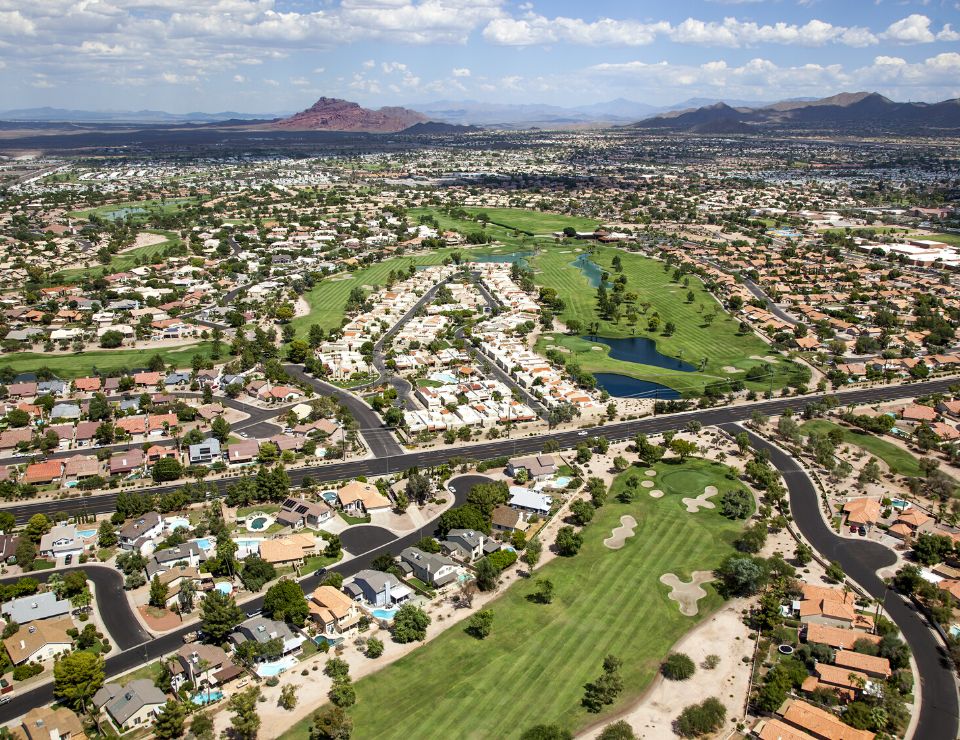 Nearly as popular as Gilbert and Chandler, Glendale and Peoria are the family friendly counterparts of these neighborhoods, they are just on the west side. The West Valley is constantly growing, so Glendale and Peoria are newer to the game when it comes to premier Phoenix suburbs, but they hold their own none-the-less. If you want to find a big, new home, near new construction amenities, both of these suburbs are great choices.

As the west side grows, Buckeye and Goodyear are two of the West Valley’s fastest growing neighborhoods. These once quiet areas are now bustling with activity and continue to expand each year, so if you want to live in a new and improving part of town, these are both great options. Because they’re on the less populated west side, homeowners can once again get more bang for their buck. As amenities increase to accommodate this growth, Buckeye and Goodyear are becoming some of the most popular new-growth suburbs of Phoenix.

Learn More: The top five cities to live in PHX

Phoenix is massive, and spread out, so choosing a place to live that is accessible can be key. You might not really care to go into the city. If so, some of the far-side neighborhoods might be just right for you. But if you want to be able to easily commute around town, there are a few key highways to make note of. There are no toll freeways in Arizona, so luckily, no matter which route you choose, you won’t get hit with fees.

Running east to west through the city, 10 takes you all the way to the west coast if you so desire. If you head to the east more often, 60 also runs through town and gives access to the eastern parts of the southwest United States. The 202 Loop goes around the East Valley cities, and the 101 Loop takes you around the West Valley cities. As the West Valley continues to grow, the 303 Loop is now providing access to those really far out west side neighborhoods. For the most part, unless it’s peak traffic hours, you can get from one end of Phoenix to the other in about an hour. 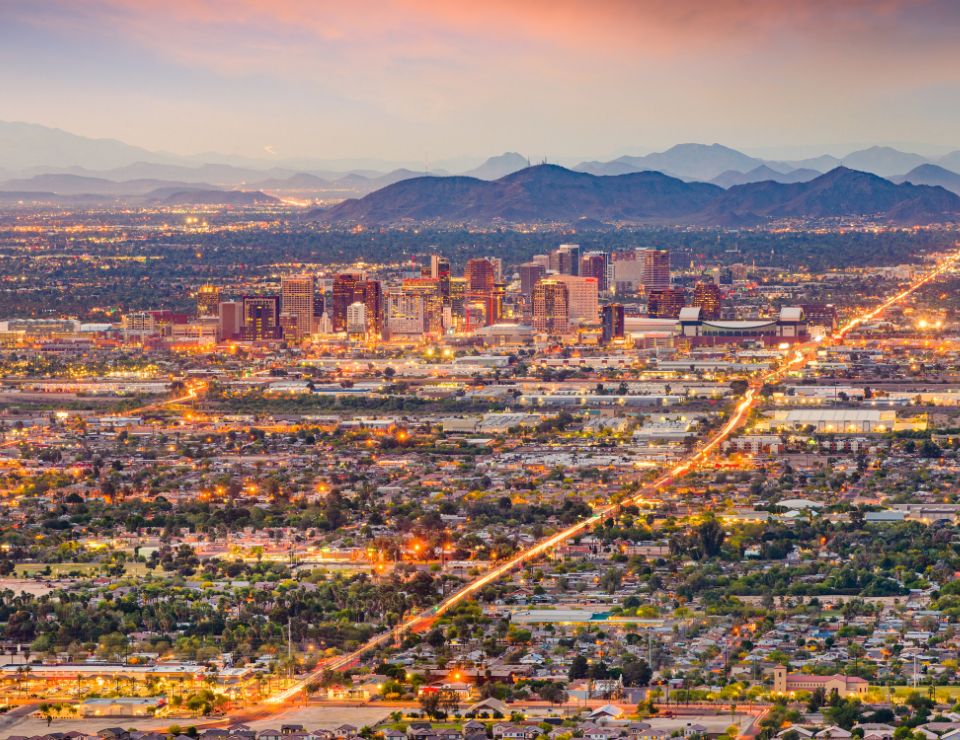 Which part of Phoenix is the safest place to live?

Keep in mind when you are looking for a place to live in Phoenix, that just like any big city, there are good and bad parts about every part of town. While in the past the West Valley has gotten a bad rap for a high crime rate, the truth is, there is plenty of crime in the East Valley, too. Even in high end neighborhoods, you will occasionally see break ins and vandalism.

You will notice in every neighborhood that you will see very tidy, safe looking neighborhoods just a few blocks from less than savory looking streets. This doesn’t mean you should be afraid to live anywhere in Phoenix, it just means use your best judgment. If you are attracted to any certain area, take a drive around. See what the streets look like at different times of the day. Most of all, keep an open mind, you might be surprised to find a neighborhood you hadn’t even considered end up at the top of your list.

Ready to move to Phoenix, Arizona?

Are you ready to move to Phoenix, AZ? Reach out to me today at AZLiveStyles, I would love to answer those questions and help you narrow down a few neighborhoods.