Living in Phoenix vs Tucson

What is life like living in Phoenix vs. Tucson? If you’re looking for a Reddit-worthy, TL;DR breakdown of the two, it looks something like this:

-Tucson: More snowbirds, bigger mountains, quiet, nothing to do.

Now let’s assume you’re searching for a factually supported comparison that looks more like a Venn diagram and less like an article headline from The Odyssey. Based on population, cost of living, weather, job market, entertainment, and politics, this is what life really looks like living in Phoenix vs. Tucson.

Population of Phoenix vs Tucson:

Arizona’s capital city is also its largest city, so it’s no surprise that Phoenix is more populated than Tucson. The Phoenix Metropolitan Area has a population of over 4.5 million residents. Within the city limits, the population is just around 1.7 million. Yes, that’s a lot of people, but perspective is everything. Just within Los Angeles city limits alone, over 4 million people reside. Add into consideration all of L.A. County, and you have over 10 million. This is one of the many reasons Phoenix is an attractive alternative for California transplants seeking life in a temperate climate without living in a beehive. 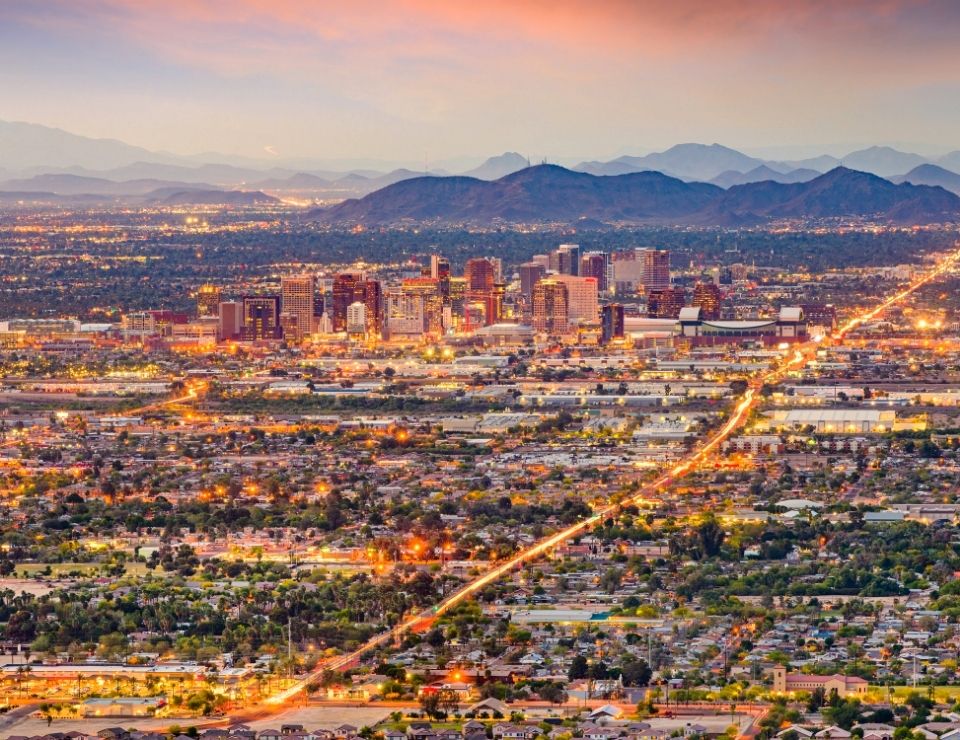 Both Tucson and Phoenix have shown population growth in recent years, but Tucson isn’t growing quite as rapidly. Yet even with a slower growth rate, Tucson is Arizona’s second most populated city. This makes it a great middle-ground for those who want the amenities of a big city, but want to live a quieter lifestyle.

Tucson has a population of about 570,000 and just about 2 million within the surrounding area. A town of 2M is not small, but you will definitely have more room to yourself in Tucson than you will in Phoenix. There are parts of Tucson that are more metropolitan, but considering Phoenix is three times larger, if city living is what you’re looking for the choice is pretty clear.

Cost of Living between Phoenix & Tucson:

The cost of living is higher in Phoenix than it is in Tucson, but only by 3%. That difference isn’t likely to break the bank. The average home price in 2020 in Tucson was just over $200,000. In Phoenix the average was $250,000. Apartment living (renting) tends to be more affordable in Tucson, likely due to the quick tenant overturn in Phoenix.

With the housing competition and a large percentage of young people (who might not have the best credit, ample funds, or long term plans for their residence) apartment rent in Phoenix is expensive. In Tucson, the older population tends to be less transient. If someone is only going to rent a space for a year or two and then leave, landlords want to get as much for those spaces as they can.

Though you can’t argue with solid data, it’s important to note that these numbers may be misleading; it’s fairly difficult to find anything in Phoenix for $250,000. This number takes into account the low prices of homes in very undesirable areas, and a city the size of Phoenix is destined to have a few of those. Over the past few years, housing costs in Phoenix have skyrocketed, forcing many to flee to more affordable areas. Even with home prices driving up nationwide in the last year, Phoenix has still been hit harder than Tucson. 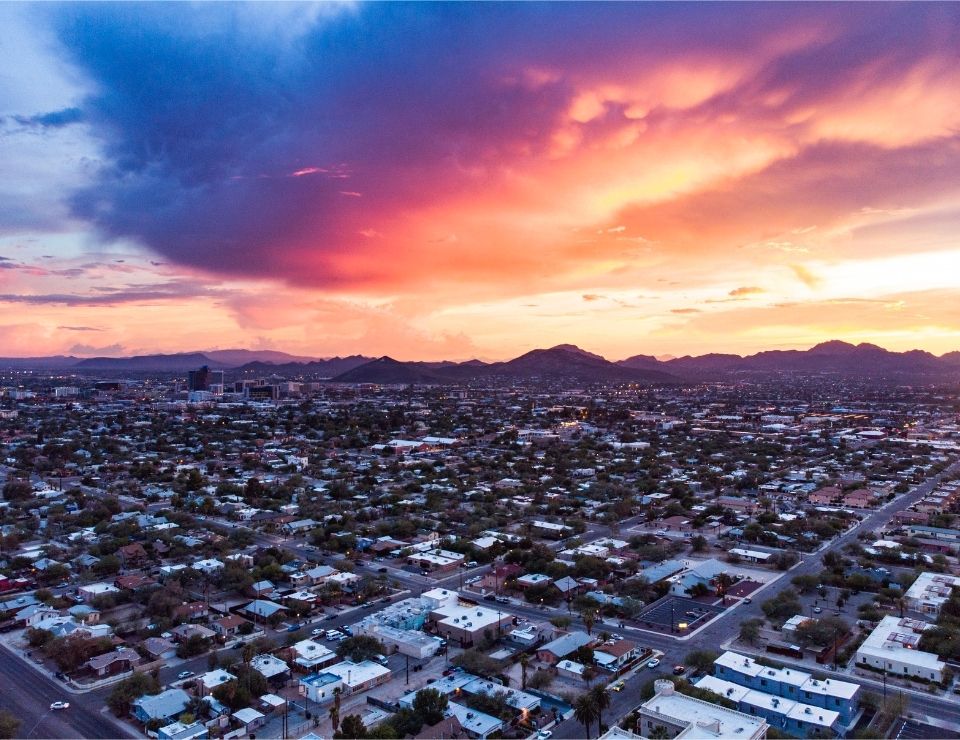 Learn More: What is the cost of Living in Phoenix, AZ?

The desert is surprisingly diverse in landscape and climate. Though both Tucson and Phoenix are located in The Sonoran Desert, they vary greatly in geography. Everyone knows Phoenix is hot. It’s not hard for any city to be cooler than Phoenix. Despite being closer to the equator, Tucson is indeed cooler, many residents claim by even ten degrees.

In reality, the lapse rate indicates a loss of 3.5° per 1,000 feet of elevation gain, meaning the 1,303-foot elevation difference between the two theoretically only equates to about 4.5 degrees. Multiple factors can affect this number slightly (radiation, convection, condensation) but going to Tucson isn’t going to feel like summiting Everest. Likely Tucson just feels cooler due to its proximity to mountain weather, greater rainfall, and thicker foliage density.

You’ll also experience clearer skies in Tucson. A city one-third of the size of Phoenix is naturally going to produce less air pollution and emissions, but science plays in yet again. Phoenix sits in a valley, which promotes thermal inversion particularly in the winter.) Just as the name suggests, this phenomenon is characterized by a reversal of temperature behavior within the troposphere.

Because it gets so warm in Phoenix during the day, the heat generated during sunshine hours lingers on top of the cooler air that develops close to the earth’s surface at night, “capping” it and trapping the cool air and any present vapor and particulate matter. This nocturnal inversion is to blame for Phoenix’s infamous Brown Cloud. While air pollution is largely responsible for thermal inversions, even if we stopped producing missions tomorrow, the fog in Phoenix is there to stay. 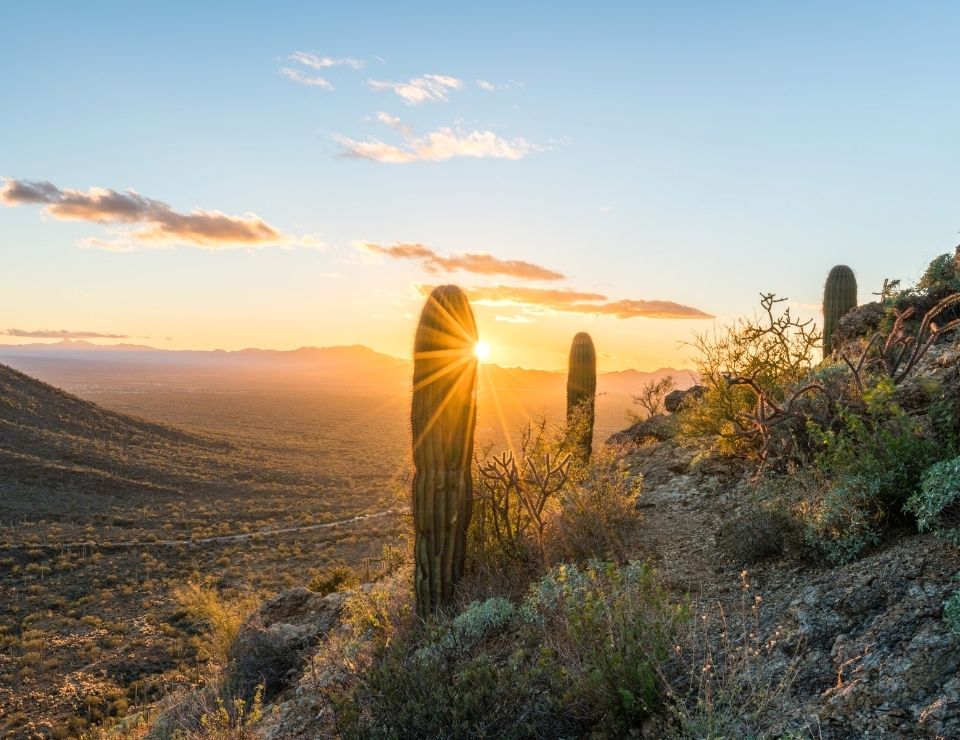 Learn More: Top Things to know before Moving to Phoenix

The job market is significantly more saturated in Phoenix, so if you are young and looking for a great place for career growth, it can’t be beaten. Phoenix is also home to a growing tech industry, almost simulating a mini Silicon Valley. Tucson certainly isn’t without opportunity for career growth, but the industries it caters to are more specialized. Tucson is an excellent place to look for work if you are working in the healthcare or aerospace industries.

If you travel for work, both Tucson and Phoenix have international airports, but the larger, newer, and nicer Phoenix airport sees more traffic. Travelers from Phoenix will have an easier time finding direct flights as well as more date and time options.

It’s also important to note that much of the Tucson population is living off of retirement funds. The population of Tucson is undoubtedly older than that of Phoenix, and often people come to the area after they have retired. They don’t actually have to “make” money in Tucson. When it comes to options and greater opportunity, you’ll have more of that in the strong job market of Phoenix.

Things to do in Phoenix vs Tucson:

Here’s a truncated and generalized synopsis: Phoenix has better nightlife and dining, Tucson has better hiking and outdoor activities. (Insert Phoenicians having a conniption over the intimation that their beloved hiking is subpar.) The desert geography in Tucson has much more to offer when it comes to subalpine adventures.

The Santa Catalina Mountains in Tucson are much taller than the Phoenix Mountain Preserve. At its highest point, Camelback Mountain, these peaks reach only 2,706 feet in elevation. Mt. Lemmon, the apex of the Santa Catalina range, peaks at 9,157 ft. This higher elevation allows for more cold weather plants and animals to inhabit the area, and snow to fall during the winter months (hello ski season!) The mountains in Phoenix are sans snow and very exposed, with little foliage to provide respite from the sun. You can drive to cooler and greener areas, like Flagstaff and Sedona, but both are more than an hour away.

If you enjoy going out to eat or trying out a new brewery or bar, Phoenix has Tucson beat by a long shot. Scottsdale and Downtown Phoenix are full of restaurants, coffee shops, tea houses, and bars. For the sports lover, there is year-round entertainment.  Phoenix is one of the few American cities to have a home team representation in each professional sports league: MLB, NFL, NBA, and NHL. Concerts and festivals are frequent in Phoenix, and the convention center has a stacked schedule year-round.

There are universities in both Tucson and Phoenix, but there is no denying the “party school” reputation of Tempe’s Arizona State University. Smaller, quieter, engineering-heavy University of Arizona in Tucson simply doesn’t bring the same energy. With so much more to offer when it comes to metropolitan entertainment, Phoenix inevitably attracts a younger crowd. 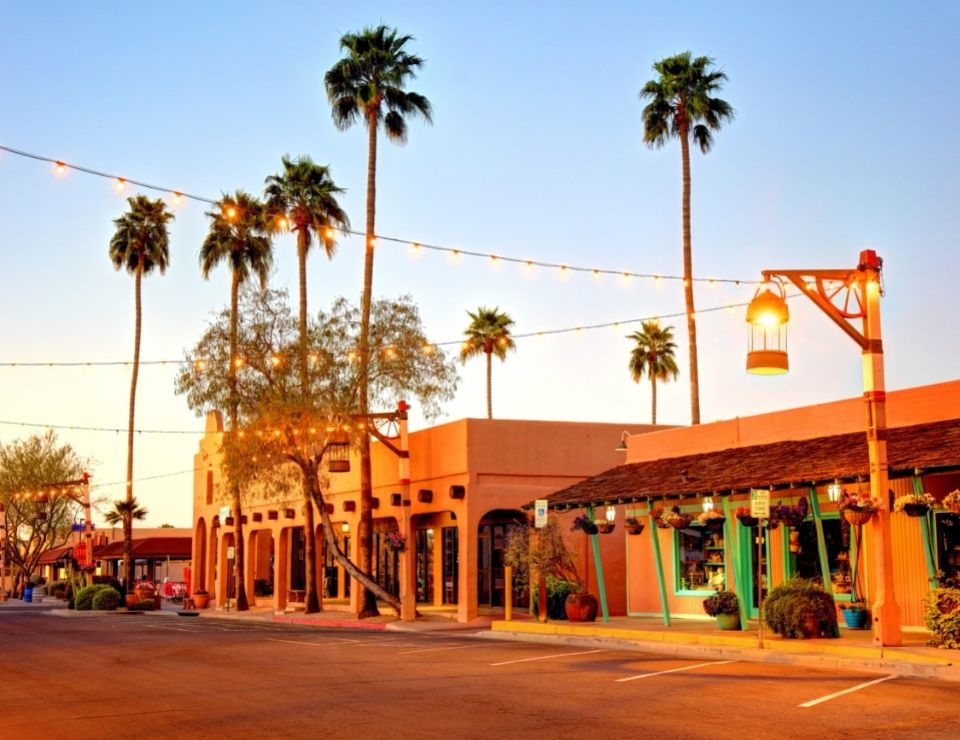 The political atmosphere of one’s city is a polarizing topic. To some, the voting habits of neighbors matters very little. Others cannot stand to live in and around those with opposing views. Generally speaking, Tucson is a blue city and Phoenix is a red city. Neither city, however; swings very far in either direction.

There are parts of each town in which you’ll see more of a certain political view; such as universities being a hub for liberal views, and the suburbs being more conservative. Try not to put too much thought into the politics of a state that has in recent years become a swing state. There are plenty of Democrats in Phoenix and Republicans in Tucson. Most importantly, no matter where you chose to live, Arizona is considered to be one of the country’s friendliest states!

Looking to move to Phoenix or Tucson, Arizona?

Are you dreaming of desert life? If you’re ready to make the move, reach out to me at AZLiveStyles, and let me help you find the perfect place for you and your family to call home. 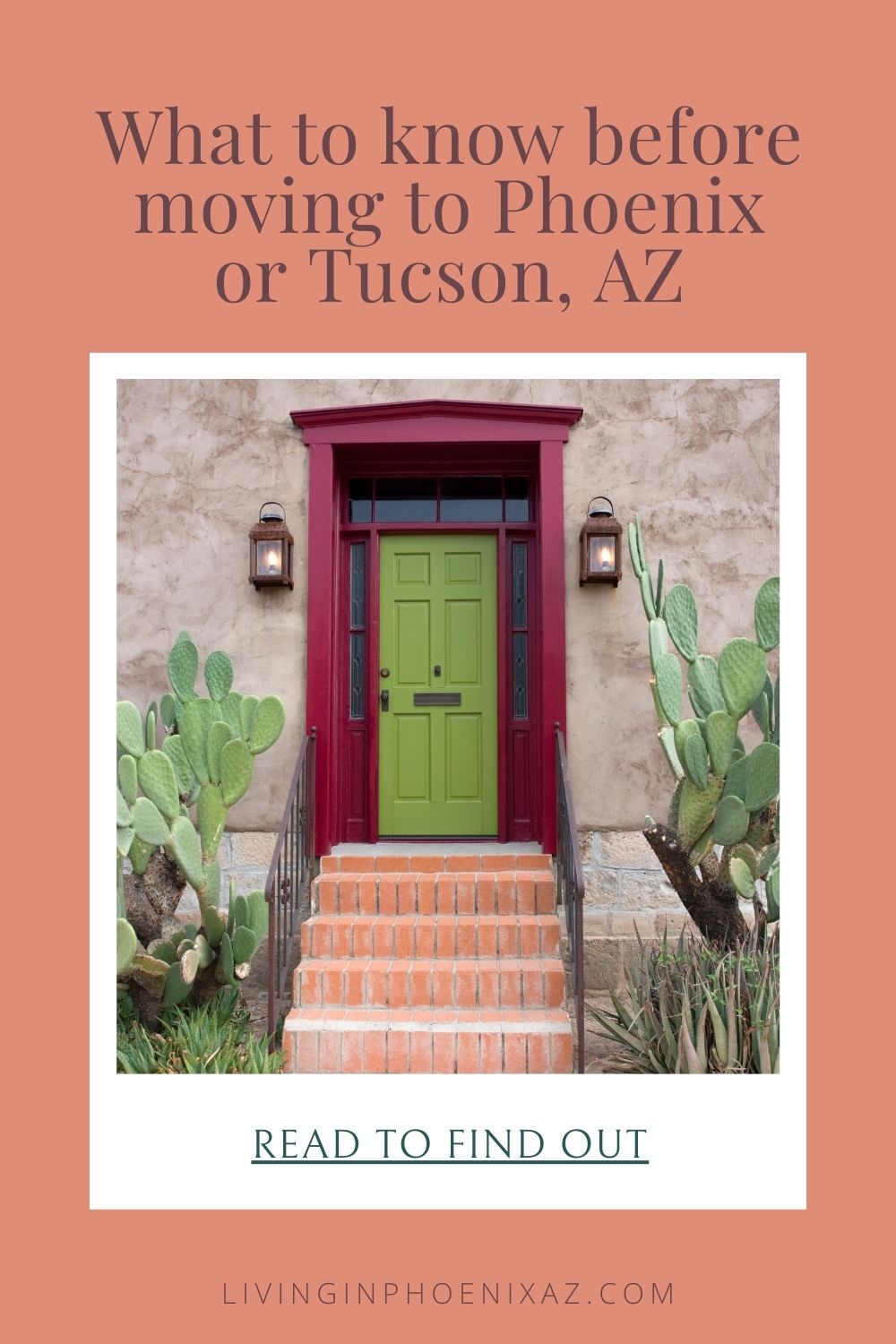 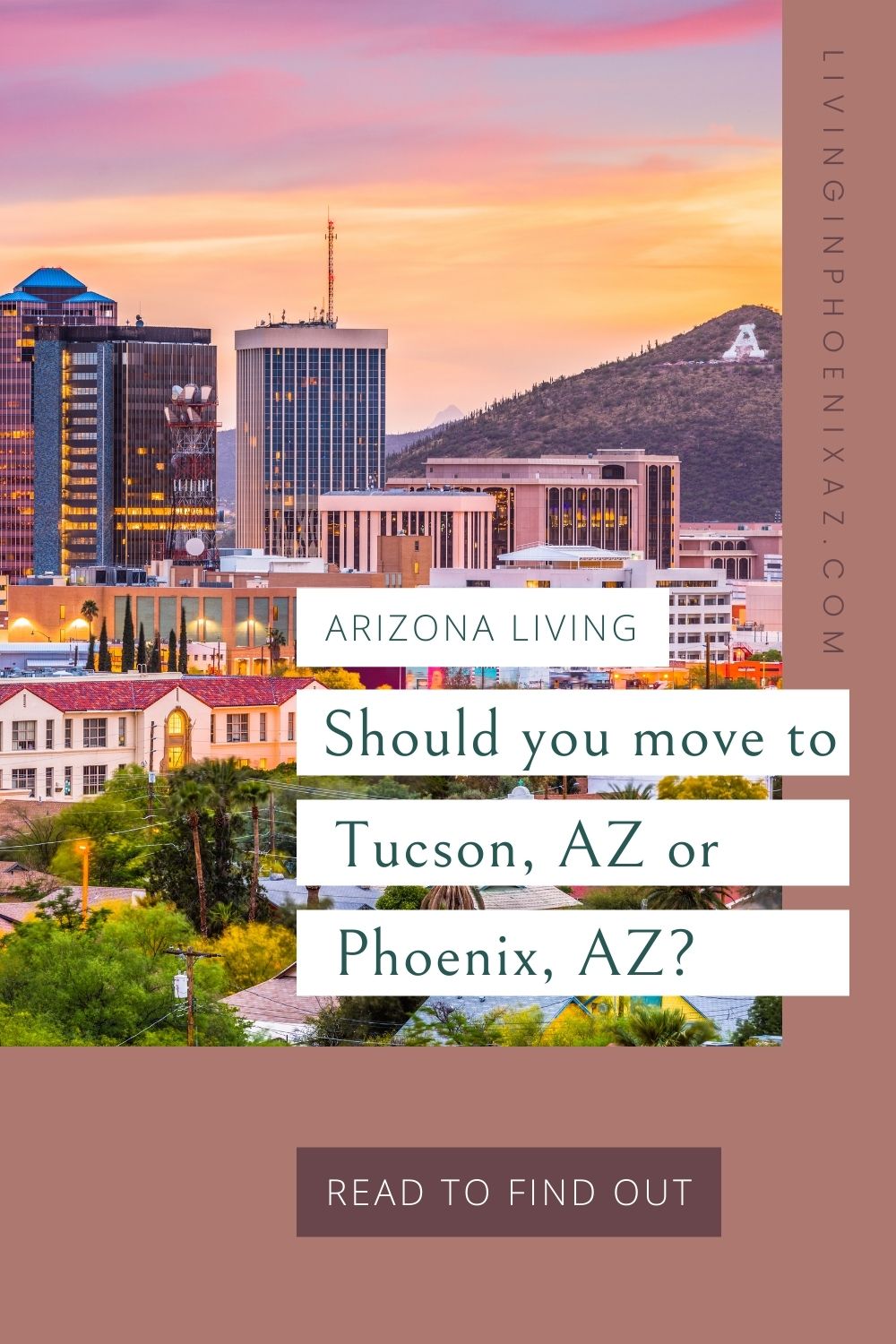 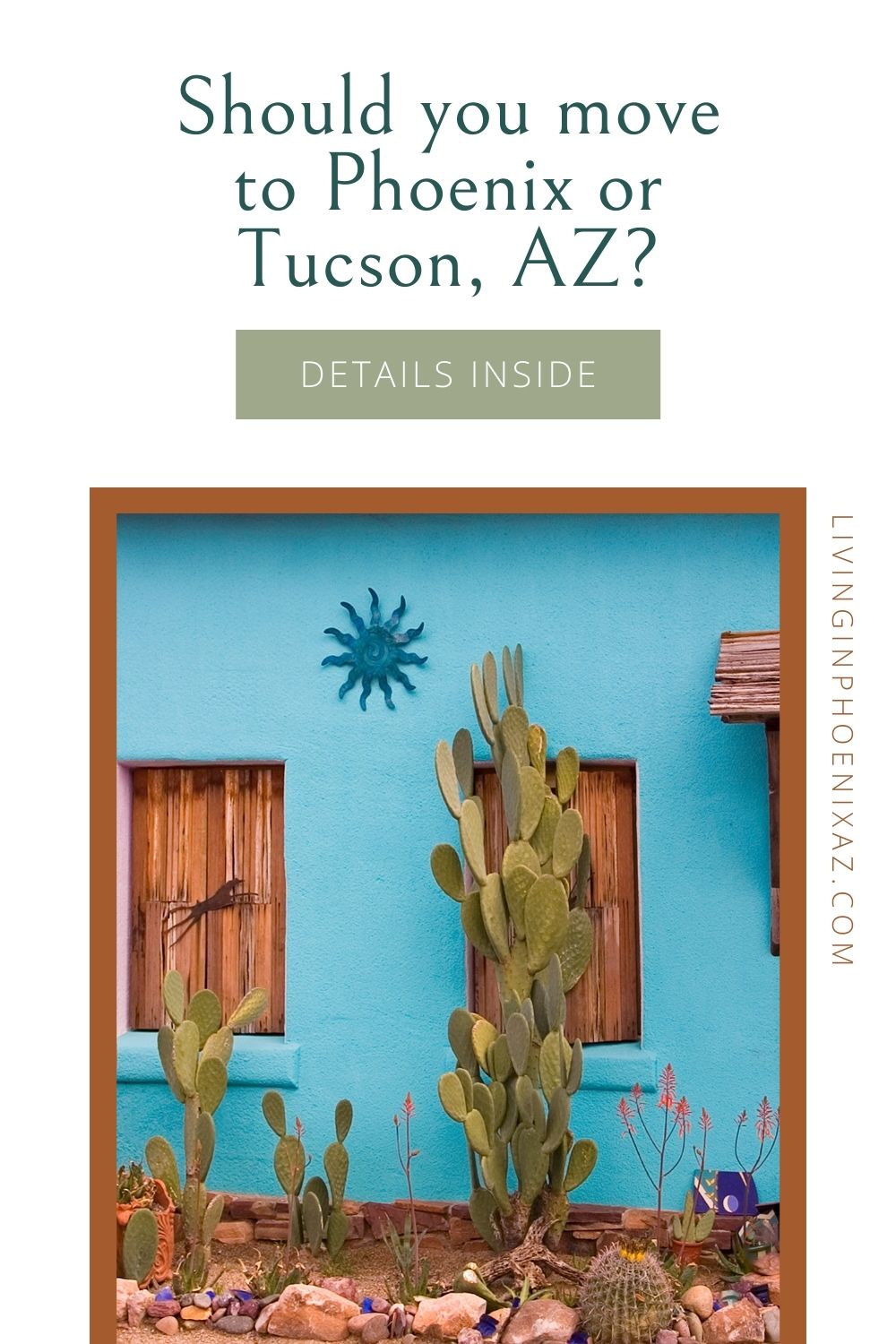 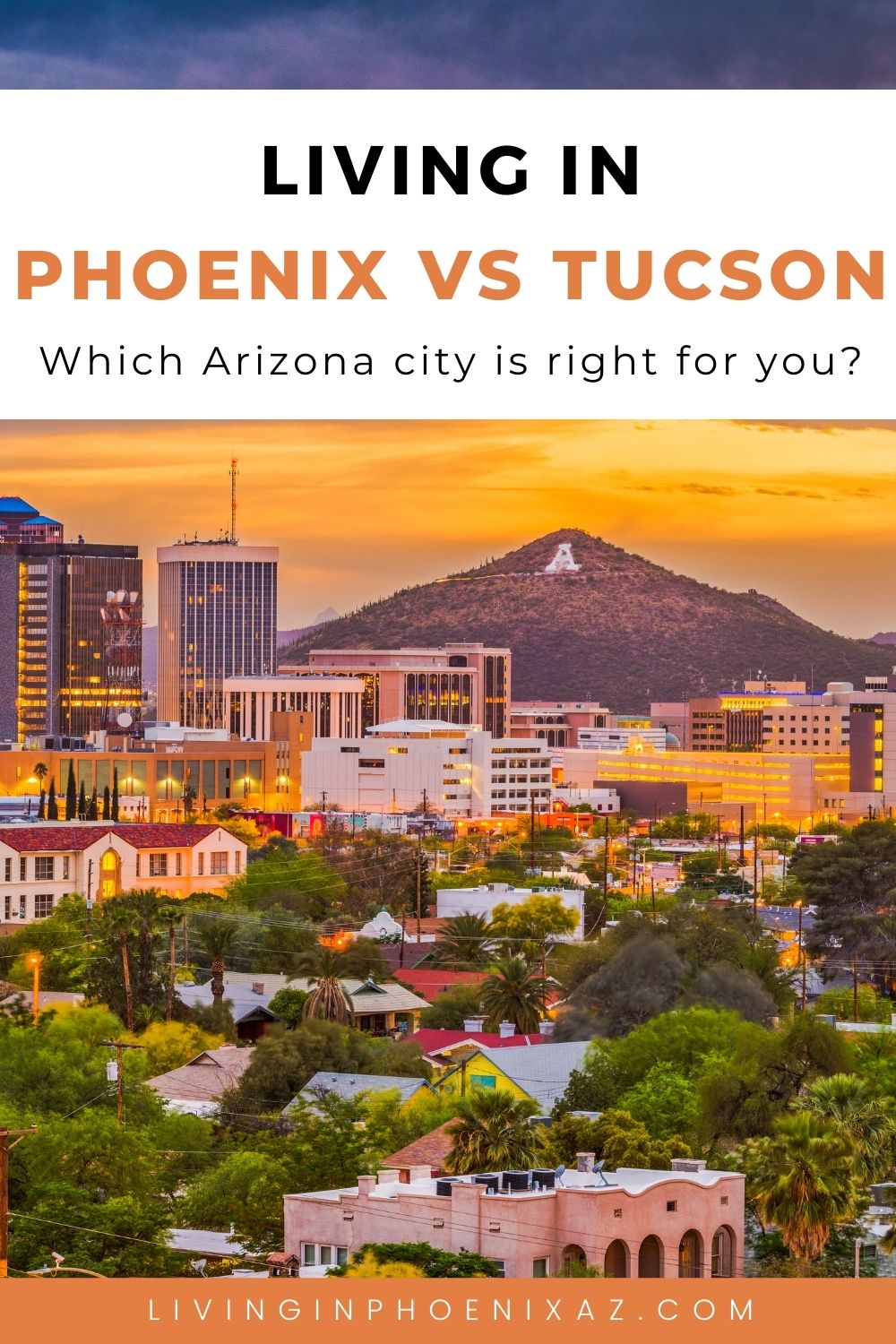