Living in Gilbert vs Chandler Arizona

Gilbert and Chandler were first incorporated as farming communities, though you’d hardly assume that by looking around today. In the 1990’s the areas bloomed with the computer and technology boom. As countless Americans flocked to these once-sleepy towns to chase careers in technology, finance, and even aerospace, the landscape of citrus farms fell farther and farther into the past.

Today, with strong economies propelling the future of these two cities, they beckon to young professionals and families looking for a place to grow both in the home and in the workforce. This Silicon Valley-like environment has made Chandler and Gilbert the southwestern hub of technology. Though extremely comparable places to call home, there are small nuances that make these two suburbs slightly different from each other.

Gilbert is consistently rated highly when it comes to neighborhood safety. Safe neighborhoods tend to attract families, and with them, school ratings go up.  According to niche.com, the public schools in Gilbert receive an A overall niche grade. This grade takes into consideration many facets of education, such as academics, diversity, and extracurricular activities. Each category is rated individually as well.

None of the categories in the Gilbert school system receive a rating lower than a B+, which is outstanding. It’s clear that the schools in Gilbert offer a well-rounded education and a safe place to grow and learn. Even in public schools (a category often oversaturated with students), the Gilbert Public School System has a student-to-teacher ratio of 18:1. 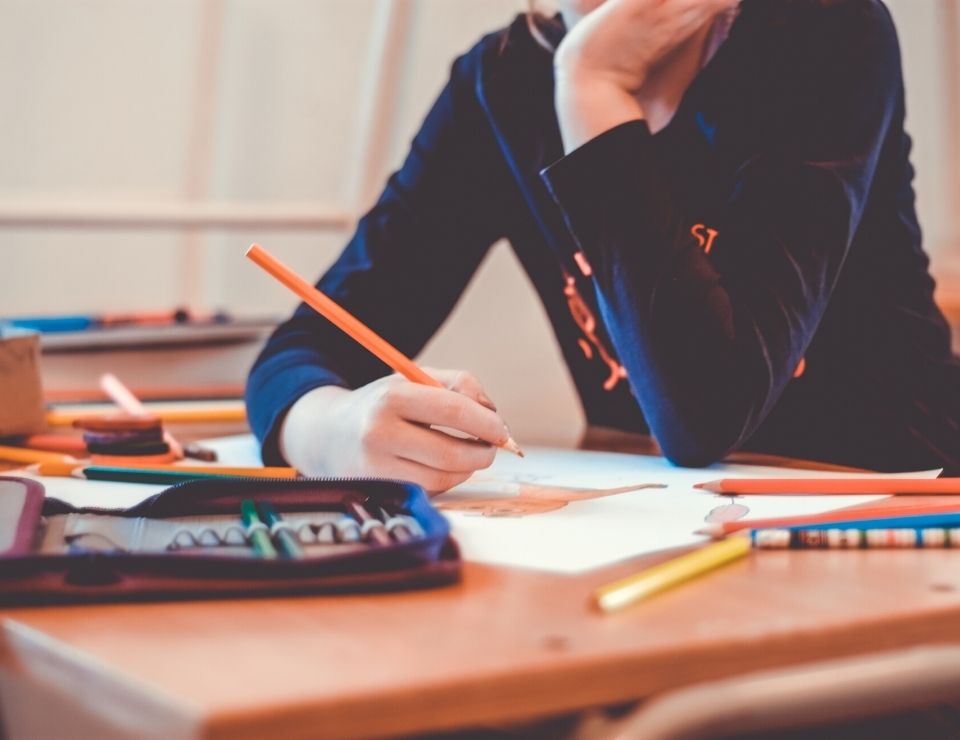 Learn More: What does $300k get you in Gilbert Real Estate?

The gorgeous landscape and temperate weather of Arizona makes it an oasis for those who enjoy getting out into the great outdoors. The Riparian Preserve at Water Ranch is an excellent place for Gilbert residents to do so. This stunning nature preserve features 4.5 miles of trails, beautiful water features, and is even equestrian friendly. Unique to this preserve is its water features designed to reuse 100% of the Gilbert effluent water. 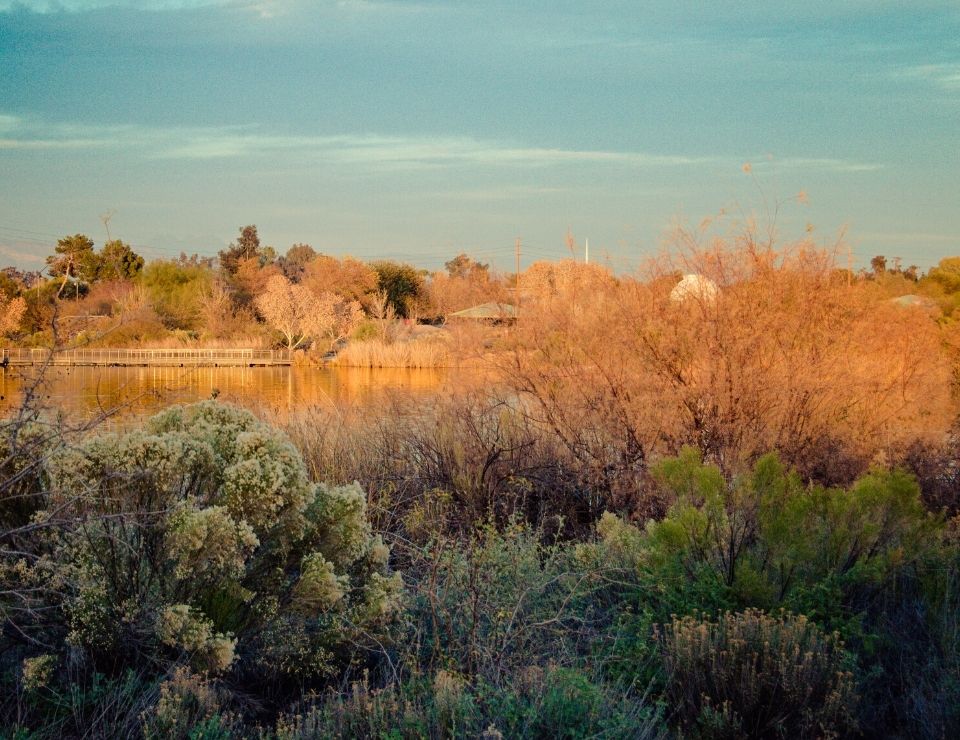 Located in southeast Gilbert is the Gilbert Regional Park. While the nature preserve is doing just that, preserving the desert nature, Gilbert Regional Park is a place where all the amenities of a city park come together, allowing residents to have a beautiful, manicured place to enjoy family time and green space. When this massive park is finished, it will contain over 272 acres of outdoor fun for the people of Gilbert. The park offers playgrounds, basketball, tennis, and volleyball courts, and even an amphitheater.

The Gilbert Farmers Market is an excellent place for locals to support sustainable agriculture as well as small businesses. The produce is of the finest quality and much of it is organic. Where else can you purchase homemade bath bombs, hot sauce, and beef jerky all in one place?! There are plenty of fun things here for the kiddos too, like free samples and face painting. Even if you don’t buy much, the farmers market is a great place to get out as a whole family and enjoy the weather and local culture. 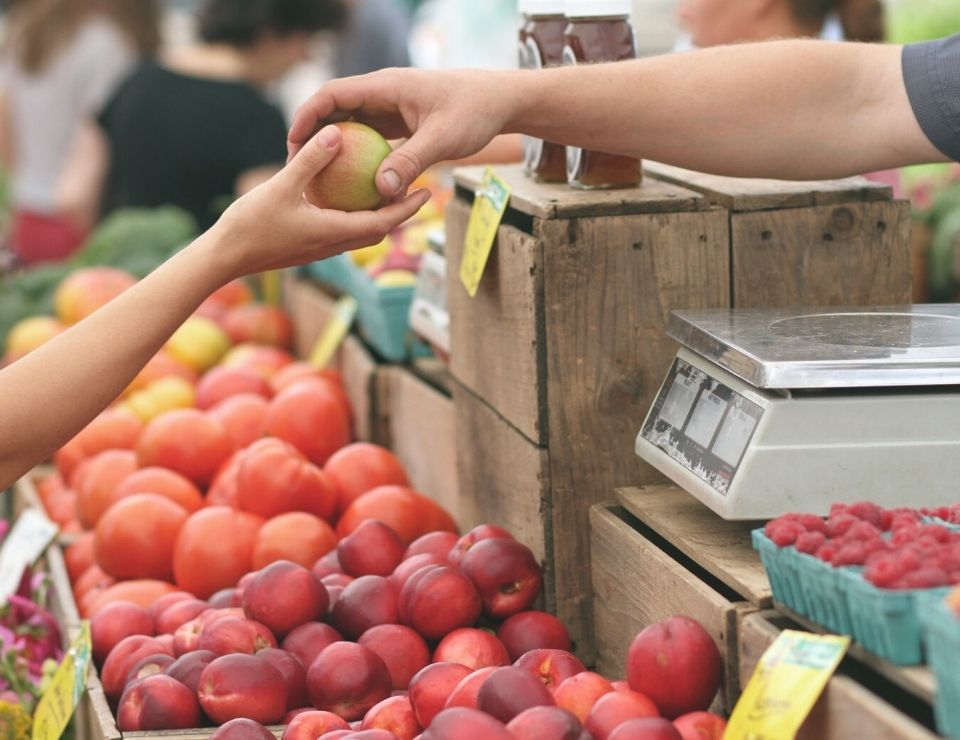 If you want to get in touch with the history of Gilbert, you must check out the Heritage District in Downtown Gilbert. The historic Gilbert Water Tower, constructed in the 1920s, originally served for storage of water for firefighting and later city water. When it was decommissioned in the 1980s, the town rallied around this beacon of desert prosperity, and through city initiative, the tower was protected, restored, and turned into a city park. These days, you can visit the tower to enjoy tower lightings throughout the year, and little ones can cool off from that desert sun splashing about on the splash pad.

Downtown Gilbert is the perfect place to catch dinner and a show (more on the dinner part below!) The Hale Theatre, a renovated historic theater, offers an exceptional theatrical season. Year-round Gilbert residents and visitors can enjoy musical, classical, and occasional workshop productions. The talent is incredible, and the production quality would make one assume they were off-Broadway, not in a little theater in the middle of the desert! 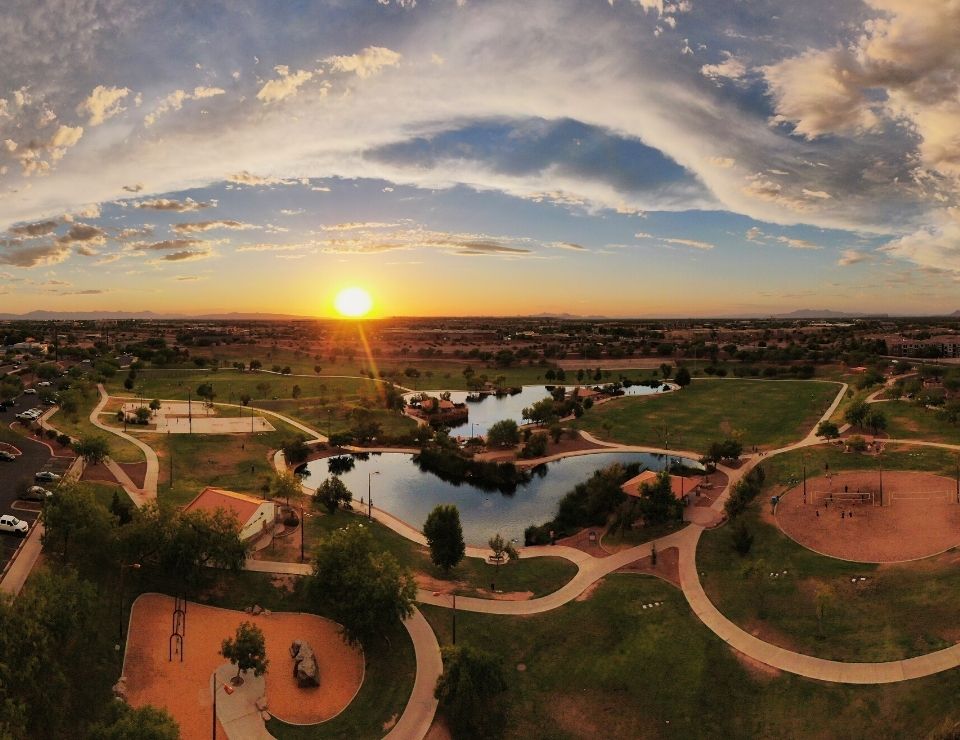 Chandler is conveniently situated in a very accessible and central part of the Phoenix Metro Area. Regardless of where you live within Chandler, you’re just a short drive from any of the major highways running through Phoenix, and a reasonable commute into the city if you’re looking to work in Phoenix but live on the outskirts. For those who travel often, the airport is easily accessible, and it’s very easy to hop onto any of the aforementioned highways, if you travel around the west and mostly drive.

It’s clear that the population of the Phoenix area has been growing exponentially over the past two decades or so, meaning new neighborhoods have popped up all over the valley to accommodate the growing number of residents. Of course, people are coming for the weather, the jobs, the affordable cost of living, but perhaps one of the biggest pros of the Chandler area specifically, is the affordability of what most Americans would consider luxury housing. Among these neighborhoods are many master-planned neighborhoods, where luxury amenities such as pools, tennis courts, paved and lighted walking paths and more, are designed into the layout of the small community, adding an extra layer of comfort for its residents. Homes nearly identical in size and appearance can be as much as hundreds of thousands of dollars less in Chandler than in other parts of town. 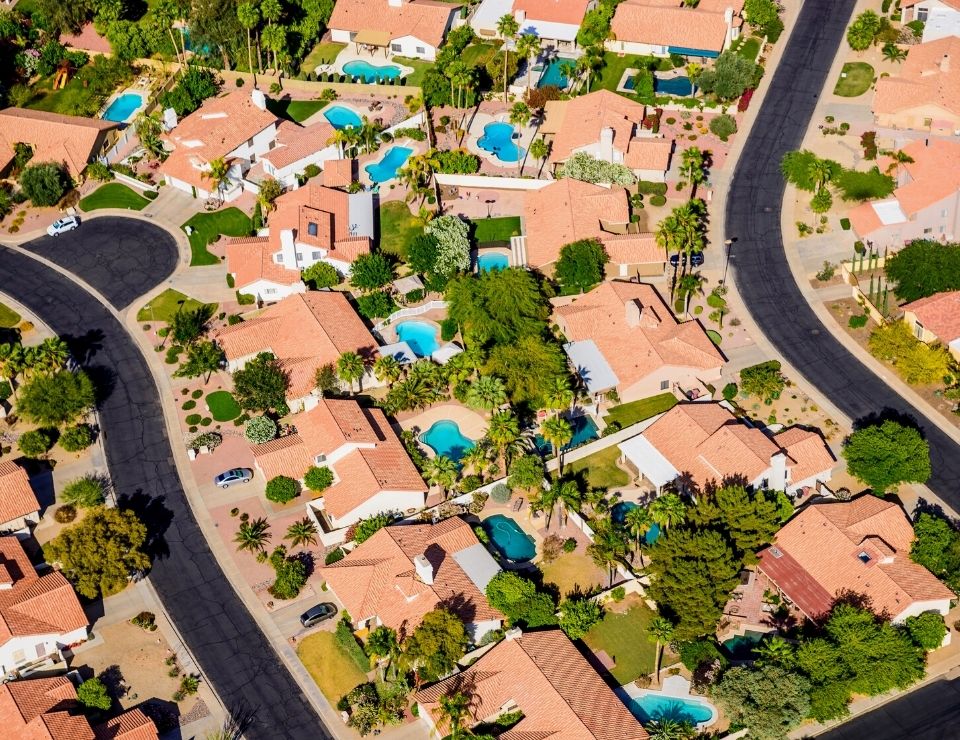 Learn More: What is the cost of living in Chandler, Arizona?

Just as Gilbert has much to offer when it comes to places to get out and stretch your legs, Chandler brings plenty to the table as well. Even landfills are usable green space in Chandler! The Paseo Vista Landfill, for example, was converted into a park once it was decommissioned as a dump. Worry not, there are no plastic bags and broken bottles emerging from the grass, the garbage is buried deep beneath the ground. You’ll see nothing but beautiful green space to enjoy for years to come. Chandler also offers a great deal of pavilions and shaded shelters for hosting events and gatherings, like parties or meet-ups. If you would like to reserve a shelter at a park near you, you can make reservations online to secure your time and space.

There are two major school districts in the Chandler Area, Mesa School District and Gilbert School District. Wherever you fall on the district grids, Chandler has wonderful public schools. Most of these schools rate very highly when it comes to graduation rates, extracurricular offerings, and attendance rates. Even if you find yourself living closest to one of the schools that isn’t the most highly rated of the bunch, there are so many schools to choose from. It’s fairly easy to find the perfect school for you and your family within a reasonable distance. 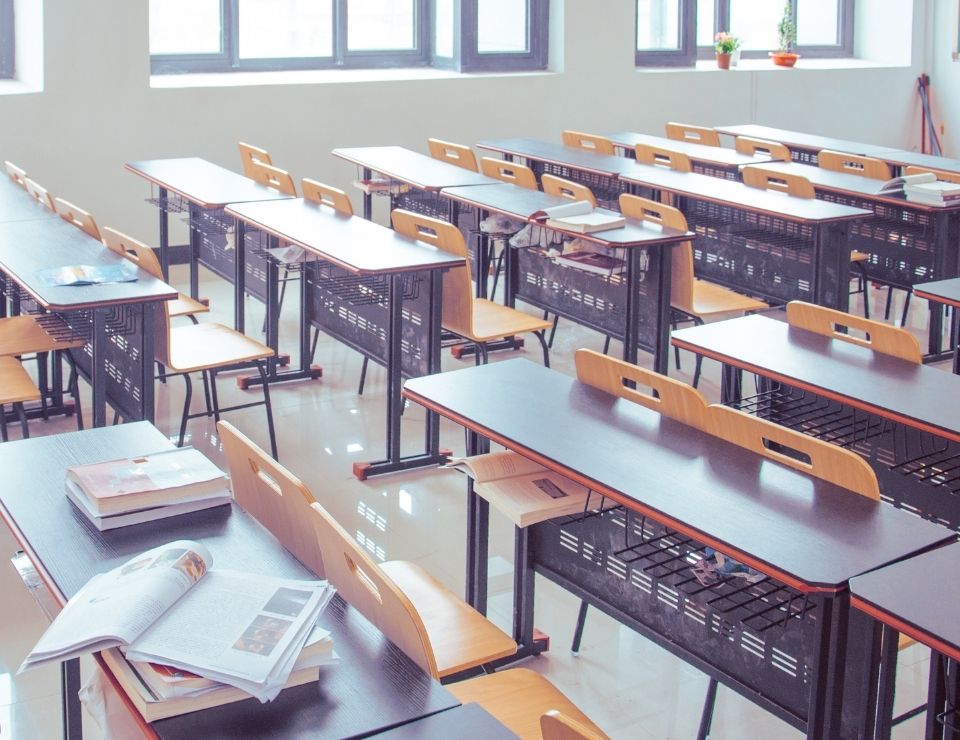 Whether you’re interested in going to a movie, or going out to eat at a fun restaurant, Chandler has plenty of great entertainment options close to home. Much like the neighborhood styles, Chandler has done an outstanding job of offering extremely similar experiences to its populace as they would find in a more expensive part of Phoenix. Chandler has aesthetically pleasing shopping centers, a great downtown with fun nightlife, and plenty of smaller local establishments to support a non-generic, unique vibe.

You’ll never run out of fun restaurants to try, or places to shop; and as Chandler grows, these areas only get nicer and nicer. While the shopping centers and restaurants are all high-end in appearance, another great thing about this area is that you can truly find something fun to do on any budget. There’s something for everyone!

If you want to chow down like the Chandler residents of yore, you can’t miss the Chandler Chuck Wagon Cook-Off. This two-day event held in the fall at Tumbleweed Ranch is a must for home-cooked vitals. Those attending get a chance to step back in time as competitors don period clothing and cook with only tools and ingredients available in the late 1800s. If you want just a little glimpse of life on the Oregon Trail, without the dysentery and perpetual fear of dying, the Chuck Wagon Cook-Off might be just the right amount of up-close history for you!

Deciding between Chandler or Gilbert?

Are you considering moving to the Phoenix Metro Area and perhaps living in Chandler or Gilbert? If so, reach out to me at AZLiveStyles, I would love to help you find your next home in Phoenix, Arizona.

← Living in Phoenix vs Living in Las Vegas Living in Silverleaf Neighborhood of Scottsdale, AZ →